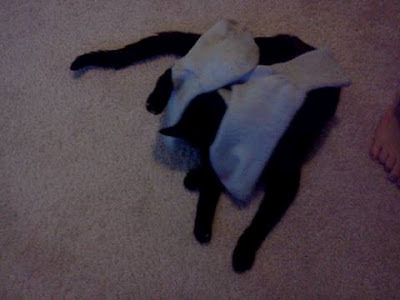 So this is what some adults do for entertainment.  Mom and dad don't go out much (they really need to), so when it comes to having fun they toy with Yours Truly.  As I think I've mentioned before mom has this thing for tossing things at me, and the other night dad gave her the brilliant idea of using me for dirty sock target practice.  He sat back in his chair with the torturous groan of a 100 year old man as mom donned a face mask and protective gear and oh-so-gingerly (she doesn't like touching dad's feet) tugged his stinky socks off, then tossed them, one by one at me as I bathed obsessively in front of them.
Apparently I was so into my hygienic routine that I didn't notice I was covered with toxic material, and by the time I realized what was going on they were laughing so hard mom all but pee'd herself and dad sounded like a walrus with a chronic smoker's cough.

Humans! They get so entertained over the least little thing. Do you need me to call in a hazmat team for you? I could do that.

You know, valerian root smells *just* like stinky feet...maybe your Dad could eBay his socks and make a fortune!

Poor Orbit. It's sad these hoomans of ours don't haf sumthing more constructive to do. Like cleaning and refilling our food and water dishes!