You know, I have limited input in these posts, so you may not always get my point of view.  A lot of what gets put here isn't what I would say, and many of these posts make me out to be a cranky, crusty old fart.  However, I wish you could see how things REALLY are around this place.
Mom and dad treat me like a spoiled brat Royalty.   Though I swear I don't ask for it (insert snicker here) they baby me like it's my last day on the planet.  Dad, especially.  I sense mom trying to be a little more.. assertive, mostly when it comes to my canned food.
She says dad is the guilty party as far as my being spoiled.  I say so what!  Let him have his way.  I know for a fact that mom's trying to trick me.  I'm not stupid, you know.  She won't pay attention to the noise I make when I want my food, and she thinks giving it to me only when I'm not crying for it is getting her way.  Boy, have I got her fooled!
Sure, dad's a big softy, but what mom isn't aware of is the reverse psychology I've got her wrapped up in.  Sure, sure, when she reads this post she'll be all, like, "What?  Really?  Really, orbit?" (that's something she does that dad likes to mimic when they're making fun of each other, which they do often).  If they were half as smart as I am this place would be dangerous.  I've now learned that, when I want to get some of that luscious ground up goo in a can I lounge around on the floor, usually near the kitchen doorway, and pretend to be asleep.
I know that within mere minutes mom will drop what she's doing and sneak past me into the kitchen, where she'll bring the opened can out of the fridge and scoop a dollop of food onto my dish.
I'm also aware that she varies the time that she feeds me.  Dad used to do it every morning about the same time, but mom, in all her smarts, has figured (hah!) that if she doesn't feed me at the same time every day it'll keep me thrown off and guessing. I'm supposed to have learned that I can't get what I want just by begging for it.
Boy is she the dummypants (another of her cutesy names for dad, whether he's around or not).  Ahhh, life is good...

Welcome Back, You Two-Timing Son of a...

Dad just came back from his second annual visit to his first grandson out in the arctic north (okay, central Minnesota, to be exact), and I have to say- I'm more than a little perturbed.
Did he give me lots of cutesy pictures of grandson number one and all the fun things they did together to post here?  Did he show mom and me pictures of the jack-o-lanterns they carved or the fun they had playing at the park?  Nooooooo!
What does he give me to put on here? 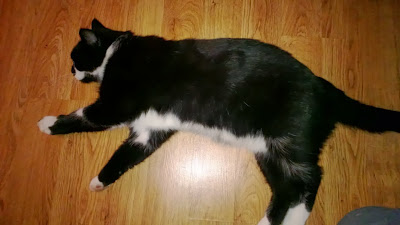 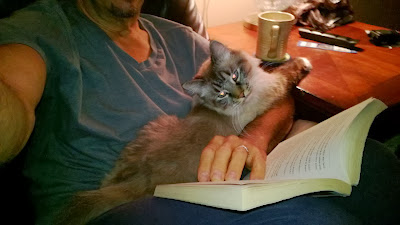 
And as if these weren't enough, he threw in another two. 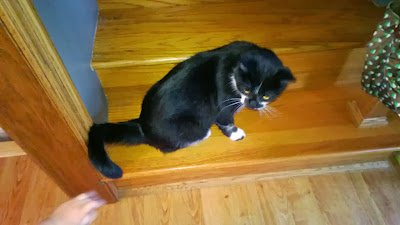 The nerve!  He leaves the warmth of the south and the love of his faithful, longtime companion (oh, and mom, too) 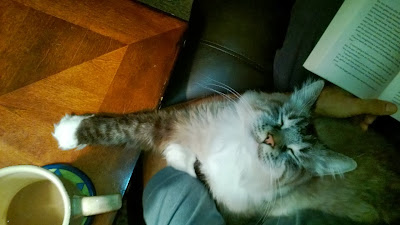 to whore out his lap and attention on these two... creatures!  Awww, look how smug.  Look how nice and comfy and cozy we are on MY dad's lap!   Gee, how cute.  NOT!
I'm going on strike.  I'm not talking to the bastard.  Me and mom are going to ignore him.  Right, mom?  Mom?  Hello?
Looks like I'm on my own here.  Anyway, I'm going to pummel this cretin with my hairball wrath as payback for-- wait a minute, gotta go.  I hear him opening a can of food.  Bye.
Posted by Cleo at 8:39 PM 10 comments: