Well, I suppose I should change the description up there one of these days.  I'm heading toward my second year with this stupid thing, and according to the title my age hasn't advanced since I started.
Since SOMEONE has a problem remembering things no one is absolutely sure of my age.  He's tried to place finding me as a newborn with the job he had at that time, and that's how he came up with my age.
Sure, it'd be easier to just remove it, but I like to do things the difficult way.  And because this is my blog and I can do whatever the hell I want.
It's amazing how someone can be so snotty, yet so cuddly and as loveable as 'lil ole me.
On an unrelated note; they had to clean out my ears again last night.  Now, I know I get a special treat right afterwards, but I'm questioning whether it's worth it.  It makes me so damn uncomfortable, and it's kind of embarrassing that they get some chunks and gobs of shit out of my ears, but I suppose it's necessary.  Whatever.  I hear dad now and then saying that I won't stay mad at them for long since my brain is only the size of a walnut and the memory of the unpleasant experience won't last.  Keep it up, big guy- you think my comment in that other post was a low blow?  Don't forget, we've lived together for a long time.  I know a lot about you....

I'm too damn old to be punished like this!  My paws are sore already.  This sucks.  I'm gonna run away.  I hate you.  I'm gonna poop on you when you're sleeping.  You know who you are.
Posted by Cleo's Dad at 6:12 AM 9 comments:

Mom and dad have been letting me sleep with them again, and I've been trying to be good about not talking too much.  Well, this morning came, and I was behaving myself, but then they started moving around a lot like you humans seem to do, their faces all stuck together and making sloppy noises, when dad suddenly looked over and right into my eyes, all up close and in person.
That's right, I was sitting there like a statue near his pillow, not more than a foot away, watching them.  I can't tell you how relieved I was when they burst out laughing.  I thought for sure I'd be banished from the room again.
Once their laughter subsided they picked up where they'd left off.  No longer wishing to take part in the festivities I hopped over them and went out for my breakfast, knowing that it would only be a matter of minutes before they came out for theirs. 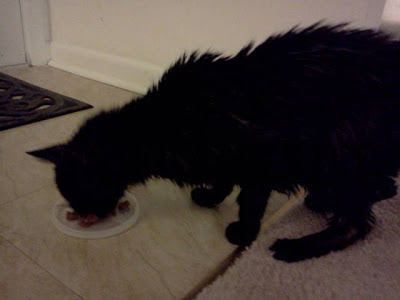 Well, they had to bring me to the dreaded vet yesterday.  That's right, this healthy old body had issues.  I'd been scratching and pawing at my right ear lately, so mom ended up bringing me to the doctor, only to find out my ears were simply dirty. 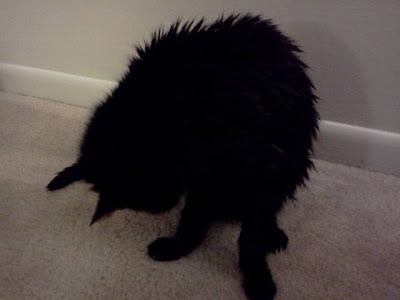 I'll put money on it that if I poked and prodded enough in, oh, say, dad's ears I'd find some dirt.  Hell, there might even be some Fritos, bottle caps, and maybe even some spare change. 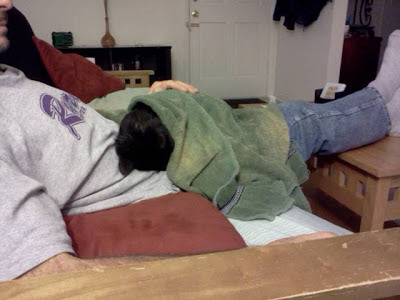 As if all this wasn't bad enough, I couldn't hold my bladder until we got back home, and we didn't quite make it into the apartment before I peed.  That's right- I am not afraid to admit it- I flooded the bottom of my carrier (actually, I did it to get back at them for stuffing me into the damn thing, but don't tell mom).  This lead to a bath, which, they claim, I was overdue for anyway. 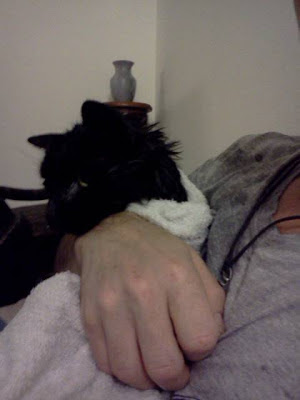 After all this I was at least rewarded with a special treat, after which I spent about a hundred hours washing myself.  I then soaked two different towels during the drying off process, but got some great cuddle time with dad.  I may have been a little evasive towards mom at first, but eventually, before bedtime I did curl up on her lap as well.
I forgive you, mom.  I know you were just trying to take care of me.
Posted by Cleo's Dad at 6:14 AM 11 comments:

Now You See Him, Now You Don't 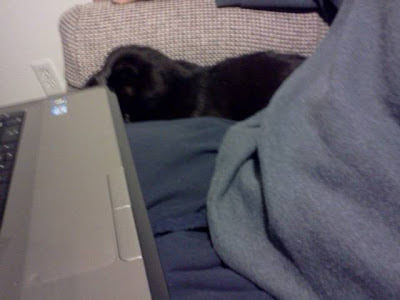 This is a game we play regularly.  Mom and dad both do this, and this time it was dad.  I have to fight every day over this stupid computer, and most often that damn thing wins, as these photos show. 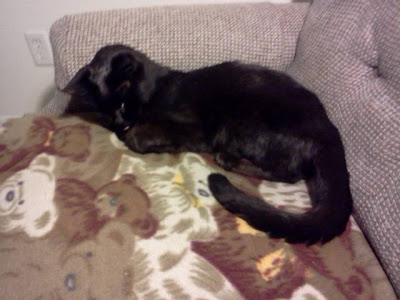 Dad finally got me to settle in, squished between his leg and the arm of the chair.  I won't ever admit it, but it's actually kind of comfortable here.  He got up for something- coffee, dinner, pee- I don't remember (I think his poor memory is rubbing off on me), and since I was asleep I just stayed the way I was.
Most times, however, I take advantage of his absence and stretch across the seat cushion.  This doesn't always work though, and when he comes back I get annoyed when he picks me up or shoves me to the side, thinking I'll let him have his spot back.  Ass.
Posted by Cleo's Dad at 6:18 AM 8 comments: