It's That Time Again

Once again, it's that time of year when mom and dad do a road trip to see some of the kids and grandkids.  They'll be heading out bright and early tomorrow morning and plan to stay with some friends up in Pittsburgh before heading over to Connecticut, Massachusetts and New Hampshire to visit assorted family members.
As usual, it's gonna be a whirlwind trip, with too much to do in too short a time.  Even though dad has lots of vacation time at his disposal his job doesn't go away just because he does.  Mom and dad have lined up some awesome folks to take care of me while they're away.
There's a friendly, cat-loving set of twins who live just a few doors away from us who are gonna come every day to see that my food, water and litterbox needs are met, and after a few preliminary get-to-know-you visits I think I'm comfortable enough with them so mom and dad can relax while they're away and not worry about me being taken care of.
The twins are very sweet and have a couple of felines of their own, and they're more than happy to help with my care.
I think I might miss mom and dad, but I'll be in my own little world here, and I'm sure it won't take me long to adjust to the solitude.  They'll be back the first week of April, and as usual I'm sure the time will fly by way too fast.  That's the way it goes.
Sure, there's Skype, FaceTime and whatnot, but they always enjoy seeing the kids and, especially playing with the rapidly growing up grandkids.
By this time tomorrow mom will have had the car packed, dad will be rushing around as usual (mom says she's never known someone who gets up, as she likes to say "before God" but always seems to be running around like a chicken with his head cut off trying to get ready last minute), and they'll be off for their week of leisure.  Sort of.

Okay, so the tone of that last one might've been a little off.  Even with all his ribbing and being what he- and only he- thinks is funny, I love dad.  And he loves me.  We have our issues, but isn't that normal?
They take care of me, I provide them with a never-ending supply of love and companionship.  They feed me, I allow them to clean up my poop.
You see how it works.  All in all, though he's pretty much a full-time ding dong, dad's a great guy (and he's loving typing this, just so you know).
Mom's the most awesome mom in the world (you owe him one, mom), and the three of us are best friends.
Despite his previously-mentioned mean streak dad really is a loving, grumpy, hilarious, crusty, handsome, annoying, thoughtful, aggravating gentle soul.  Dear me, I think I'm gonna yack from all the cheese interspersed in that sentence.
Anyway, if there ever was any question about my relationship with dad this should show what's what. 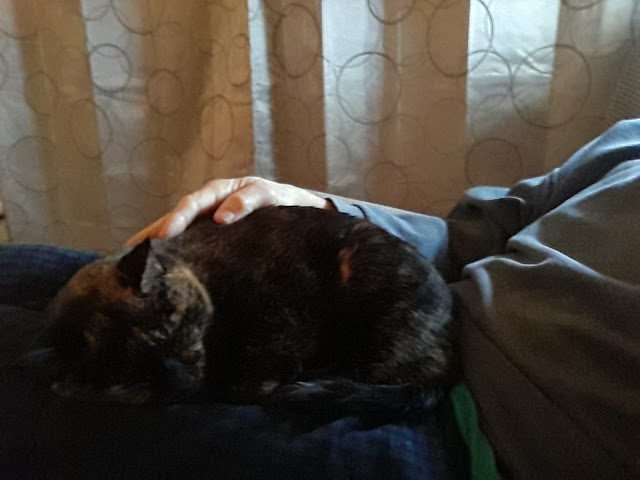 Okay, this is just mean.  I know dad can be cruel (just ask any of his siblings.  Or mom sometimes), but come on, dad.  Really? 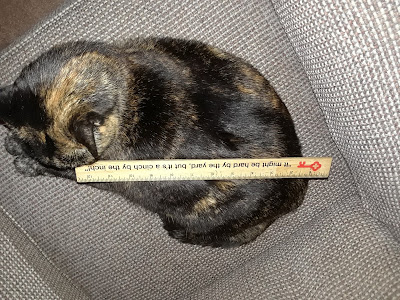 I mean, what are you trying to say, hmm?  I get the jokes about my heft and girth.  I ignore all the well-meant-though-offensive-nonetheless nicknames.  I'm trying to get used to my special diet.  But really?
"Ha ha ha," he chortles.  "Let's put a ruler on the sleeping kitty," he says.  "Aren't I the funny one," he says to himself.  "Let's make fun of her size," he says under mom's stern glare. 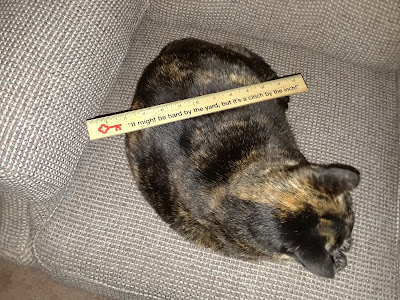 Laugh all you want, big guy.  You're hilarious with your measuring stick.  Remember, I've seen you naked...
Posted by Cleo's Dad at 4:49 AM 16 comments: 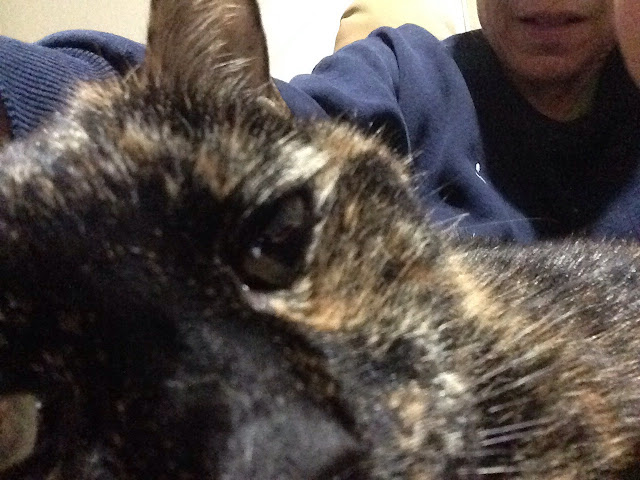 So mom has dad's phone and decides to take a selfie with me.  How's this for an extreme close-up?  Little bit of me, little bit of mom. More me though.  Yup, it's all about me.
Posted by Cleo's Dad at 4:32 AM 16 comments: