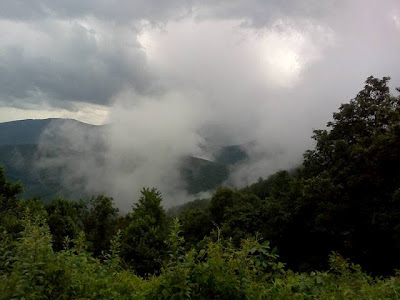 So mom and dad made another one of their spur of the moment decisions this past Friday night and disappeared on me early Saturday morning.  They had always wanted to go out to Asheville, and mom kind of suggested they just get up early and go.  They trekked along portions of the Blue Ridge Parkway, something mom said she's always wanted to see.  The views on bright, sunny days must be fantastic, but the weather wasn't so hot when they got out there, and they got some of the most amazing photos from up on the mountains. 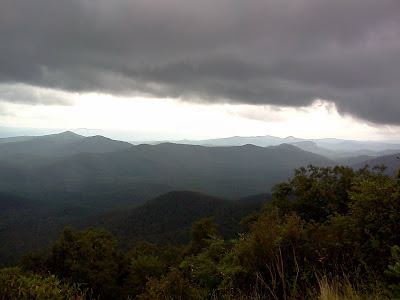 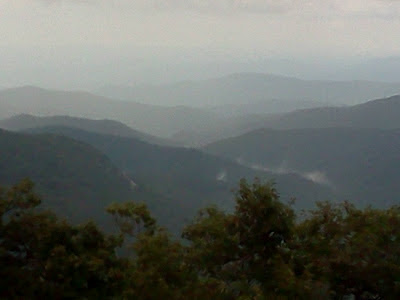 They said the clouds were dark and fast-moving, and they thought they'd entered another world by the time they got to the highest point on the Parkway.  Their trip also included a stop at Chimney Rock State Park, with all kinds of cool hiking trails and way too many steps for your average out-of-shape human being (or at least mom and dad).  I'd put pictures of that place here too, but in his packing haste the Talented Mr. Absentmindedness forgot to grab his phone charger (mom actually did the bulk of the packing, so it wasn't like he had much to do).  His phone has been having battery issues lately and started to die rapidly.  Not wanting to buy a charger he decided to keep the thing off and use it for emergencies only (after he took these, of course, knocking the battery down a few extra notches).  Check out Chimney Rock's website for some amazing photos and to see what Captain 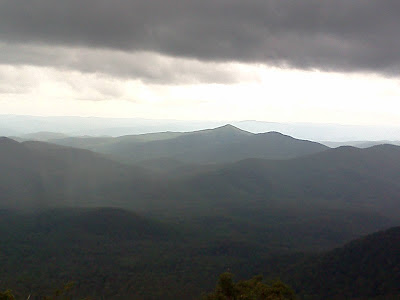 Oh-my-god-I'm-such-an-idiot couldn't show you here.  Way to go, bright one!
They spent Saturday night in a motel that had something called a two-person jetted tub, which was right in the room about six feet from the king-sized bed, and could've actually held three people.  They're not really into that kind of stuff, so they enjoyed the room to stretch out, and the bubbles (from the jets, of course...).  The hiking and the six hour drive back took their toll on these two weary travelers, and once they got back home they could barely stay awake long enough to give me some attention, refill my food and water, pick up one surprise pile of gack, and crawl into bed.

So What, They're Just Clouds 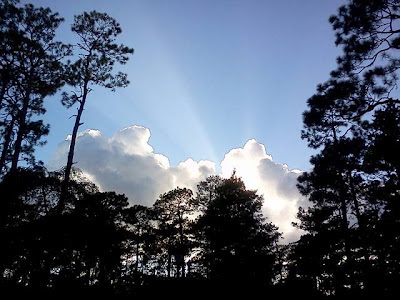 Okay, so here's another one that's not about me.  Mom and dad went to nearby Hugh McCrae Park the other afternoon to walk, 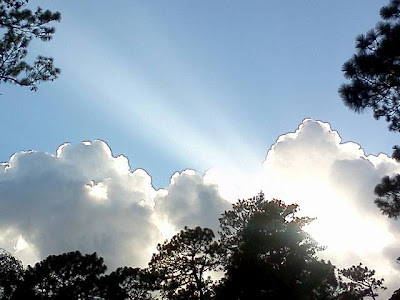 in their ongoing attempt at staying healthy.  Afterwards, they spread out a blanket, ate dinner, and read.  While they were lounging mom told dad to look up, and dad thought the view was awesome enough to snap a few pictures.  To me they're just clouds, something I can see any time I look out the window (though NOT from my nonexistent perch).
Posted by Cleo at 5:59 AM 2 comments:

Okay, so it's been a while.  I'll admit sheepishly that I need dad's help with this thing, and dad has been dealing poorly with one of his addictions for the past week-plus.  He JUST put down the latest book he's been reading, a thick one that took him all week to plod through.
Early morning is the only time we can blog (and the only time he can read), our evenings taken up by dinner, dishes, mom-time, and dozing in front of the t.v., and since the library is so convenient and dad needs a constant fix, well, you know the rest of the story.  I swear, food, books- this guy needs help! 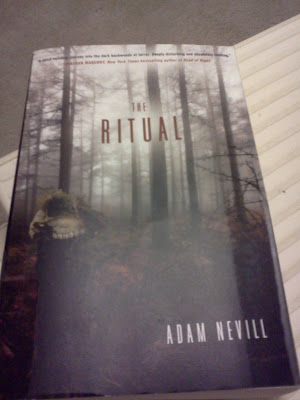 I'm lucky to get this entry in, considering the stack not yet read on the headboard.

This is the one he just finished, and I can tell he's already leaping for the bedroom door to start the next one.  He's got the door closed so mom can sleep.  She needs to catch up since lately I've rekindled the need to exercise my right to free loud speech at all hours of the night.  My latest bout was approximately two hours ago at about 3:50, and I know I got on their nerves.  Oh well.  I'm a nocturnal creature.  How the hell am I supposed to know any better?
Posted by Cleo at 6:18 AM 9 comments:

Happy Independence Day everybody, and Happy Anniversary to me!!!  On this day we celebrate America's independence, and also the anniversary of Peeballs And Pooplogs!!!
That's right. One year ago today I amazingly learned to type and started this blog, sharing all kinds of important stuff that no doubt makes all your lives feel so much more fulfilled, and enriching your every day with piles and piles of worthwhile information (and maybe some exaggerated shit) that I'm sure you just can't live without.
A big thanks to all who've taken the time to read what I have to say, and to those who've posted comments on my blog. I've made lots and lots of new friends, and look forward to making many more.
Celebrate safely and responsibly, and make sure to tip an extra cold one (or two) for me!

Yes, this temporary color change is my attempt at showing my Patriotism.

No, dad didn't build my perch.

Yes, he has an excuse.

No, it's not just because he's lazy (not this time, anyway.  He was busy all weekend with air conditioners that decided they didn't want to work properly).

Yes, he says he'll do it just as soon as he can.

No, I don't believe him.