Every true cat-lover likes to think theirs is the most amazing animal on the planet.  We are no different.  Right now, Orbit is asleep next to my wife, paws curled under him and his head against her pillow.  Every day he becomes more and more like a little person.
During the night he woke us up, as he so often does, with his annoying cute talking.  And I don't mean quiet, from a distance, meowing.  He gets right up between us and lets us know that he wants attention, knowing fully well totally unaware of what time it is.
Occasionally his... quirks can be a little annoying, but at the end of each day as we retire to the bedroom and lay our heads on our pillows, knowing that within moments he'll be jumping up to seek out his favorite spot, we are so thankful for having such a loving creature in our life. I'm sure he'd say the feeling's mutual, or at least I'd like to think he'd say that. 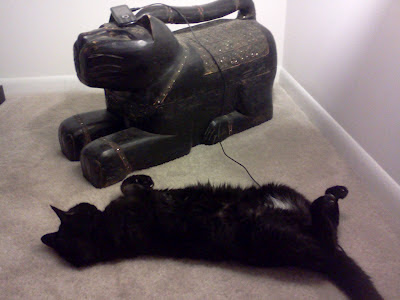 Well, I'm not quite sure how to explain this one.  As most of you know, I like to nap, and since the arrival of the warmer weather, I've taken to sprawling out on the floor wherever I see fit.  For a couple of crusty old guys we sure do make for an interesting photo, wouldn't you say?
That's mom's cellphone on the sarcophagus's head, and no, the charger cord is not plugged into my butt!
Posted by Cleo's Dad at 5:59 AM 5 comments: 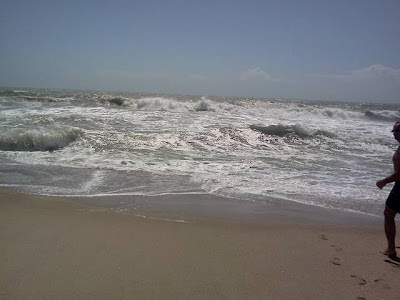 Mom and dad went off to the beach again yesterday.  Unfortunately for them, the conditions there didn't allow for 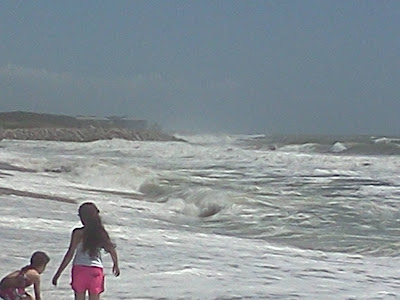 much fun to be had.  Although the photos don't adequately show it, the surf was extremely rough to the point of "No Swimming" 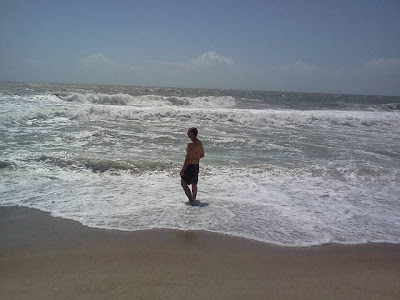 signs having to be posted, and the wind blew the sand so hard that it stung.  I guess there's a storm offshore or something, which caused these conditions.
They stayed at the beach for an hour or two, then returned to wash the dumptruck loads of sand out of their hair, ears and other, more unmentionable parts.  Where dad is standing in the bottom picture is about as far as he was allowed to go, and he said even the water rolling over his ankles was enough to knock him off-balance at times.
Posted by Cleo's Dad at 7:16 AM 8 comments: 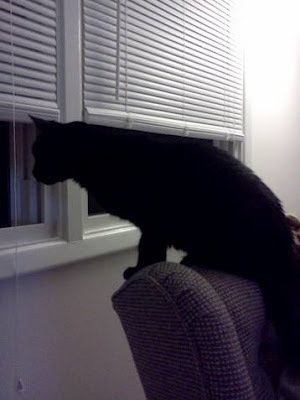 Have I mentioned how much I love that we're on the second floor?  Our windows have been open now pretty much since we moved in, and I'm still waiting for old Mr. Handyman to build me some kind of ledge so that I can sit in the windows more comfort- 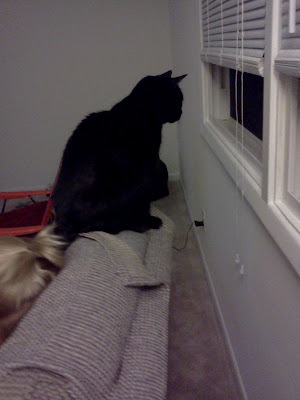 ably.  For now the only place I have is up on the back of mom's rocker.
When she's sitting in it I can hop right up on one of the arms and then up to the back of the head rest.  There I'll sit, staring intently out the window, my tail swinging back and forth in mom's face.
When it's empty, however, (there's a joke in here somewhere about mom being off her rocker, but I can't quite put it together) I'll jump up onto the empty seat, and when I get to the top the chair rocks and wobbles from my weight.  My balance, even at my advanced age, is amazing though.  Dad, ever the procrastinator keeps promising to build me something.  I only hope he does it while I'm still around to enjoy it.  For now I'll just have to make do with the chair.  Maybe mom will get sick of my tail in her face and my butt in her hair and light a fire under dad's butt.
Posted by Cleo's Dad at 6:09 AM 8 comments:


Whether being scolded or called to for some lap warming I pretty much only hear mom and dad when I want to.  When I try to climb on their lap while they're eating they say "Orbit, no!", but I only hear "        ".
When they want me to sit in their lap and I'm across the room they call me with whistles and words, but what I hear is "         ".
Now and then when I toss up a hair ball I know it pisses them off, but what the hell, I'm a cat. The tone of their voices rises, they spout their words, but again, "       " is all I hear.  I love toying with them, too.  I walk toward them in their chairs, sometimes circling them and looking upward lovingly, then, just as they move whatever they're holding or pat their laps I turn and saunter away with my butt saying "Thanks, but I'm not interested."
My butt doesn't actually talk, but you know what I mean.  Well, sometimes it... oh, nevermind.


Mom says dad also employs this sometimes-useful tool, but I don't think he'd want me to share that right now.
Posted by Cleo's Dad at 6:28 AM 8 comments: 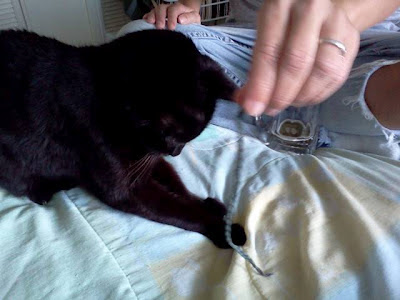 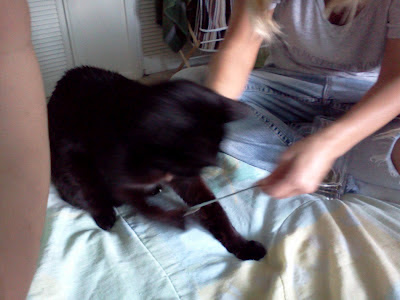 Apparently I still have some youthfulness in me.  Mom took out a braided bracelet she'd made dad a while ago and started swishing it in front of me.  Well, I couldn't resist, and almost immediately started swatting at it.  I swung, swiped, batted and bopped, to their great amusement.  Even I was amazed that such a little thing could bring about such immense pleasure.  Check out that great blurred action shot of me and mom locked in a game of tug-of-war!  Not long after dad got these pictures I grew bored, as I usually do, and wandered over to the edge of the bed, plunking myself down in slow motion with my back to the two of them.
Posted by Cleo's Dad at 6:31 AM 10 comments:

So mister smarty pants sent off one of his short stories to a writing competition and guess what?  He didn't win.  Nothing.  Not even a spot on the finalist list.  He toiled over his little tale, cleaned it up (with mom's help, of course), gave it one final spit-shine, then submitted it.
He waited anxiously for the results.  He paced all hours of the night, rambling incessantly, causing mom to tear her hair out (not really).  He nervously chewed his nails raw, the bloody stumps just now starting to scab over (okay, maybe a little bit of an exaggeration).  Finally, the judging day came, and with it the email dad feared he'd receive. "We appreciate your blah, blah, blah.....  Unfortunately blah, blah, blah....  Please try again in the blah, blah, blah...
It's okay, big guy.  There's always the next one.  Get over it.

And Then... Nothing Happened

So the other day I woke from a deep, deep sleep in my most recent favorite spot under the bed, went into a massive stretch, then crawled out into the daylight to find that nothing had happened.  I walked over to my food and water dishes, as I always do, and there was nothing different, nothing exciting happening.
Sometimes, something will happen- I'll hear a noise, smell something interesting, catch movement out of the corner of my eye.  Occasionally mom will be doing something that grabs my attention.  I didn't climb up on the back of the rocker to see anything out the front window.  I didn't peer around any corners, poke into any closets, or check out the backside of the tv, toilet, or waste basket.
There were no bugs scurrying across the carpet, no birds singing outside, no string hanging from anywhere for me to play with.  Nothing.  It was as if I fell asleep here on Earth and awoke on planet Boring.  After accepting the fact that absolutely nothing was happening worth writing about, I returned to my spot under the bed and went right back to sleep, hoping that when I woke again there would be a vicious thunderstorm, complete with jagged bolts of lightening dancing right outside the windows, ominous gray-green swirling clouds and a crescendo of eerie violin music, big, scary monsters would be tearing the front door off its hinges, mom and dad would be jello wrestling in the bathtub, dressed in each others' clothes, the furniture would be circling the living room, mid-air, or something.  Anything.  Oh well.  Goodnight.
Posted by Cleo's Dad at 6:30 AM 3 comments: