A mom who keeps my fur shiny and clean, my nails neatly trimmed, and my eye boogers at bay

A dad who has provided me, for the most part, a lifetime of love and companionship, a roof over my head, and a warm place to sleep every night

A set of parents who love me unconditionally, even though I'm quite set in my ways and have some really, really annoying habits (We're not all that different, are we, mom and dad?)

Free reign over our home, with the exception this past year or so (off and on) of the bedroom (because of my noise, apparently)

The ability to wake up every day and draw a breath, letting these two know I'm still alive

The gift of selective hearing and, sometimes, selective seeing

The distinctive title of "Most Photographed Feline in the Western Hemisphere"

The ability to provide hours and hours of entertainment, wonderment and laughter to a full time audience of two

These are the things I'm thankful for on this Thanksgiving Day.  I know there's more, but this is all I can think of right now.  It's early.  I'm not awake yet.  Leave me alone. 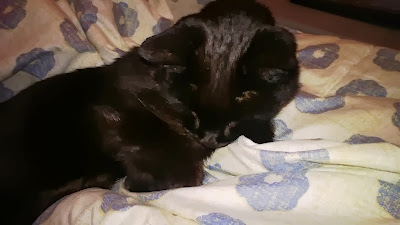 Yesterday was my idea of a perfect day.  After doing some initial chores mom, dad and I spent the 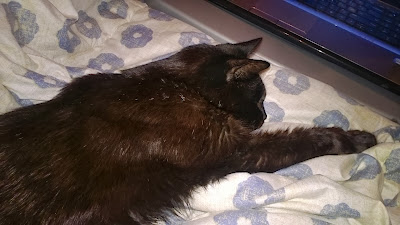 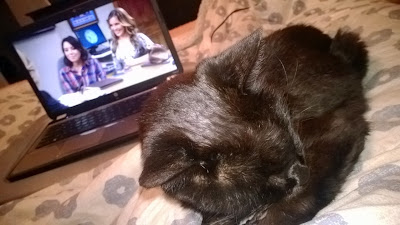 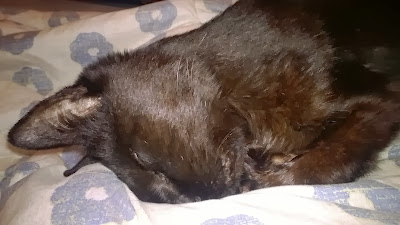 remainder of the day lounging.  Dad hurt his back last week, and mom's been busting her butt keeping things running smoothly, so they decided to take it easy for the afternoon.
Mom filled her favorite 10 gallon vat with Diet Coke while dad spent about an eternity trying to find a comfortable position, then we all piled onto the bed, with me sandwiched between the two of them.  We caught up on some Parks and Rec, Criminal Minds, and even some old episodes of Twilight Zone on Hulu.  All in all it was a perfect day, I'd say.  They tried to get me to cook them dinner, but by early evening I was pretty much out of it, as you can see.

Hallowaitaminute, What The Hell Are You Supposed To Be

It's that time of year again.  Time for the Dress-Like-an-Idiot-and-Make-an-Ass-of-Yourself work party.  Dad kind of has to go, since his job sort of requires it, and mom doesn't mind going along, even helping out.  They're not really the social type, but hey, free food and a chance to see others cross dressing or making themselves up like ghouls, zombies, wizards and animals sounds like great fun, doesn't it?  Yes?  Hello?  And don't get me going on the creepy Stormtrooper guy...

So begins what was originally going to be my next post.  Jeez, I didn't realize how long it'd been since my last one.  Anyway, let it go, you old ass.  The party was a great success.  It's primarily for the kids anyway, and they all had fun.  Seems someone gets crankier and party-poopier every year! (I'm thinking mom will agree with me here)
Party aside it's been S.S.D.D. around here.  Temps have dropped a few degrees overall, mom's doing her heavy duty fall cleaning, and I got another bath, which I don't mind admitting is getting easier to tolerate.
While out and about this past weekend mom and dad stopped at Petco and Petsmart.  Both places were having adoption events, and mom and dad were saddened by the dozens and dozens of cats and dogs hoping to find forever homes.
Well, that's about all I got for now.  Bye.