Greetings all.  Yeah, yeah yeah, it's been a while.  Sorry.  Whatever.  I've been blocked/distracted/busy- take your pick.  Maybe SOMEONE'S just had no imagination lately... 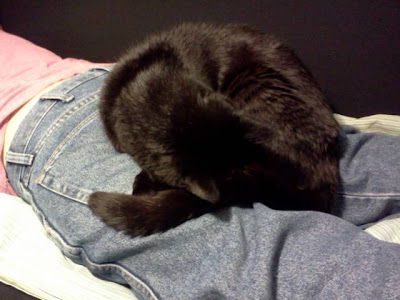 Anyway, dad sat in mom's chair last night and I tried to show him some love by taking advantage of his warm lap.  Well, as it turns out he also had the laptop with him, so I turned and showed him my sparkling white a-...  I mean I turned my back on him and headed for mom, who was lounging on the futon, watching tv. 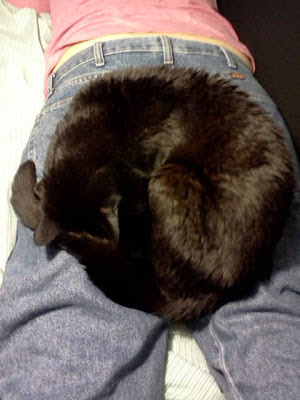 Mom's butt seemed to be the most comfortable place to nap, so that's where I curled up for my evening's rest, and that's where I stayed for the duration of their nightly dose of brain rot.
On a completely unrelated note that I probably shouldn't share dad thinks it's hot that mom's wearing his jeans.  I think he's kind of a freak.

Pass The Gas... And The Blame

Okay , so I was just wondering- am I the only one who has to deal with this crap?  I've accepted that I'm the entertainment in our household, but I'm tired of being blamed for their gastrointestinal distress.  Everyone farts, myself included, but why must I always get the blame?
Once in a while I'm not ashamed to admit to being the creator of the noise... and smell.  I'm serious- I just continue walking in whatever direction it was I was heading.  Maybe, just maybe I'll pause, look around as if thinking hey, what was THAT?  Most times I just pretend I don't hear or smell anything.
Enough is enough, I say.  The other day was the final straw.  Get this now, you two;  If it's loud, it's not the cat. Everyone knows that a cat's fart is simply a barely audible hiss of air.  Well, usually.  My point is, it isn't always ME!
You two want to blame each other and then laugh, fine, but leave me out of this childish game!
Posted by Cleo at 6:27 AM 6 comments:

Mr Pissy here.  I'm in a foul mood again.  Mom woke up waaay too early and couldn't sleep, so she invaded my space came out into the living room to watch some tv in MY chair and I was in no mood to share.
Eventually the big dope came out for his caffeine infusion and joined the festivities.  You see, I'm not on very good terms with him at the moment- he really pissed me off the other morning.  I was doing my thing, walking around, talking as loud as I damn well please, not knowing what I wanted, and it apparently annoyed him, so he yelled at me and took a swipe just a little too close to my ear with the damn book he was reading.
I scurried off to hide under the coffee table, and our relationship is still a little strained.  Dad's right, what I hear him saying often- people can suck!    (Only this time it applies to you, big guy)