Hoo boy, talk about a whirlwind couple of weeks!  I enjoyed meeting and visiting with dad's son and chief furtive Cheez-It provider (probably what I'll miss most about him!), but let's just say I'm loving the return to quiet normalcy and routine. 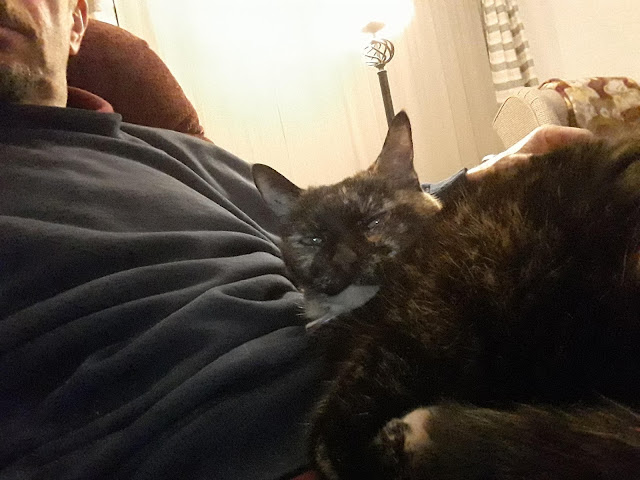 Luray Caverns ended up being everything they'd hoped it would be and then some.  Mom loved it and dad's son was genuinely surprised and excited.  Oh, and mom & dad wanted to say a heartfelt thanks to all y'all for your well wishes and kind words for their anniversary.  Here's to the next ten!
Posted by Cleo's Dad at 5:55 AM 19 comments:

A Week Full of Hiking, and Then Some

So this is where mom, dad & dad's son hiked throughout the week.  I've gotta say- I'm exhausted just looking at this list.  They did some shorter, easier ones at first, and the week culminated with the ultimate hike (for them, anyway) from one end of Grandfather Mountain to the other, an often-vigorous trek through some occasionally frightful terrain (for dad, anyway).

I'm not sure about that since I don't do hiking, but dad says he nearly needed a change of pants a couple of times.
Dad decided in lieu of tons of photos he'd just post links since there are so many photos and lots of information online if you're interested, though he did want to put up a few he really liked (plus he wanted to prove they really were there). Light rain had been expected for that afternoon, but there were snow flurries at the top of the mountain, adding to how much dad was already quaking in his hikers.
The Blue Ridge Parkway is a beautiful ride if you ever get the chance to drive any of it, and they wanted to show dad's son all the tunnels and amazing views from lots of parts from Grandfather Mountain down to Graveyard Fields, including the Linn Cove Viaduct, an awesome feat of engineering.
On one of the warmer days dad's son even took the plunge down Sliding Rock, though mom and dad took a pass, saying they'll wait until the water's warmer this summer.Rainbow Falls in the Pisgah National Forest was another highlight, offering gorgeous views of the rainbow from almost any angle in front of the falls.  Dad's son ended up staying through this past week as well and helped out with some of dad's chores at work.  They hit the road this weekend to bring him back home, and surprised him with a visit to Luray Caverns up in Virginia.  Mom's always wanted to see the caverns as well, and she said they're absolutely beautiful.  Finally, I wanted to be in this, so here you go:


Dad and I apologize if the links don't work.  Blogger's being a booger, and the font stuff isn't working right & the links work one time and not the next.

On a final unrelated note, mom and dad just celebrated their 10th wedding anniversary (they've been together for 15 years!  I'm not sure how they did it), and they just got the first of their COVID shots, too.
Posted by Cleo's Dad at 5:35 AM 30 comments:

Just a quick one while dad's in the midst of trying to keep track of their hikes for our next post. He's up extra early getting ready for a chilly hike up Grandfather Mountain today.
At the risk of offending anyone I thought this was kind of funny. 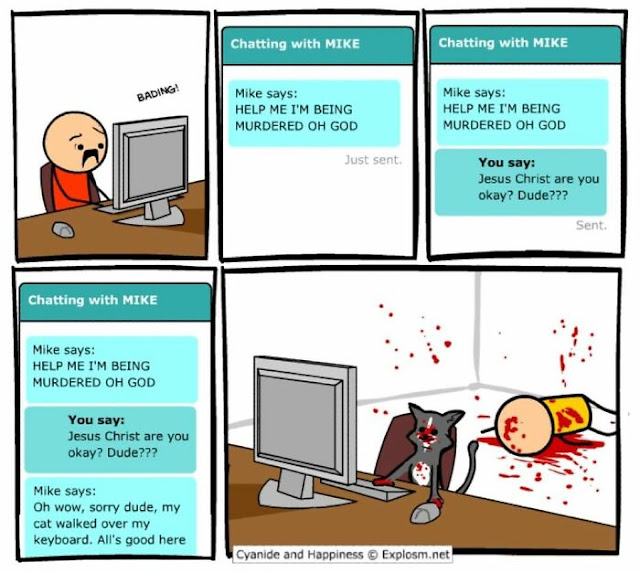 Looks like I better start thinking about changing my nocturnal noise habits so dad gets more sleep maybe.  Mmm, nah...
Posted by Cleo's Dad at 5:34 AM 23 comments:

Hey y'all.  Dad and I are gonna take a brief blogger high-ate-us.  We're enjoying a welcome visit from dad's youngest son and they're planning on stuffing lots of activities into a short time.  They haven't seen each other in a few years so there's lots of catching up to do.  Mom and dad drove up north to pick up his son waaaay up in Pennsylvania and just got in last night.  Almost as soon as our visitor opened his suitcase I was right there to check it out. 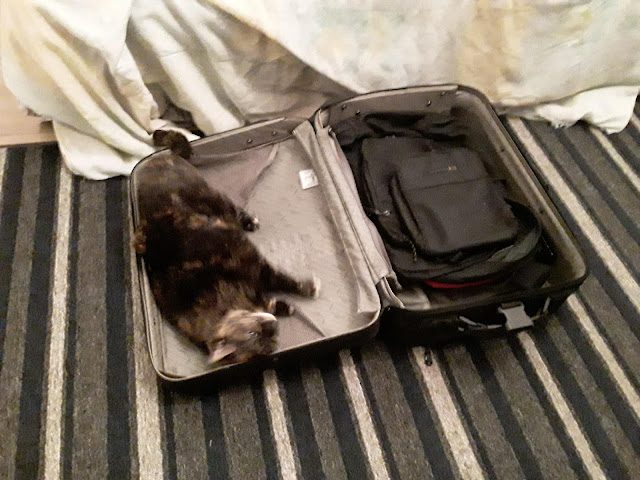 The photo is out of focus because I wouldn't sit still, rolling around in it, sniffing every surface (the suitcase lives with a pup) and just being all gosh darn adorable.  This morning dad's body wanted to get up effing early as usual, but his head was fighting it, so he sat in bed reading and sipping his java while mom pretended to read (I think she was snoring) and I dozed on dad's lap. 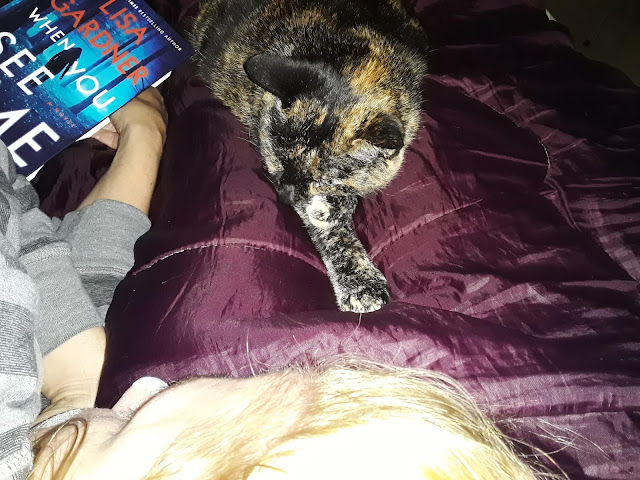 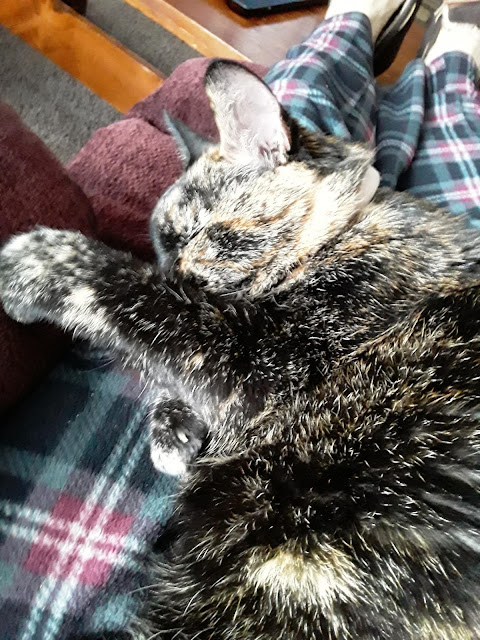 Considering it's in our nature to sleep a good 12 hours a day or more, the majority of photos dad has in his "Cleo" folder are of me slumbering away on one lap or the other. 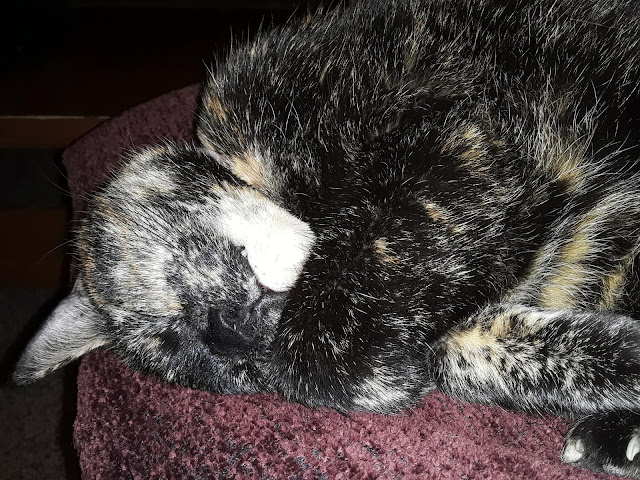 Sometimes on the living room carpet, once in a while on their bed and occasionally out on the steps I'll curl up for a good long snooze, but mostly it's their laps.  He says for a big ol' girl with attitude galore, a dislike for being held and the need- recently, especially for some reason- to wake him and mom at all hours of the night for no other reason than wanting attention they can't help but look at me like this and just go "Awwww...". 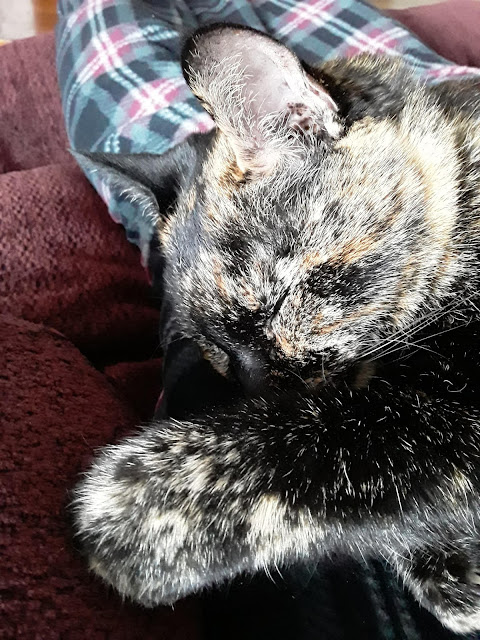 I know dad and I have posted pictures several times of me and my thing with tissue and paper and stuff, but dad seems to get no end of enjoyment out of it. 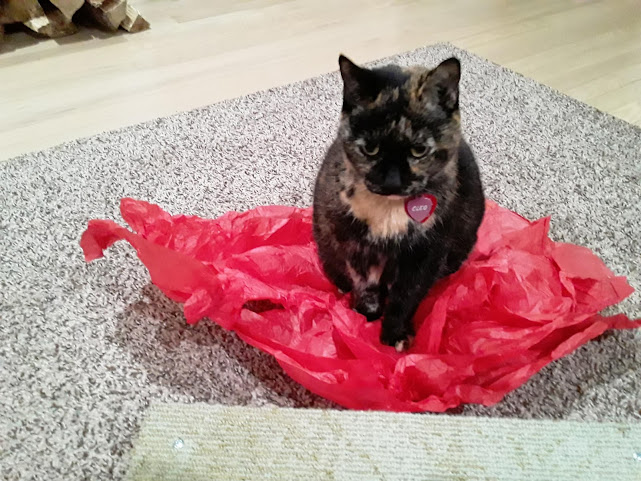 Plus he's trying to clean out his "Cleo" folder to make room for more recent photos of yours truly. 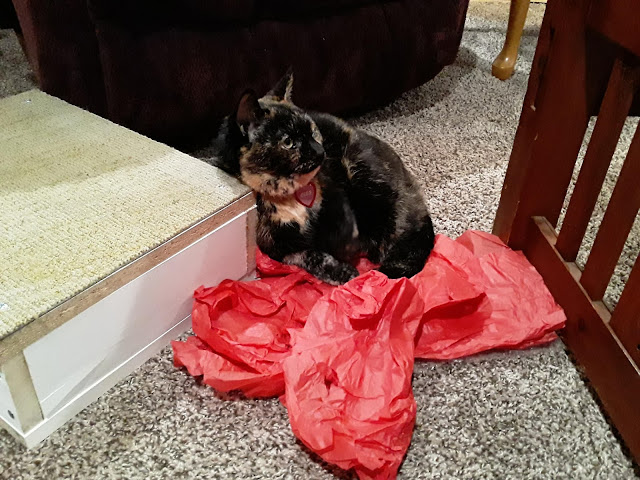 These were from this past Christmas, when dad's oldest daughter sent us a package that was stuffed with red tissue paper. 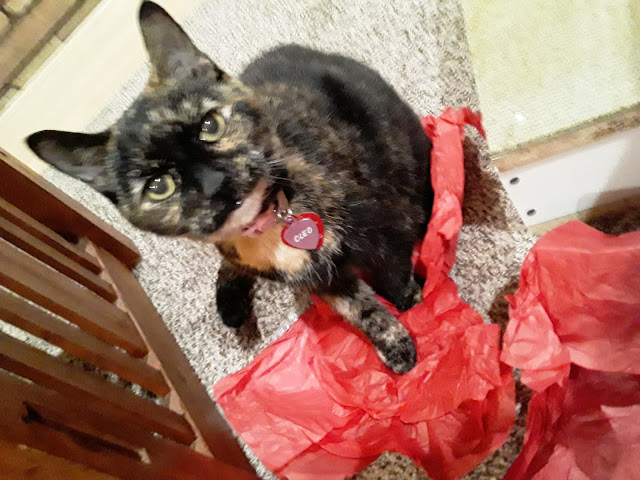