So lately I seem to be having some issues regarding my gastrointestinal system (my poop is hard and doesn't always want to come out).
Dad did some research, and learned that among many other natural remedies cats are supposedly attracted to pumpkin. Mom went out yesterday and picked up a can, and they tried to get me to eat it.
I took one whiff and walked away.  At my age I'm not much of one to try new things.  Mom also brought home a small can of moist me-food for those "special" times when I deserve a treat (ear cleaning, eye-booger cleaning, vets visit, etc.).
After I turned up my nose at the straight pumpkin I watched as mom mixed a small plop of it in with some of the wet food, and I'll have to say- it was actually pretty appetizing.
I'm a little uncomfortable with my pooping habits being discussed publicly, but they said they're going to watch to see if this helps.  Actually, dad gets to be the official "Turd Observer".
Dad made some of mom's delicious homemade whole wheat pancakes for dinner last night, and he decided to try some of the pumpkin in his half of the batter, along with a few raisins.  Mom didn't much care for them, but dad loved them, and since he's been trying to do without sugar these days the bath of pure Vermont maple syrup he gave his pancakes sent him spiraling into a sugar stupor.
Mom has to monitor the flow of that stuff, and she thought dad might have had his shit under control.  All she could do was shake her head as she watched him lick the syrup dripping from the rim of the ginormous jug they brought back from their trip to New England.

Mom And Dad Have A Fun Night Out 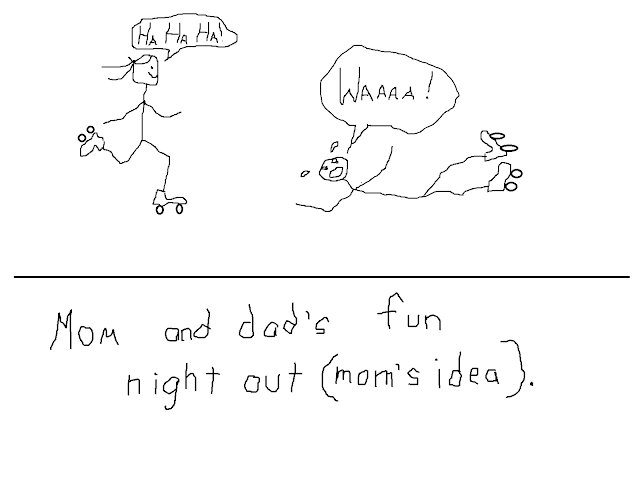 No explanation necessary.  As usual, the idea was fully mom's, since dad's kind of a fuddy duddy when it comes to entertaining themselves.
Mom thinks I make her out to be too mean sometimes, but she did have a good laugh when dad fell.  Once.  Or twice. Or....  I think she did ask if he was alright at some point, in all fairness.
I apologize for the crude stick figure drawing, but I am a cat, dammit.  What the hell do you expect?
Posted by Cleo's Dad at 6:39 AM 9 comments:

On Mothers and Sun

Well, things have finally brightened up around here.  Mom and dad actually got to the beach yesterday, and their moods have lifted dramatically.  For months they've been shells of themselves, going through the motions of daily life, puttering around the apartment like zombies on auto pilot.
Okay, so maybe that's a little dramatic.  I'll try to tone it down.  They spent yesterday at the beach for the first time since forever, it seems.  Mom actually got a couple of days in the sun at the park this past week, but they spent the better part of yesterday at the beach, even though the morning started out a little overcast.
For all her... mothering about dad not using sunscreen a certain someone got herself a little rosy glow just below her butt cheeks (dad made me put that in here).  Now, dad would ordinarily insert a photo here, but apparently we're not going to do that today.
Oh, I almost forgot- Happy Mother's Day to all you mothers.  I'll have to remind mom and dad to call theirs.  If I knew my birth mom I'd give her a ring.  Dad must have several because I occasionally hear him referring to some people as mother-something-or-others.
I guess they're thinking about the beach again today, but right now I think it's drizzling out.  If they've got such a jones for the beach and the weather doesn't work out maybe I'll suggest lounging in my litter box (after they scoop it, of course) under a really bright lamp.
Now there's a picture worth a thousand words... 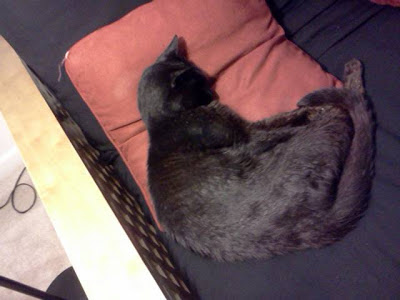 Nobody's spoiled here, nosirree.  Just never you mind that!
Don't even let me hear a "Since when do cats need pillows?"
If humans can use them, so can we, is what I say. 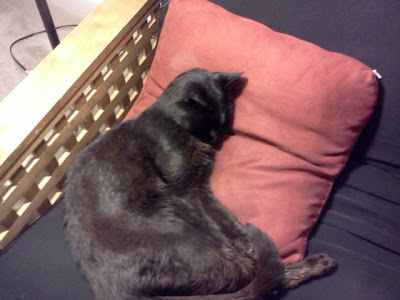 Not to keep going off on it, but I think I deserve at least this kind of treatment at my age.


Not long after dad stuck his camera in my face for this shot I heard the water running in the tub.  Apparently mom wanted to take a bath, but I had to go check it out for myself.
As much as I can't stand the mere mention of the word " bath" my curiosity got the best of me.  Mom and dad were both shocked to see that I even had the balls (even though I really don't have any) to climb up here.  This wasn't staged.  Really.  Mom had the step stool there for her tea.  I stayed long enough for dad to get a picture, then jumped down before they could think about tossing me in there. 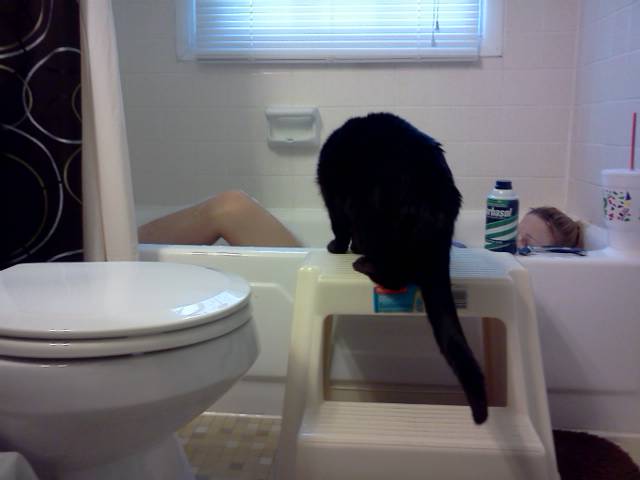 I'd pay a handsome sum to watch you people bathe the way we cats do.  Uh oh, dad's looking at me funny.  Did I say something wrong?  Did I share too much?  Gotta run.
Posted by Cleo's Dad at 6:46 PM 8 comments: