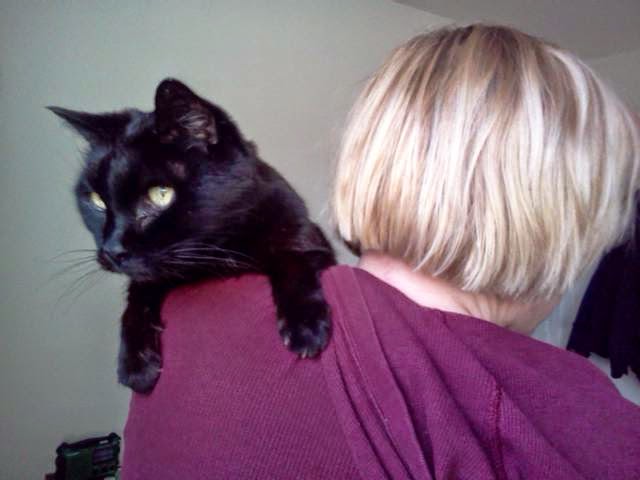 I've more than likely already used this photo in a post.  I'm just too lazy to look back over Orbit's entire blog to check, though.
Of the gazillion photos we have of the little old guy I think we probably have dozens of him on our shoulders, a place he'd always loved to be.
This picture is one of my all-time favorites.  I'm not sure why, but I just love Orbit's expression.  If we look close enough the backs of some of our shirts still contain the tiny holes from his claws as he hung onto our shoulders.
Posted by Cleo's Dad at 6:45 AM 7 comments: 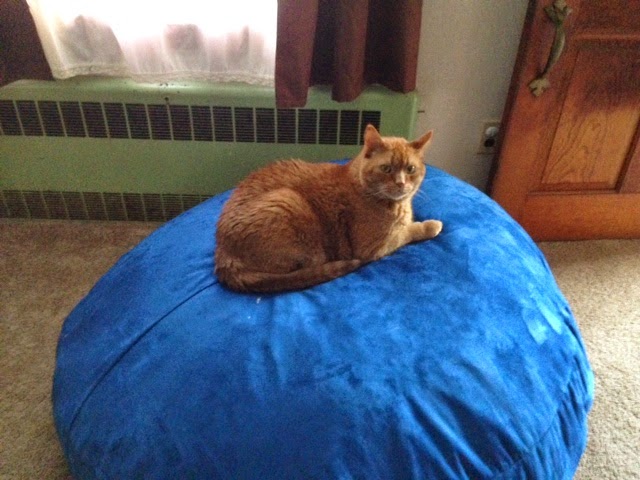 My visit with family was, overall, too short.  As usual, it included some unwanted drama, a fair amount of running around, 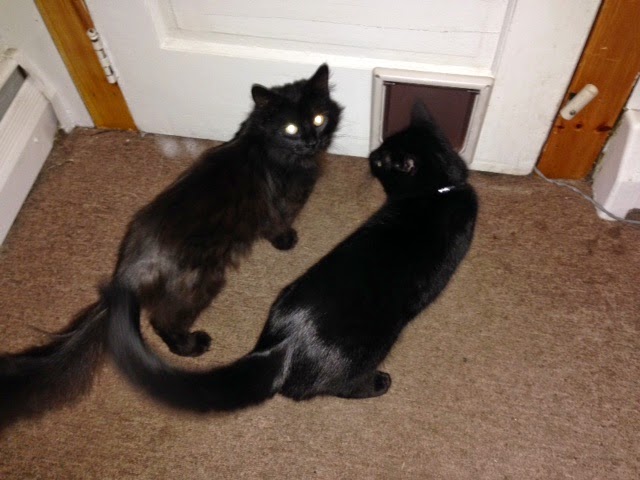 and one missed flight due to a failed rechargeable battery on the plane.  Besides seeing some of my children and playing with my beautiful granddaughter one of the joys of the trip was having feline friends along every step of the way.  The top photo is of my daughter's gigantic ball of laid back cattitude, Brutus, who must weigh in at around 40 pounds.  Though this picture doesn't really show it Brutus is one massive mancat.
The sleek beauties in the bottom photo are sisters, who belong to my son.  Sadie, the short-haired one one the right, is one of the most loving, cuddly girls you'll ever find.
The night I stayed there she slept with me, and woke me up almost every hour, it seemed, crawling over my head, laying across my neck, and gently nudging my face and hands with her nose, seeking attention.
Although I failed to get any pictures I also spent one night with one of my brothers, who is the proud servant of a gorgeous charcoal-hued princess.
As if I needed any prodding, being around these critters has made me want to find another  furry friend more than ever.

It took a while, but recently my wife and I stopped by one of the local pet stores where Adopt An Angel hosts adoption fairs.
Sometimes it's sad to see so many cats and dogs hoping to find forever homes, and it took everything I had to walk away empty-handed.  We visited every cage, every pen, and I took a few out of their cages to pet and hold.
So many purrs and meows, so many sad little sets of eyes.  And then there are the few who simply could not be bothered with visitors, oblivious to the kissy sounds and whistles, lounging, droopy-eyed in their apparently comfortable litter boxes.
I'm about to fly up north to visit family and see my first granddaughter for only the second time.  She's expecting a sibling in August (my fourth grandchild!), and I can't wait to see everyone.
Originally we told ourselves we'd wait for a while before even thinking about another pet.  This trip, some questions about my work, and several other events, some of which have come and gone would determine if and when.
With so much tentativeness I'm now working up the nerve to suggest we consider fostering, but that conversation might not happen just yet.  We'll see.
Posted by Cleo's Dad at 6:38 AM 13 comments: