The other night mom and dad were lounging in bed, reading.  Mom hadn't been feeling well, so dad made her a piece of toast to try to help settle her stomach.
Now, as it is, mom compares dad's and Cleo's nutritional "needs", and that's a term that mom uses quite loosely.  You see, both Cleo and dad have similar eating issues.  It's like that's what they live for.
Anyway, Cleo thinks she's pretty sly.  This happens often while mom and dad are sitting in the living room eating dinner.  It always appears Cleo is feeling affectionate and wants to be near mom and dad, but they know that it's not out of wanting to be near them.  It's their food she's trying to get closer to.
Mom was nibbling her toast and had the plate sitting on top of a book on the bed.  Cleo, of course, jumped up and stealthily (she always think mom and dad don't notice) shuffled closer and closer to the toast.
As much as they'd like to share they know they need to be mindful of Cleo's intake. Mom ate all but the last little piece of toast, and Cleo curled right up next to the plate to keep her eye on it.  You know, just in case mom didn't feel like finishing it.
Posted by Cleo at 5:15 AM 19 comments:

Well someone just turned 56.  And he calls me old?  Even mom, a buoyant 12-ish years younger than dad, pokes fun at him.  Often.  Of course she's got her things that he can poke fun at, too.  Dad says we'll just leave it at that.
Dad had last week off from work, a much needed vacation that allowed me tons of unexpected lap time with both mom and dad.  This time around they decided to keep it close, inexpensive and stress-free. They slept in (yes, it was difficult, but dad actually managed to sleep past 5:00 a few times!), went for walks and took in a fall festival in downtown Chapel Hill.  They enjoyed a tasty lunch and sipped a couple or three or four- who's counting- craft brews at Top of the Hill Restaurant, Brewery & Distillery (don't worry, they walked), visited an art museum and strolled around the UNC campus, took in a movie and did their usual errands.
All in all it was a nice relaxing week and a wonderful week-long birthday celebration for dad.  I think I got spoiled having dad home so much, and I think it gave us a nice chance to bond a little.  I have to split my time between their laps so they don't get jealous, but I think I'll always favor mom's (no offense, pops).  Dad's almost always in shorts, and mom is most often wearing pants and, even on warmer days (and to dad's continued bewilderment) usually has the fleece on her lap.  Do I have her trained or what?

So anyway, Happy Birthday fellow old fart.  I'll miss your lap, but I suppose it makes me look forward to your coming home at the end of the day.  I guess.  Whatever.
Posted by Cleo at 5:14 AM 18 comments:

So at first we thought it was hilarious the way Cleo pounced, pawed at and rubbed her face with these fabric softener dryer
sheets we keep on the floor of our bedroom closet (which ordinarily stays closed). 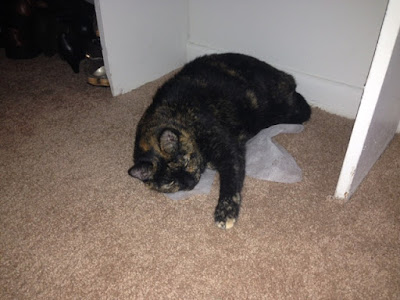 After witnessing Cleo acting as though these things were treated with catnip I decided to research what was actually in them.  Now I feel horrible for not looking into this sooner, though she was only able to get to them when we opened the door, and only if she was interested (something she can turn on and off like a light switch). 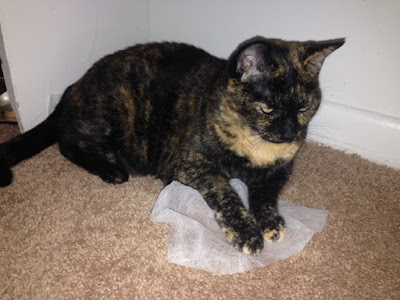 Had I done my homework and realized the potential harm these sheets can cause we never would've let Cleo play with them.
After reading about the dangers of pets playing with these, and in some cases actually eating them, we no longer leave them on the floor.
Posted by Cleo at 6:01 AM 13 comments: