Hike, fog, blah, blah, blah.  Guest post, whatever, whatever, whatever.  Back to me now.  First off, big props to Ann from Zoolatry for my fabulous new header photo with my ginormous catnip plant.  That sucker, as if to say "So There!", has sprouted beyond all expectations since being mowed down.  So anyway, we all have unique sleeping positions, right?  Dad apparently thought it was funny the way I'd fallen asleep on mom recently.  I was simply sitting half upright, just chillin', when the urge to doze snuck up on me. 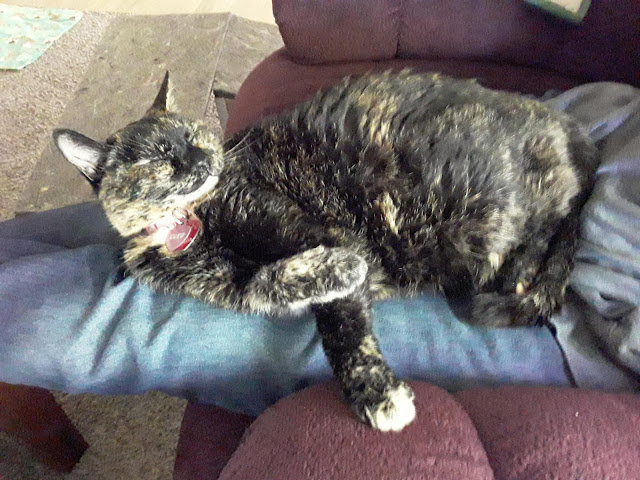 I don't really see what all the fuss was about, but whatever floats your boat, dad.I guess I stayed like that for a few minutes, blissfully unaware of my blissfully simple-minded, easily entertained dad person human thingy..
Posted by Cleo's Dad at 10:25 AM 20 comments:

Settle In, Grab a Coffee & Put Your Feet Up- A Rare Long One

For their first "real" hike since dad's surgery, mom and dad headed south on the Blue Ridge Parkway last Sunday morning to Pisgah   National Forest for a moderate 5 to 6-mile hike.  The fog in Asheville was pretty thick in spots that morning, and even though rain was called for later in the day they were eager to hit the trails.  As the parkway wound its way through twists and turns and many of its amazing tunnels, the sky grew clearer and brighter, and before long mom and dad couldn't resist the urge to pull over at a few of the many overlooks to catch a glimpse of what looked like a giant sea of cotton blanketing the valley below. 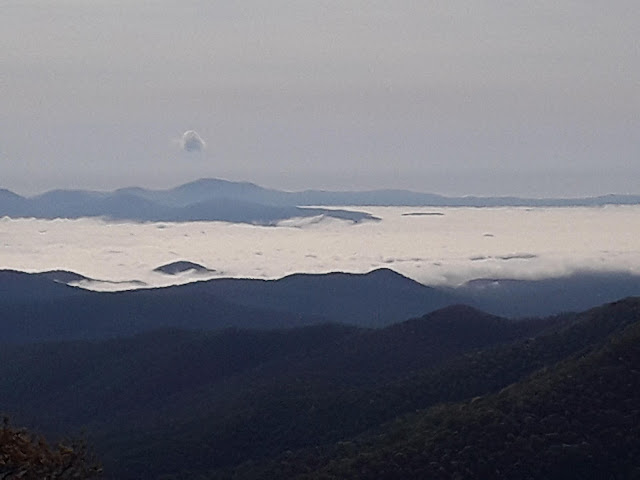 Generally, one photo or two would suffice, but bear with us as dad felt the need to put a couple of extras in. 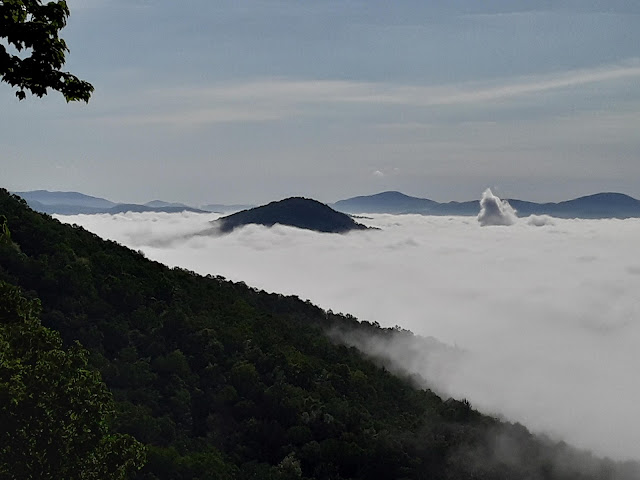 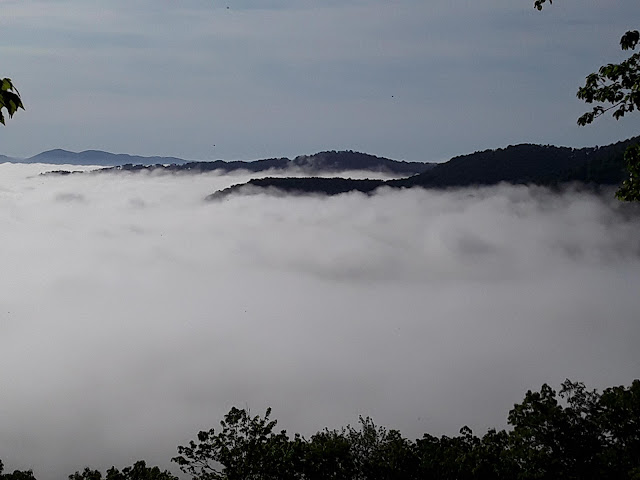 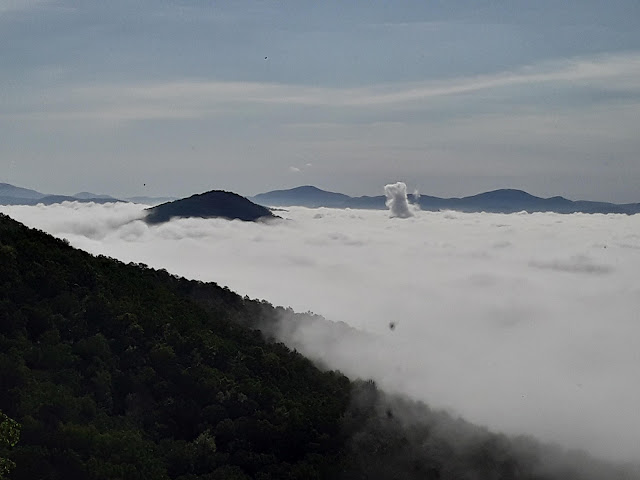 As awe-inspiring as it was these pictures just don't do the view justice.  When they hit the trailhead, the sun was shining and the air was warm, but as they trekked their way along Laurel Mountain Trail the clouds and slightly cooler air decided they wanted to accompany mom and dad on this fine spring morning.  About 2.5 miles out, rain drops and rolling thunder decided they didn't want to be left out, so together the whole party turned and headed back, albeit at a quicker pace than when they started out.

Honestly, we'd decided that 2.5 miles out was about enough for the day and were already heading back by the time the thunder started.  Sometimes the old girl likes to make things a little more dramatic and long-winded than they really are.  The part about the quicker pace, however, is true.

Long-winded?  Me?  Whatever you say, scaredy cat.  Anyhoo, after returning home and settling in for the afternoon dad, as he often does, decided to scroll through the Ring videos on his phone.  Now, it's not unusual to catch overnight visitors sauntering up our stone walkway.  Neighborhood cats, foxes and occasionally unidentifiable other such critters use the path as a cut-through on their nocturnal wanderings.  Suddenly, dad gasped with surprise while watching the videos, unaware that while they were hiking, someone a bit, umm, bigger came a-knockin'.  Yep, at about 9:30 a.m. and in broad daylight, mind you.  The first clip's only about 6 seconds long and the second one's 20 or so.

There have been multiple sightings 'round here lately, but this is the first time one has come right up to our door.  He probably looked in the window, saw me (asleep in the chair, of course), and figured he didn't want to mess with me.
Posted by Cleo's Dad at 5:54 AM 21 comments:

Since we've lived in Asheville, mom and dad have trusted Cedar Ridge Animal Hospital for all my health needs.  They're a fabulous team of caring animal professionals who are easy to work with and always make us feel welcome.  On entering the front office, one is occasionally greeted by one of the most famous names in show business.  That's right, ladies and gentlemen, let me introduce to you in all her front desk lounging tabby splendor the one, the only film and fashion icon- Audrey Hepburn. 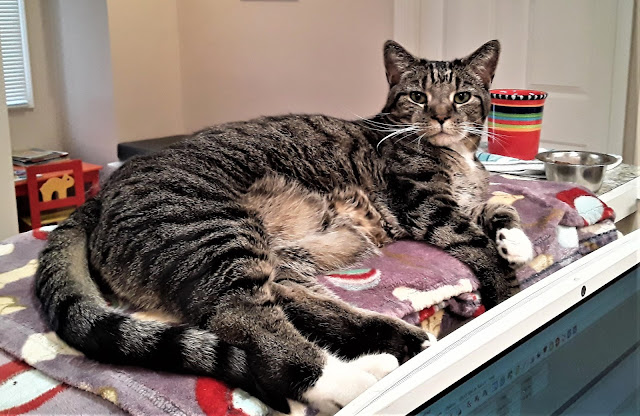 So, it's no secret that our felines have to stop and bathe whenever/wherever the need strikes.  Our old gal typically plops onto the carpet in the living room to do her washing, but once or twice now I've managed to snap a few photos of her half on/half off my her chair on her way across the table to the other chair.  Apologies for the poor focus, but consider them "action" shots of our bathing beauty. 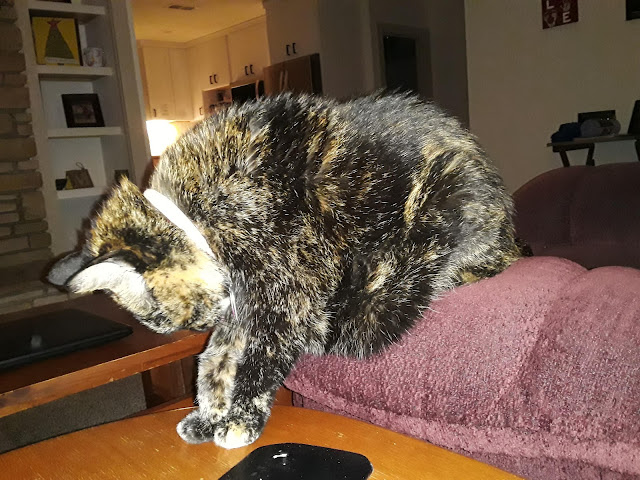 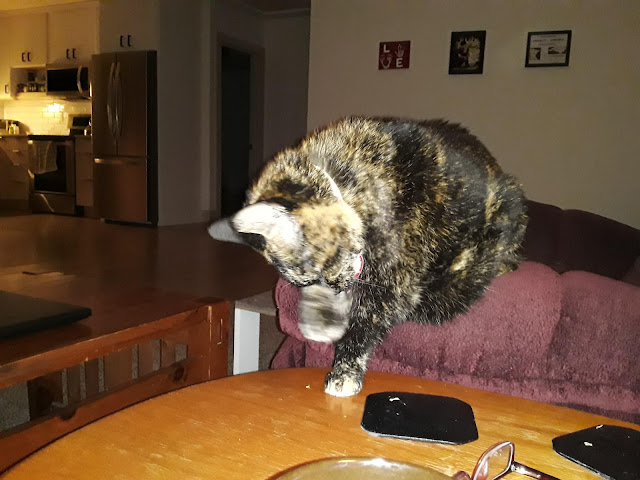 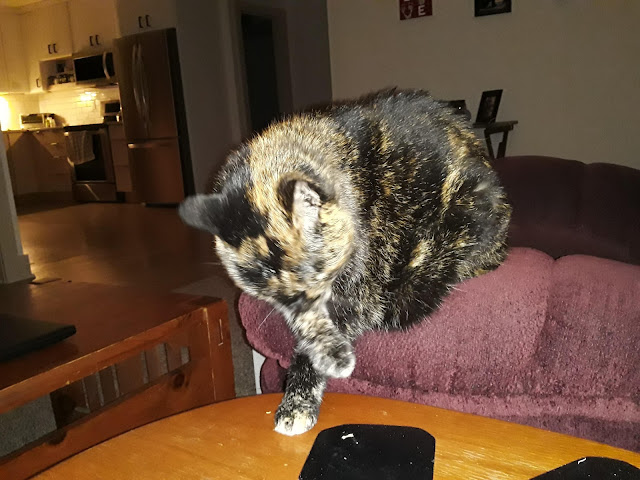 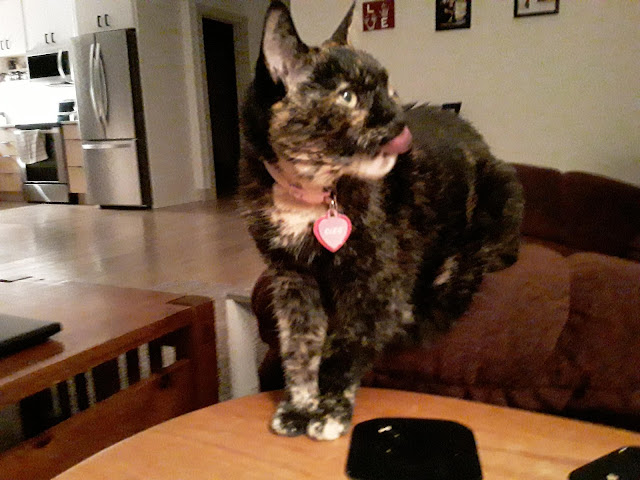 Gee, thanks dad.  Next post I'll make sure mom gets me a few pictures of you in the shower.  Bet you'd love that, huh?
The above photos were from a while ago, but I just had to update this post by adding these last two that I literally just took only minutes ago of the old girl.  I was buzzing around in the kitchen, getting ready for work and looked over in the living room to see her sitting there, staring at me as if saying "come on dad, I'm waiting for you." 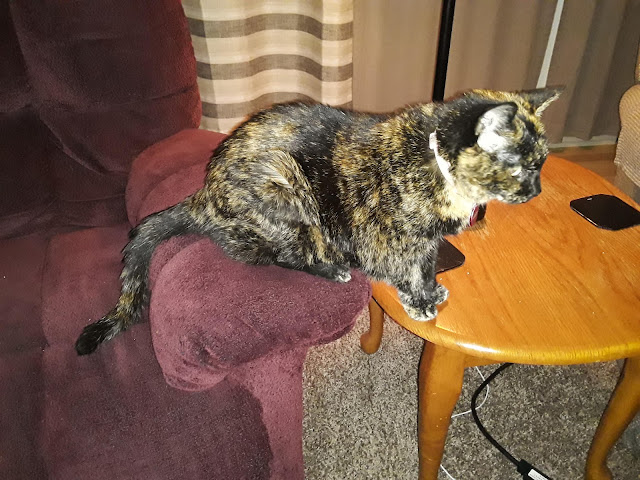 Funny story:   Y'all know that we felines have a way of developing habits and whatnot, right?  I've heard discussions between mom and dad about how I can be a slob because I take up a mouthful of wet food and eat it away from my dish, making a mess on my board.  Or how dad makes mental notes (emphasis on the "mental") of the way I apparently poop in the back corner of my box and pee against the front, often times not covering said pee and stepping through it and leaving tracks. Whatever, says I.  I could write pages of gripes I have with them.  If I could hold a pen.  Anyway, yeah, back to habits.  I fight mom when it comes to sitting in the living room, especially when I'm already there and (usually) asleep and she wants to sit with me.  She grumbles, begs and bitches, and I'm still as a statue, my expression all, like, "what, you want me to move?"  However, for who knows what reason it's a bit different when it comes to sitting with dad.  As you've seen in some posts, I like to squish in on dad's left side between his leg and the arm of the chair where I'm all nice and snug and warm. 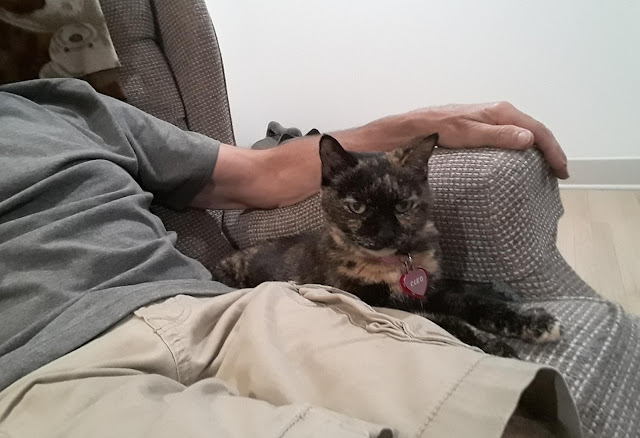 Then, when dad gets up to refill his coffee or something I'll slide right back over for him, or, most often, will stay tucked tightly against the chair arm, patient as can be. 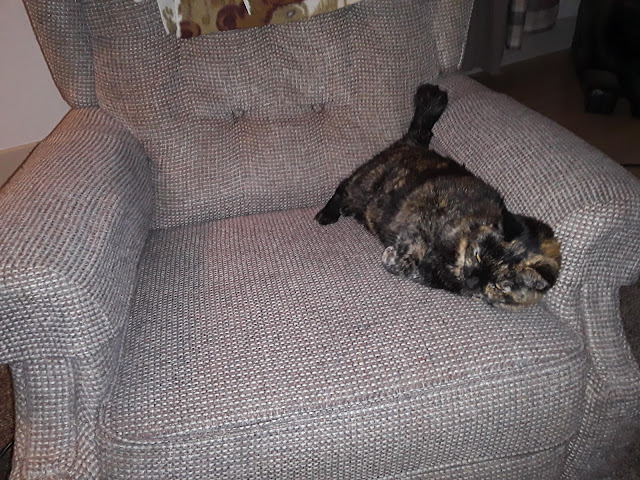