Oh brother.  Here he goes again.  The brilliant, restless one changed my damn background.  Mom and dad went and brought home some pumpkins the other day (3, in fact- two big ones (insert perverted dad snicker here) and one tiny one (and a giggle for mom).  I think that might mean one's for me).  It's that time of year when humans feel the need to carve up some freakin' gourds and display them proudly out front for all to see.
They took this picture at the church where the pumpkins were piled all over the place just off South College Rd.  I'm telling you- it's fascinating what you humans do for fun.
I suppose that means they'll also be wearing makeup, cross-dressing, and pretending to be something they're not again.  Oh, and then there's the bowl of candy that they eat most of pass out to trick-or-treaters.  I guess we all have our things... 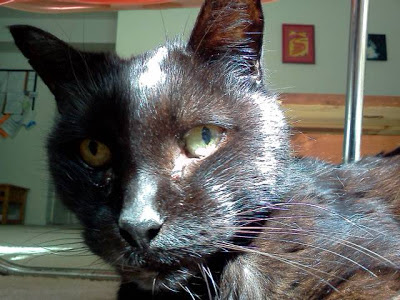 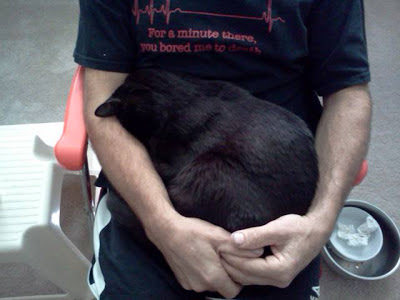 Ahhh, what's better than a nice warm dad-lap on a cool autumn day!  This is how I can usually be found most days.  Lately, for whatever reason, I've really been insistent on worming my way onto mom's and dad's laps.  Maybe it's because I haven't been able to sleep with them?
Even when they're eating or using the computer- actually, especially when they're doing either- I've got to get right up in there and push my way in.
It's all about me, dammit, and I won't tolerate any of this too-busy-for-orbit b.s.   I love it when they make a "nest" for me like this!
Posted by Cleo's Dad at 6:03 AM 7 comments:

Just A Little On Edge?

Dad scared me when he came in the door the other day.  He pushed open the door, not knowing I was right behind it, exploring, and up I went.  I jumped sideways and skittered over towards the coffee table.
My back was to him, and he walked over to me and, without meaning to, I'm sure, scared the crap out of me AGAIN!  I jumped, turning in mid air and landing all out of sorts.
I guess I was just particularly edgy that day, for whatever reason.  Who the hell knows.  I'm sure he didn't do this on purpose, but it irritated me that they both laughed heartily at this, something for which I will repay them.  Many times over.  Just wait and see.
Mom likes to hide behind the front door when dad comes home and jump out, yelling "Boo!"  He'll deny it, but she gets him almost every time.  Maybe I'll try that when they least expect it.
Dad tries to do the same to her, but he usually fails.  I'll think of something else for her.  Some day.

Here we are on day three of being banished from the bedroom during the night, and I'm not very
happy about it.
Mom and dad, I love you, and I will continue to do so by allowing you to take care of me, but you are total asshats for not letting me sleep with you anymore.
I am a cat.  Cats meow.  We are nocturnal.  We have no sense of time. End of story.
How would you two like it if every time you wanted to sit in my chair I came along and shooed you out of it? Or how 'bout I put up a chain link fence topped with razor wire around said chair.  And electrify it.  There.  Not too cool, huh?
I'm sorry you haven't bee sleeping well because of me.  I want to talk to you when I want to talk to you, and that's that.  What about that crazy loud train, like the one that's going by right now?
Are you going to block the tracks so it can't get by?  Do you think you can stop that?   I think not!  I don't know why I'm doing what I do lately.  You've allowed me to sleep with you for years, and it's not fair for you to cut me off now because of some silly occasional... disturbances (says YOU).
I'm going to sleep now, since someone feels the need to interrupt me and take the computer away from me.  Maybe I should put a lock on their door so he has to stay in there until I say he can come out and bother me.

Dad got back this past Monday, and has been pretty much straight out since.  He had a great time visiting the kids and meeting his new grandson, and came back with something called a hard drive, with over five thousand pictures on it.
Okay, so not all of them were from his visit.  Only about half of them were.  Not really.  Maybe a few dozen, but the rest were from his oldest son's collection from over the years, and dad and mom enjoyed going through them all.

Dad says they've brought back some great memories and showed him some details from his son's life that he hadn't known about, and mom's been hard at work sorting and arranging them in the computer.
The weather out in Minnesota last weekend almost couldn't have been better, according to dad.  He had a great time, playing with the baby, meeting his youngest son's girlfriend for the first time, watching his oldest son coach a football game, and helping with a few things around the house. 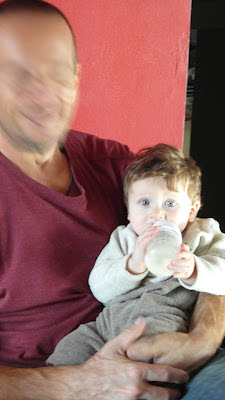 Though unplanned, dad was happy with the way this photo came out, since he's not one to have his handsome, graciously-aging face made too public.  This was how he spent much of the weekend.  The baby is a mover, and when he got a little cranky (the baby, not dad) all it took was a walk around the house to quiet him.

Dad's had a busy week back at work, and I've been back to my zany early morning alarm clock antics.  The other morning, however, dad got a nice surprise when he awoke.  Sneaky, crafty mom had hung a big "Happy Birthday" sign on the living room wall, and planted little homemade cards with "51" on them and tiny notes inside.
She left him a delicious lemon poppyseed muffin on the counter in front of his coffee maker for when he got up, and I left him a special chocolate treat with my own little card on the coffee table in front of the chair where he reads in the morning.
Last night when he came home from work he was greeted by mom (I'll have to be careful here not to share more than they'd want me to) in a slinky black skirt and black heels, a bottle of champagne, candles all around the place, and a delicious steak dinner. 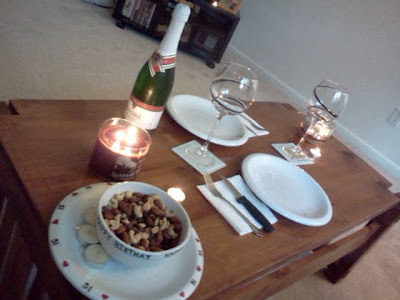 Note mom's hand-
decorated plate and bowl, which mom filled with one of dad's favorite good-for-you snacks (they're trying to eat healthier so they can stay around to annoy each other longer- I don't remember which one I heard say that...).  Funny- I've made it as many years as I have without eating that kind of crap.  Hmm...