How's That for Balance

Gotta love that string!  I just can't get enough string playtime.  I've got an assortment of laces and such on my mat, and that damn string is one thing I just can't stay away from. 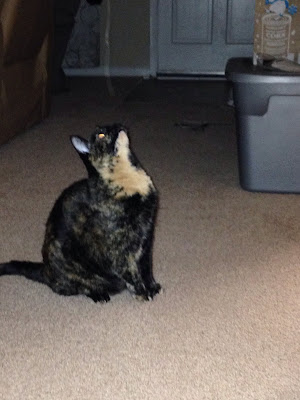 I've pretty much chewed the crap out of my laces.  I've now developed a habit of sitting in front of dad and staring at him while he sits on the corner of their bed flossing his teeth at night.  He does his thing, and then dangles the floss in front of me and I swat and bat at it with glee. 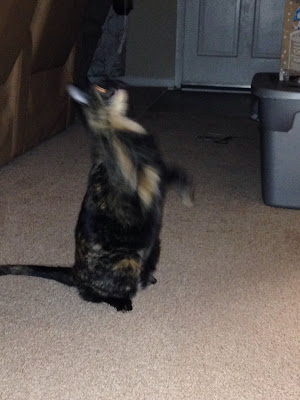 Until he settles it on my head where I can't see it.  I know it's there, I can feel it, but it's not fun when I can't see it to swipe at it and chew on the end.  So I walk away, no longer interested. 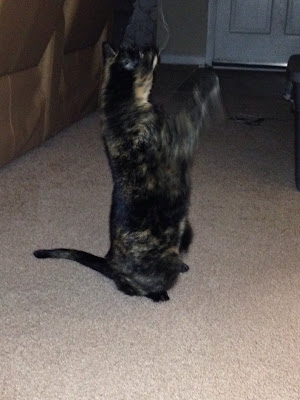 Even though I'm a large girl (shut up, dad) I'm flexible and agile, as you can see.  Yeah, they make fun of my shape and my weight distribution, center of gravity, blah, blah, blah, etc.
Like they're perfect...
One day dad was removing slats from a set of mini blinds to adjust the length, and had the string that holds everything together layed out on the floor.  Nope, couldn't stay away from that, either. Like I said, gotta love that string. 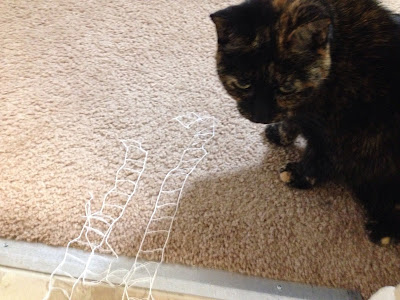 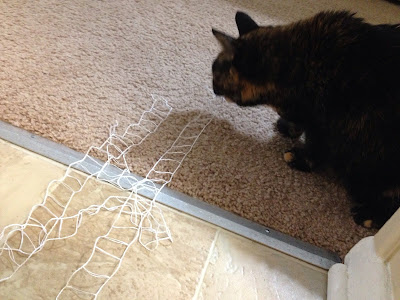 Part of dad's job is to inspect recently vacated apartments for damages, left-behinds, etc., and one day recently he walked into a unit, noted how well cleaned it was overall, but was stopped in his tracks by the overwhelming scent of poop.
Dad searched high and low, looking into every cabinet and closet, opening drawers even.  He couldn't pinpoint where the odor was coming from as it pretty much permeated the entire apartment.
On a whim he decided to pull the refrigerator away from the wall, and lo and behold, there, occupying the space beneath the refrigerator was a 20 or so piece collection of crusty turds that had to have been batted there by the previous resident's feline occupant.
Yeah, a photo would've made this post a little more powerful, but dad didn't feel it was proper to share for work reasons.  Besides, I'm sure you've all seen a bunch of poop before, right?  Maybe just not on the floor under the refrigerator...

Mom'll Smack Dad for Posting This One

You know, much as dad pretty much retains the title of chief ass hat, mom can occasionally (though not too often) be a bit of one.  There we were, sitting all together one night enjoying a healthy snack (them, not me) and relaxing a bit and mom decided she'd entertain dad (or herself, perhaps) by dressing me up with her orange peels. Who does that?  Why, oh why do I have to endure such humiliation?
You know those (very frequent) times I wake them up at all hours with my incessant pigeon cooing I'm so good at?  Well, you know what they say about payback...
Posted by Cleo at 5:49 AM 19 comments: 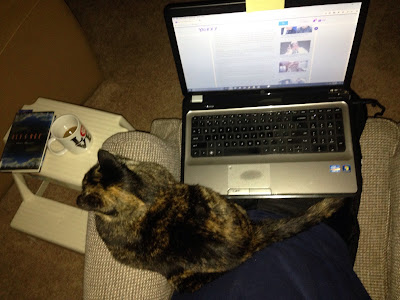 That's what the big guy titled these pictures, CleoDadMorning.  How original, pops. 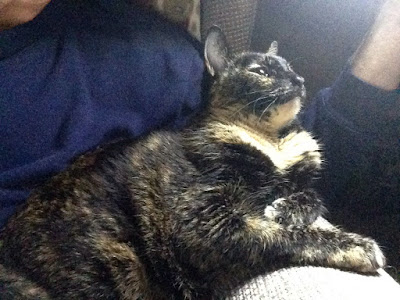 Because they take so many gosh darn cute pictures of yours truly, dad's taken to labeling them for easy identification, I guess.  Whatever.  I suppose it's better than WP20012064_01 and the like. Pretty soon you're gonna run out of words there, mister. 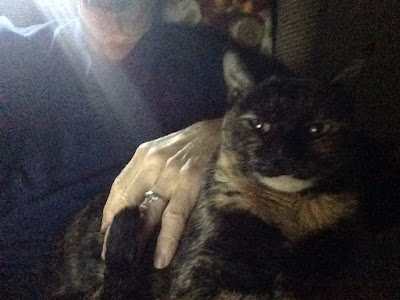 Even when the damn laptop's there I insert myself right onto dad's lap, because that's MY space. 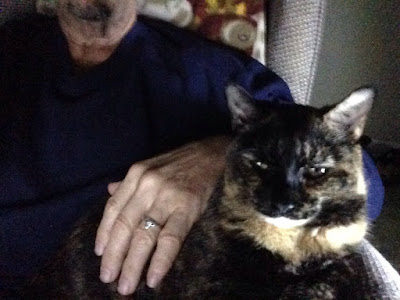