I'm not sure what it is, but since mom and dad returned from camping it seems I've been wanting to spend a lot more time on their laps.
Mom's lap has been a somewhat regular favorite place for the most part, and dad's has been growing on me (depending on what he's wearing).  As I mentioned previously shorts and bare legs haven't been my thing, but yesterday I was in heaven.
The high temperature was "only" around 80, and mom actually brought out the fleece blanket that's usually reserved for the cooler weather. 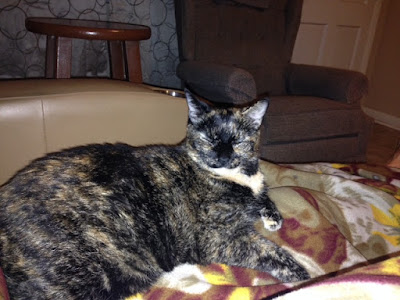 Being from up north mom and dad, since living down here, have always shaken their heads at the southerners surrounding us with their air conditioners seemingly running nonstop from March to November.
Yesterday was a departure from the 90's we've been having lately, and they had all the windows open, fresh breezes flowing through the whole apartment all day.
Ordinarily it's not unusual, even with warmer temperatures, for mom to throw on her sweatshirt while dad is sitting next to her sweating his butt off, but yesterday even he got a little chilled. They loved the fresh air and didn't want to shut the windows, so mom shared the fleece with dad, and once I saw that I couldn't get enough lap time.
I can't wait until the real cool weather comes.  I know where I'll be spending most of my time! 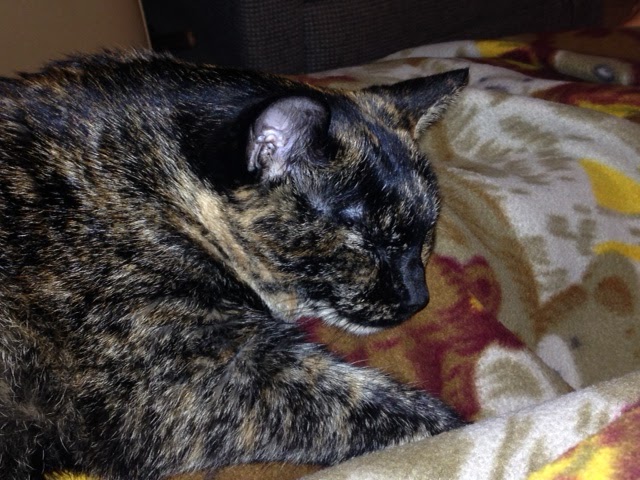 Well, they're back.  Yeah, obviously it's taking dad some time to get back on here with me. My quiet time is gone.
Remember "All By Myself",that awesome Eric Carmen pop hit from 1975?  You remember it, right?  Right?  Are we aging ourselves here?  Mom likes teasing dad with that song in her beautiful special off-key way whenever she thinks he's not paying attention to her.
Dad says he used to have the 45.  I'll bet some of you don't even know what that is.  Anyway, I'm getting off track here.  Mom and dad returned from their camping vacation at Carolina Beach State Park refreshed but tired, relaxed but antsy and wishing they were still out there.
I think they got the beach bug in them.  All I've heard since they returned is how they hadn't realized how much they loved being so close to the beach before dad grew restless with his job a couple of times over these past few years, which took them from Wilmington to Greenville, SC to Chapel Hill.
The day they rolled into Wilmington they were surrounded by thunderstorms and heavy downpours, but they didn't care.  They were on vacation.  They pulled into a parking garage and wandered around downtown and the riverfront, getting thoroughly soaked.
Hungry and wishing to avoid the rain when they realized their umbrella (mom did suggest using two of them dad, you dumb-ass) (mom's sentiment) wasn't quite cutting it against the pelting rain they found their way to The Copper Penny, one of their favorite places.  They sat out the rain with a delicious lunch and a couple of frosty glasses of beer, and reminisced about the time they spent living here a few years back.
The rain eventually let up, and after walking off some of the beer lunch and popping in for a couple of Kilwins ice cream cones made their way to the state park, where they set up camp and planted themselves for the next 4 days.

The Wilmington area forecast up until they actually left Chapel Hill had been calling for rain and storms pretty much every day, but they ended up with the most perfect beach weather all week, and spent every day at Fort Fisher Beach.
Good Hops Brewery, within walking distance from the campground had just opened up before mom and dad moved away from Wilmington and they never got the chance to check it out back then.  One day after lounging at the beach they walked over for a couple of brews, and, well, just check out the picture.
It's a cool little place far enough away from the hustle and bustle of Carolina Beach and, being mid-week wasn't too busy.  As you can see the bar held a mixed crowd of "folks", all very friendly and laid back.

Other than spending all week at the beach mom and dad relaxed at camp, enjoying cooking over the fire every night, dad not bitching about happily getting used to having to start a fire each morning and waiting for the coffee percolator to finish bubbling his lifeblood to his desired strength.
The camping was peaceful and quiet, with the exception of the obnoxious mansion on wheels with the garage-sized gas generator rumbling sunrise to sunset.  You'd think the tent sites would be separate from the ones where people feel the need to bring their entire home with them.
Okay dad, you got that bitching out of the way.  Happy?

Anyway, they're back.  Dad was in heaven barefoot, shorted and shirtless nearly all week.
Dad's co-worker took awesome care of me while they were away, stopping in each morning to top off my dishes and scoop my poop.
Dad's back at work ("grrr....," he says), mom's got everything washed, packed away and cleaned up 'til next time (I'm thinking "next time" is gonna come sooner than later since they had such a ball and miss the beach so much), and everything's back to normal.  Plus this post is getting way too long and I don't want to lose any of you.

Some Time to Myself and Big Steps in Getting Comfortable

It's confirmed.  Mom and dad are going away and leaving me all alone.  They had dad's co-worker stop by the other day to meet me and discuss my nutritional needs and what to do with my, umm, peeballs and pooplogs.
Yeah, I've got to hand it to this guy, being willing to scoop my stuff and dispose of it out of the goodness of his heart.  He told mom and dad he's always loved cats, and if his wife wasn't allergic they'd have one of their own.
So anyway, they're heading back east to camp for the week at Carolina Beach State Park.  You should see our place- mom's got stacks and piles of clothes, bedding, food and equipment all over.  Ever the organizer, she's been spending weeks planning everything, and they'll be loading the car tonight or tomorrow morning and heading out.
I'd say I'll throw a party while they're away, but they're not too keen on anyone being here when they're not.  They'll be back before next weekend, and I'm sure I'll enjoy the peace and quiet.

They've been struggling to get me to sit on their laps in their big special chair, especially when they're wearing shorts of any kind.  I only recently started to sit on mom's lap, and I try to keep the bulk (shut up, dad) of my body on the fabric of her shorts.  As for dad, well, I usually don't sit on his shorted lap, especially when he wears his sexy blue shiny slippery lounge shorts (yeah, he made me type that).
Well, I don't know if it's because I'll miss them or what, but here's what transpired just the other night.  They were watching a movie, and I got up on the arm of the chair between them, and then stepped down onto his sexy blue shiny slippery lounge shorts (okay dad, just stop).  I settled myself right down across his lap and just enjoyed sprawling out in surprising comfort for the duration of the movie, even dozing a little.
This shot kinda gives you a good idea of my incredibly lovable size (nice try, dad), and an up-close eyeful of them damn sexy blue shiny slippery lounge shorts (once again, not me).
What you don't see is his cleverly cropped out rubbery, sagging, deflated spare-tire-around-the-middle he hasn't been able to make disappear since losing a bunch of weight (gotcha, funny guy!)

Though an older gal, Cleo now and then lets her playful side show.  We're trying to get her to be a little more active in hopes that she'll slim down to a healthier weight, and she does occasionally surprise us with bursts of energy and lightning quick swats and grabs at some of her toys.
She's got an assortment of colorful balls, some catnip mice and a few other things, but her favorite plaything is string.  That's it.  String.  Catnip, though at first gets her going, seems to bore her after a minute or so.
She loves chasing string, and we'll run around the apartment, trailing a 5 foot long piece and laughing as she trots and scuttles after it.  And then she plops down.  Sure, she'll swat and swipe at it if we're standing close enough, and once in a while she'll get up and come after it again, but I think we get more exercise out of it than she does.
She's also shown this interesting behavior where she talks and chatters at us, much the way she does when she's hungry, and leads us to her toy collection on her favorite mat.
She sits in front of her toys just looking at them, and when I start to pat her behind and scratch above her tail she begins to play with her things, sometimes going crazy rolling around and chomping heartily on her catnip mice.
Now, I've seen some of the videos and read a handful of articles about the whole cat spanking thing (there's an eye-opening amount of it out there), and it's certainly an interesting trait.
Orbit used to enjoy a hefty patting above his tail.  My old pal Isaac loved a hearty smacking.

I'd hoped to have a handful of action shots to add to this post, but the ones I've got so far don't show much of Cleo's playful side.  They do, however, show how our play sessions most often end up.  The dear old girl seems to bore easily.  We'll try some other things as time goes by, but for now we'll make do with her shredded piece of string. 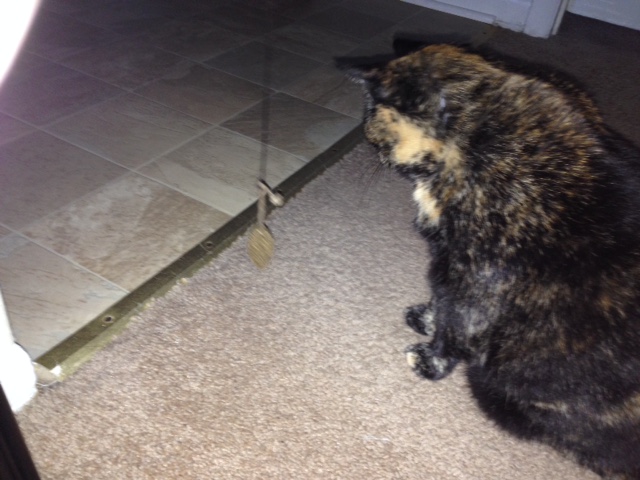 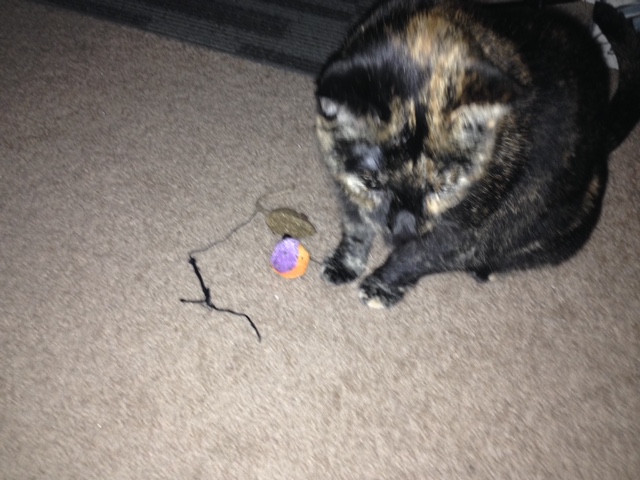