A Day Late, But Who Cares 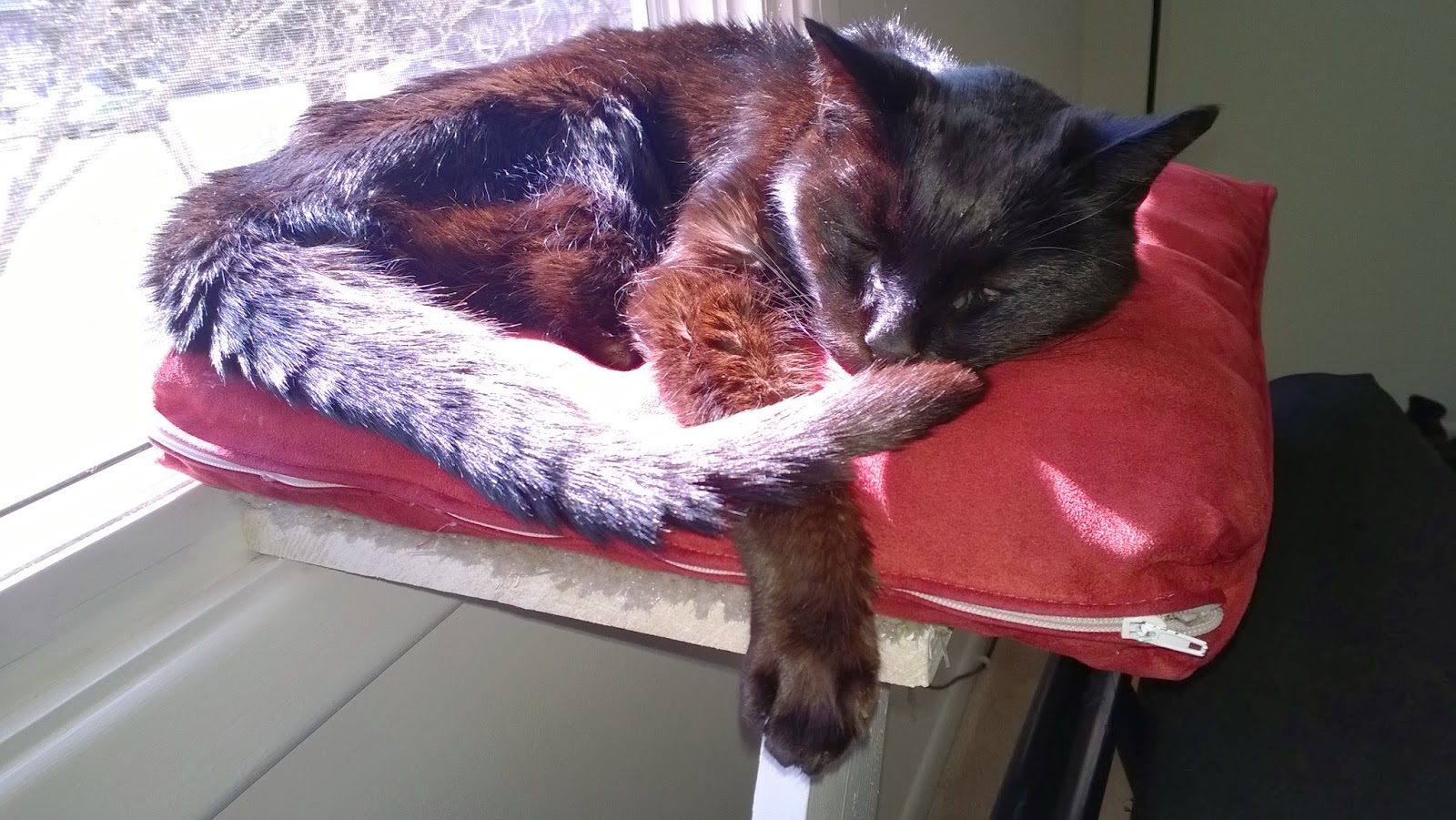 Though I've never been one to join the crowd and do a "Wordless Wednesday" post my original intention was to do just that with this particular photo.
Yesterday's weather was about as perfect as it could've been, and my brilliant, procrastinating father had every intention of putting this up on here for our first ever WW post, but, well, like I mentioned- he's made it his life's goal to "put off til tomorrow what he could do today".  'nuff said.
I know this photo isn't too different than many others I've posted, but this simply shows what a glorious day yesterday was.  The fresh air, the warm breeze and the ideal placement of the sun's rays added up to a near-perfect day for this ancient, deserving, hardworking ruler of the roost.
Just to show how tightly I have these two wrapped around my paw- I was actually asleep on this pillow down on the futon, and dad picked me and the pillow up and placed us on my perch this way.  Once mom learned this she made sure to give dad a good ribbing about spoiling me.  So what if he does?  She's just jealous...

Okay, so it's been a couple of weeks.  Lots of stuff has been going on.  Stuff that has nothing to do with me, but I'm going to write it anyway.  Because I can.
I'm still healthy overall, and as long as I'm breathing I'll put whatever the hell I want in here.
The ice storm we had was a real shocker for this area.   Where we're from it would've been nothing to blink at, but it seemed like the world shut down for three days solid.
I do feel bad for the areas that got hit the hardest, and especially those that weren't prepared to handle such weather.
During the week of that storm dad was gone away to a 3-day conference for work (translated: meetings, food, and beer, not necessarily always in that order).  He said they only got about an inch and a half of "normal" snow while he was in Charlotte, so he missed the worst of what we got here.
After he got back it was as if his and mom's vehicles missed their attention and started acting up.  Both began spewing fluids (the vehicles, not mom and dad) of different colors.  Mom's transmission decided it preferred to run dry, and dad's brakes thought they'd operate more efficiently without that precious lifeblood running through their lines, which turned out to be quite rotted (it IS a New England truck, afterall.  Up until we moved down here the underside had been nicely coated with salt every winter).
Three days away from work means that dad has been scrambling to catch up, and has yet to achieve that (though if you ask me I'd say he runs around like a chicken with its head cut off most days anyway).
So, my teeth are doing okay.  I've finished with the anitibiotics, but they still force that sh*t that's supposed to taste like chicken toothpaste in my mouth every day, which I can't stand.  One of these days I'm going to bite dad's finger clean off.
I grumble and growl every time he sticks the damn thing in my mouth, and he and mom have a good chuckle at the noises I make.  I'll show them one of these times...