Bear with me as I do yet another non-me post about, you guessed it- food.  Not mine, of course.  You know, it's funny how the big guy thinks he can make art out of their food, but with the special kidney diet kibble krap I'm supposed to tolerate til the end of time there's only so much you can do with little brown pellets, you know what I'm saying?

So I know we've shown you similar photos a time or two, but this was their breakfast one recent Saturday morning.  Dad enjoys cooking breakfast on weekends, when they most often have bagels and eggs in some form and with a varying assortment of accompaniments, and whole wheat blueberry pancakes on Sunday.  I know dad's looks like a face, but he swears he didn't do that intentionally (pssst- he's lying).  Dad likes his omelets with anything he can dig out of the fridge in them.  On this particular morning he folded in mushrooms, onions, fresh garlic, zucchini and avocado. Mom's got this thing about greens on her bagel, and you might as well say she's having a spinach salad with a bagel with cream cheese and scrambled eggs under it.  Anyway, there you go.  As he always occasionally does dad asked me what I thought of our post before publishing it.  All I can say is B-O-R-I-N-G.
Posted by Cleo at 5:56 AM 15 comments:

The old girl, though occasionally gruff and full of attitude often, surely has her charms.  One of her most adorable habits is the way she crosses her paws while lounging. 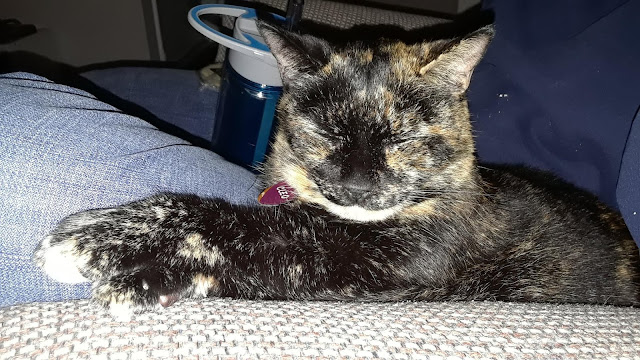 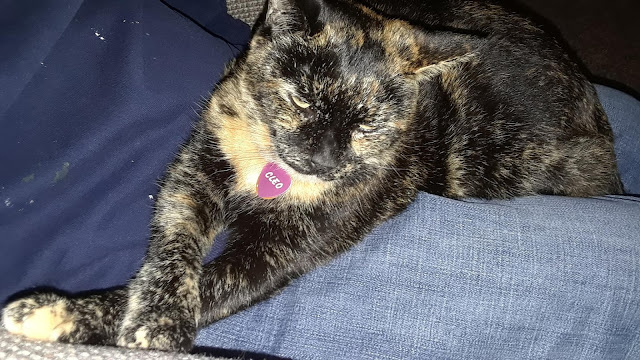 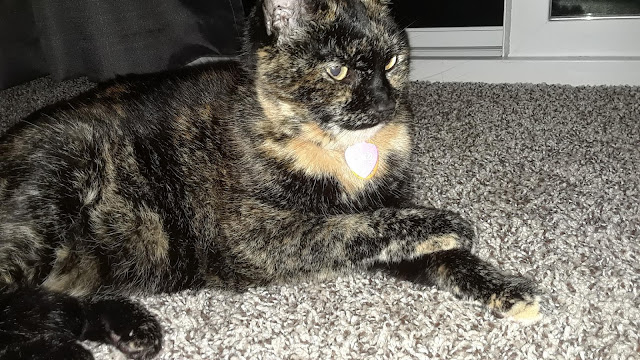 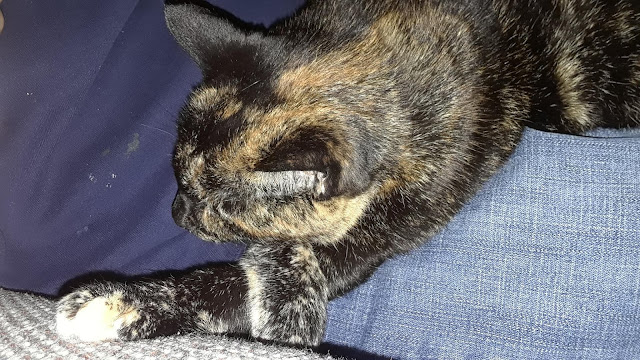 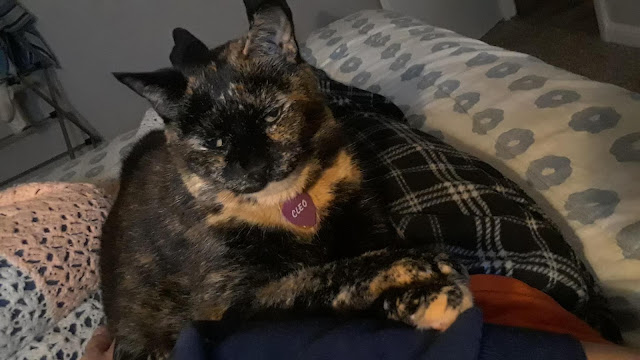 For all the ribbing she and I give each other (yes, it does go both ways, really, I swear) She honestly is the most loving, snuggly old girl one could ever ask for. 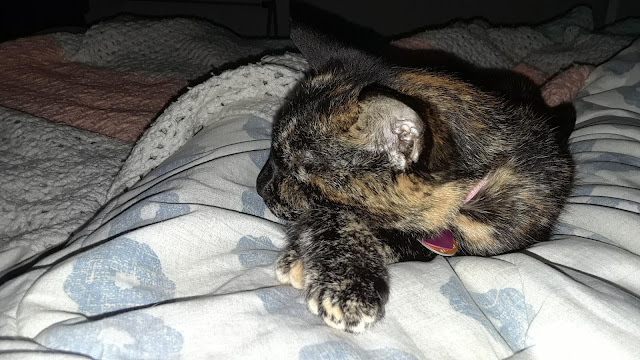 All but this last photo were taken over the past few weeks or months, but this last one, a late post addition, was just snapped last night as we settled in for the night.  As she does most nights Cleo hops up onto the bed and pads at a sloth's pace onto mom's lap.  In super slow motion she lowers herself until she's sunken as far as she'll go, then rests her chin and slowly nods off.
Posted by Cleo at 7:34 AM 22 comments:

No, not that kind.  I meant pictures. In a previous post Mr. Crankypants and I showed you photos of me on some stools, and mentioned how to this day I take advantage of one or the other of them vacating their stool . 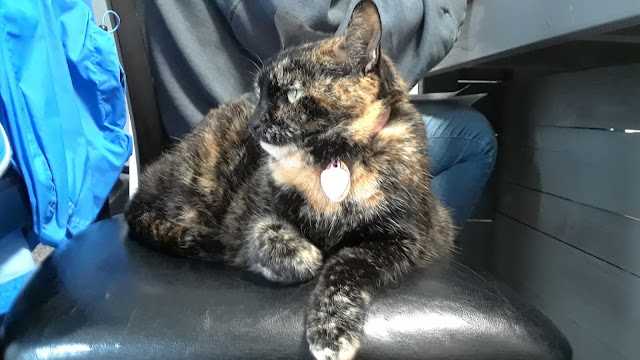 Well, you snooze, you lose I say. They were doing some paperwork on this particular evening and dad got up for something or other, so I hopped right up and put his derriere's still-warm spot to good use. 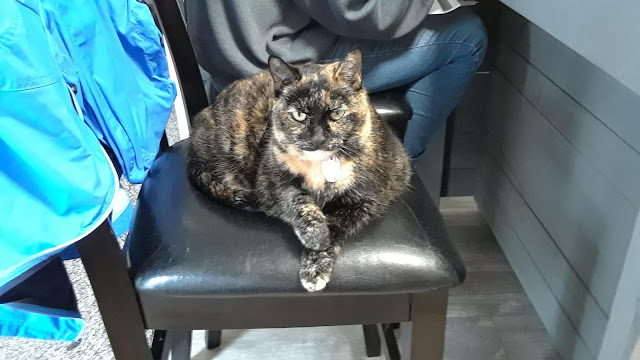 I've gotten them wrapped right around my paw so they don't even try to remove me now.
Posted by Cleo at 5:19 AM 18 comments:

In Spite of a Previous Post About Me Not Liking to be Held...

Yeah, I know.  This kind of disproves that, but this is only ONE photo.  And it's been doctored so you can't tell how vigorously I'm struggling to get down.  Seriously.  No, really.
Posted by Cleo at 5:10 AM 21 comments:

For a senior lady I still enjoy some daily youthful, energetic play time.  I have my shoelaces, my 'nip pretzel and my new jingly balls, and mom and dad are pretty good about keeping me entertained. Though my 'nip pretzel has seen better days I still relish a round or two with it, especially when dad plays with me right before bedtime.  This is our nightly ritual, and when I don't get enough before hitting the hay I let him and mom know by dragging my shoelace around the apartment in my teeth, moaning and wailing until one or the other of them comes out from the bedroom to see what's wrong.  Of course, you know that I know that they know there's nothing wrong with me.  I usually only want a little more play time.  That's all.  Is that too much for a playful old gal to ask?  My pretzel has certainly seen better days, as you'll see in the last photo.  It's only a matter of time before it needs to be replaced.  Most of these photos could easily fall under "fails", but dad claims they're action shots.  Okay, dad. 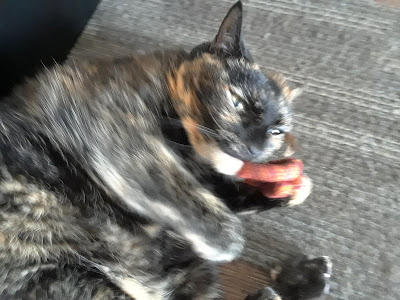 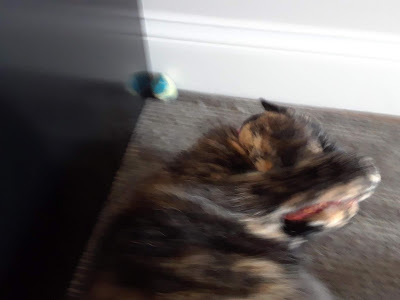 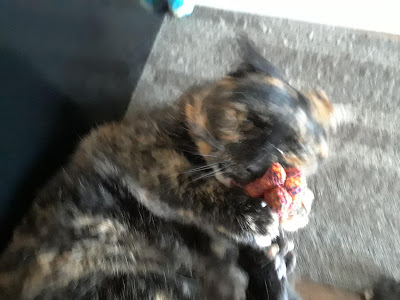 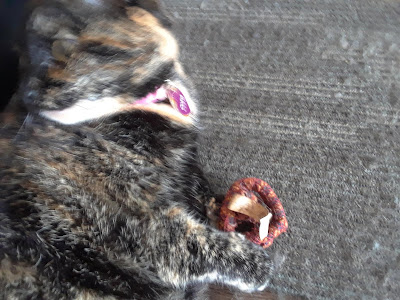 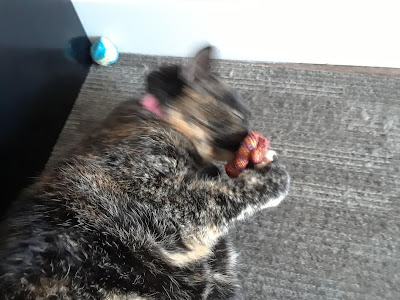 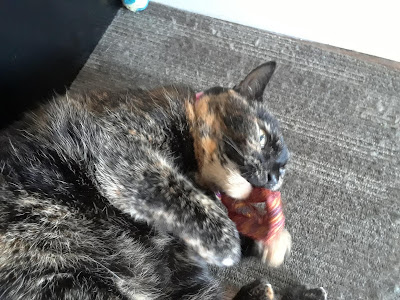 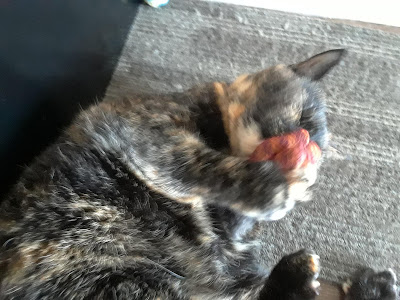 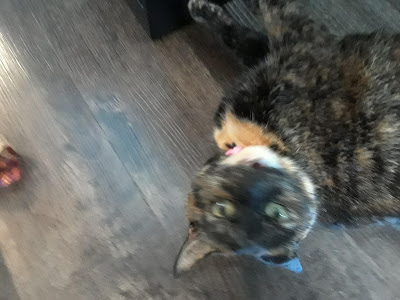 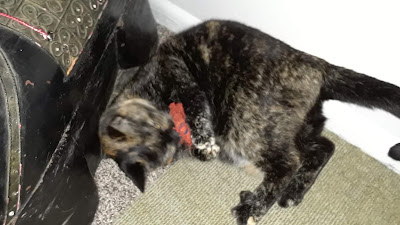 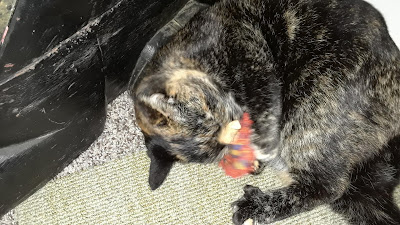 In spite of her advanced age (well if that isn't the pot calling the kettle black) Cleo still has a bit of spunk in her and proves it from time to time by displaying her climbing & jumping prowess. 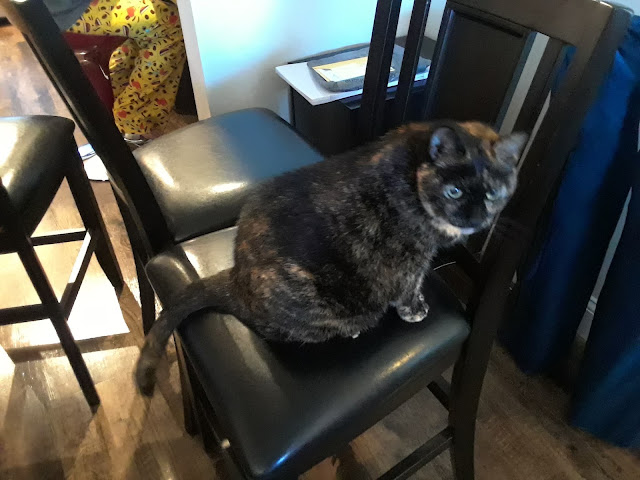 These photos are from about a year ago and highlight the old girl's (excuse me, Mr. Almost-60) amazing agility.  We had some stools side by side and a glass coffee table nearby (translated: dad used to bring a bunch of shit home for mom to clean and decide whether to donate, keep and use or sell), and Cleo impressed us by hopping up and down onto and off of the stools often. 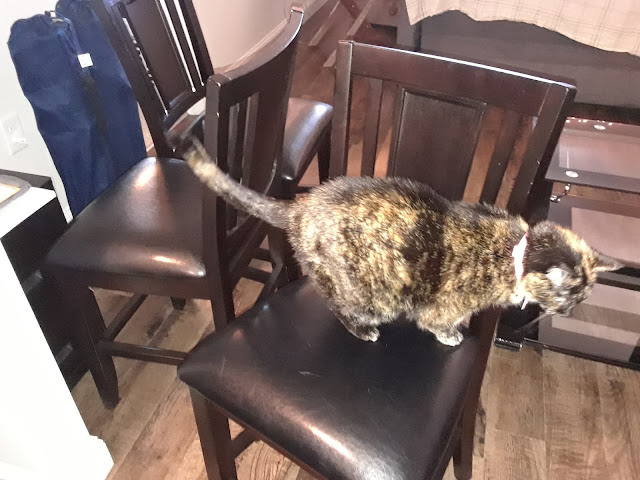 If you look closely at the pictures showing her straddling the stool and the table you'll notice her sagging midriff (once again, the pot/kettle thing), something we're still trying to minimize (a battle you're more than familiar with, Mr. Muffin Top?). 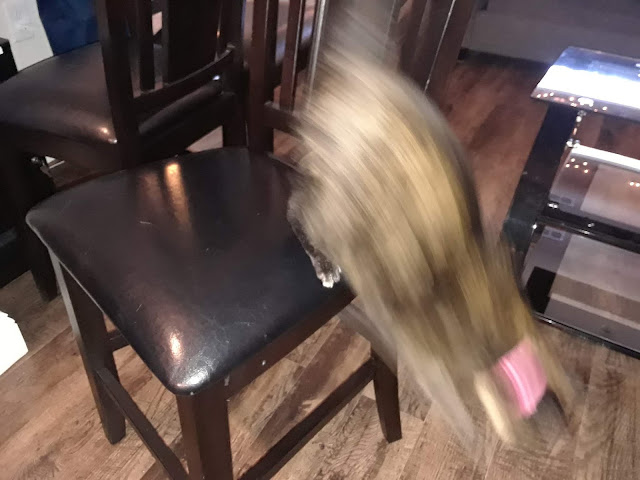 So anyway, all but two of the chairs and the coffee table are gone now, but Cleo still occasionally hops up onto one of the stools, most often when we're eating dinner. 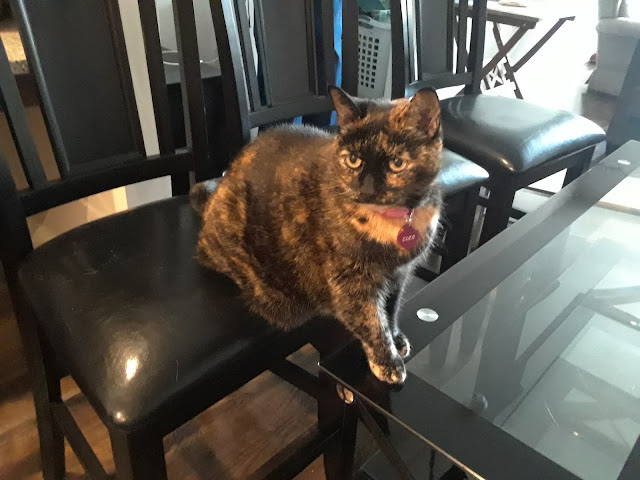 If one of us gets up to get something she'll jump up and settle right in, taking advantage of the still-warm spot.  When we try to sit back down we don't have the heart to remove the large furry multi-hued obstruction (speaking of large furry and multi-hued don't you need to shave the salt & pepper sprouting around your waddle & jowls today, dad?  And while the razor's out how 'bout you have mom tackle your back forest, hmm?), and she certainly isn't willing to give up the space, refusing to budge or move over enough to let us sit comfortably. 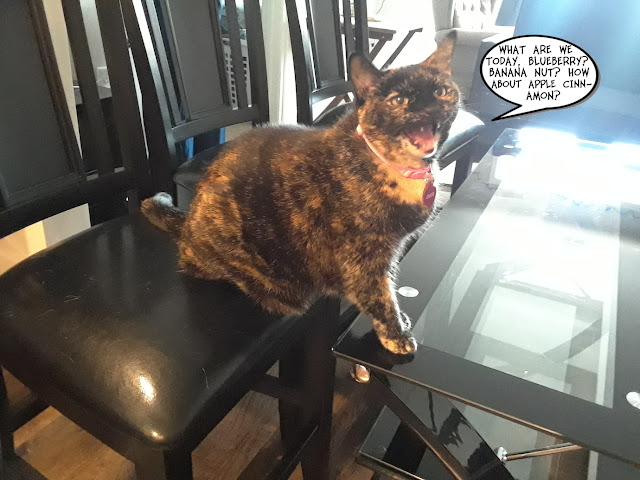 Okay, I think we'll call it a day on this one.  Seems to me someone's in an A-holey mood, so let's change his diaper, get him his sucker and tuck him in for a nice long nap.  Sound good, big guy?

note: as even-keeled as dad usually is (he's a Libra) he doesn't sleep enough, and I think he's possessed by the crank demon this morning.
Posted by Cleo at 4:41 AM 18 comments:

One of Cleo's most endearing traits is the way she places one of her paws on us while she's sitting with us.  She hasn't always done this, and I'm not sure when she started this habit, but it's just so adorable when she does it.  If this isn't "awww" inspiring I don't know what is.  Here's a gallery of these touching photos to start off the new year. 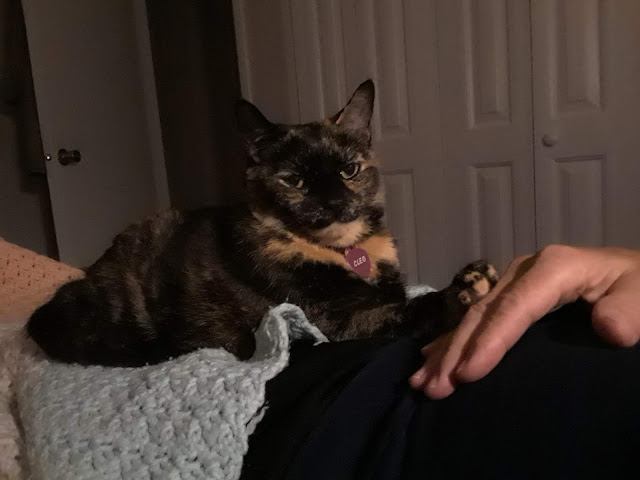 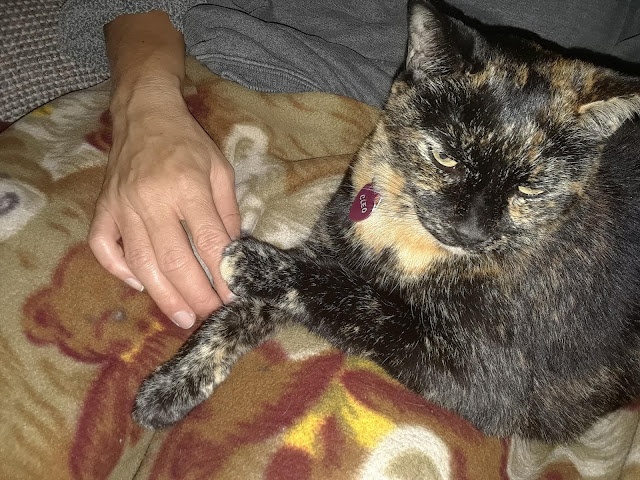 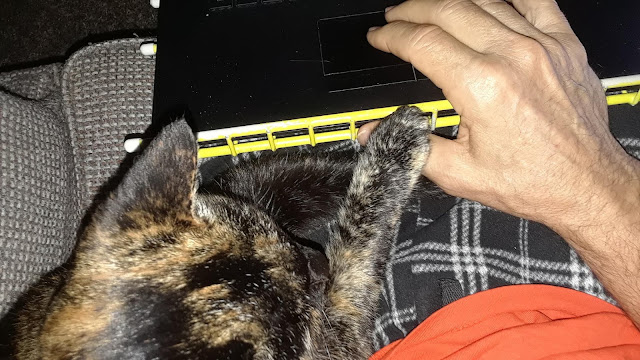 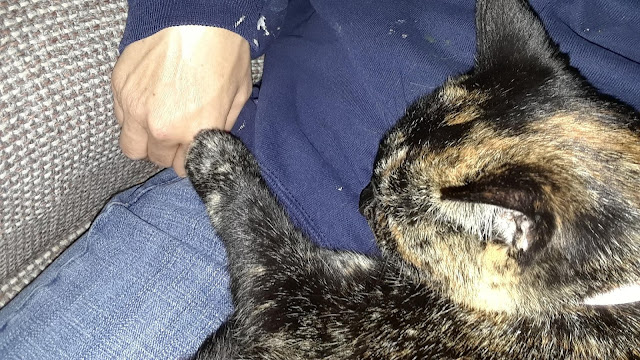 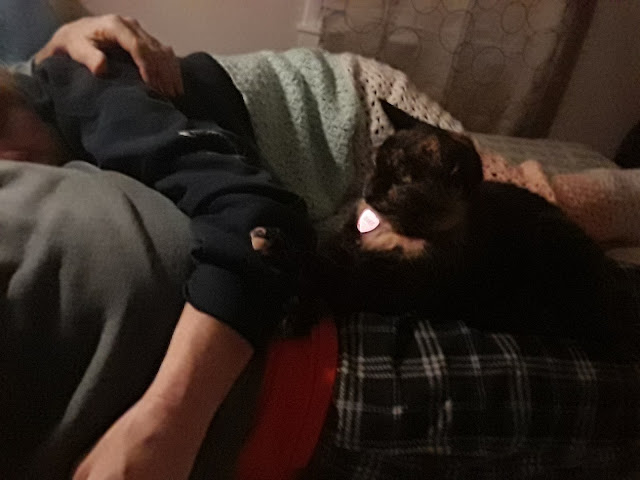 This last photo shows one of her favorite habits.  When we get into bed for the night or lounge on the bed, reading, we're not complete until she's atop one or the other of us.  Occasionally she'll be happy to curl up aside mom and once in a blue moon she'll nestle between us, but most often she's right at home like this.  Mom's is her preferred lap at night, though now and then she'll settle for dad's (honestly, it's pretty much only when mom wants to lay on her side that Cleo chooses dad's lap).  No, dad, honestly, I'm just more comfortable on mom's lap.  Get over it.
Posted by Cleo at 6:00 AM 19 comments: