It's official.  Mom and dad are grandparents.  Dad's oldest son called him last night with the good news.  They had a healthy eight pound, nineteen and a half inch baby boy!  Congratulations, Gramps!  If you didn't think you were before, now you really ARE an old fart.
I still remember when dad's oldest was just a little guy, and now he has a little one of his own!  Time flies so fast.
Posted by Cleo's Dad at 7:39 AM 11 comments:

Well, I don't have much to say today.  Apparently, I haven't been quite myself lately, and I've got mom and dad a little worried.  Mom had to call dad at work yesterday because she was concerned that I seemed to be a little wobbly.
They've been keeping a close watch on me since then, and, other than being slightly unsteady with my hind legs I'm feeling fine.  For some reason I've also been more cuddly than ever, and have changed, albeit only slightly, my sleeping habits and positions.
Hopefully this all means absolutely nothing.  I am old, after all, and shit happens.  Yesterday mom just freaked unnecessarily, and I heard dad tell her he choked up a little when she called him to say I didn't seem right.  What a sissy! I know they'll keep an eye on me, but they have nothing to worry about.
Posted by Cleo's Dad at 9:58 AM 11 comments:

Mom and dad took advantage of the great weather to explore Fort Fremont Preserve, an old fort built in 1899, parts of which still stand.
The fort is built into a hillside overlooking the Beaufort River, and has a great stretch of beach which was nice and quiet. 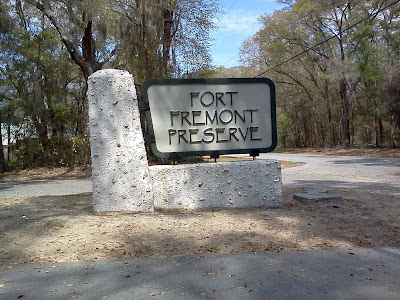 The preserve is
located at Land's
End on St. Helena Island, a mere half hour or so from here, and they made a day 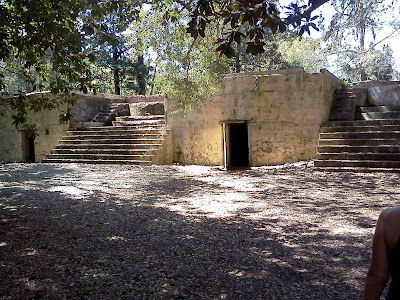 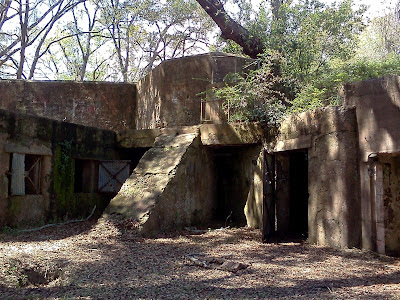 of it, soaking up some early morning sun, picnicking on the beach, and then spending the rest of the afternoon exploring the ruins. 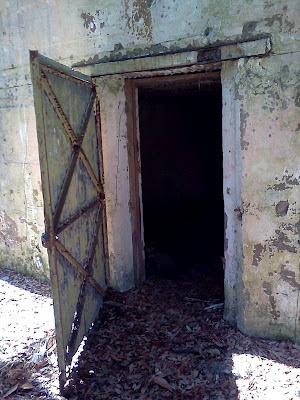 There are all sorts of doorways that lead through a maze of rooms and little compartments, and some of the doors actually still work. 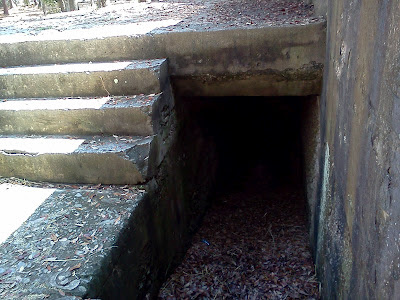 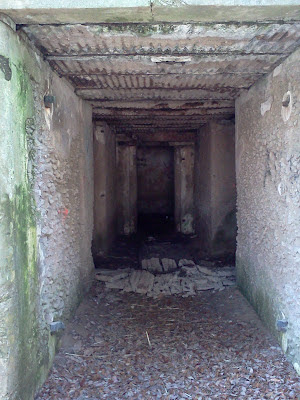 The place is open to the public, but you wander at your own risk.  As you can see, there are sections where the corrugated ceiling has rotted, causing the concrete overhead to fall.  Mom and dad forgot to bring a flashlight with them, but I heard them 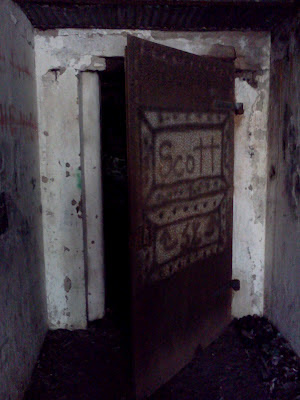 talking about going back today to check out more of the dark sections they couldn't see into.


Better them than me! 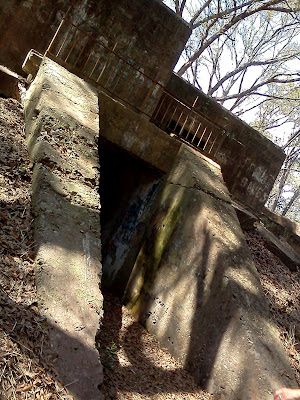 The site is pretty well preserved, but it's unfortunate that people feel the need to deface such places with graffiti the way they have here. 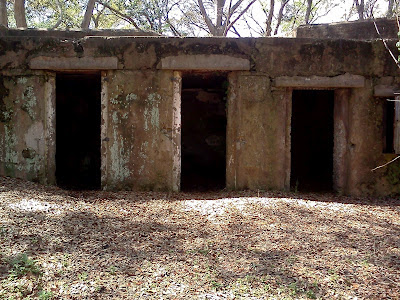 The happy wanderers got back late in the day, toting a movie, a six pack, and a slight sunburn, and spent the rest of this beautiful day relaxing.  Like they worked hard or something!
Posted by Cleo's Dad at 6:19 AM 4 comments: 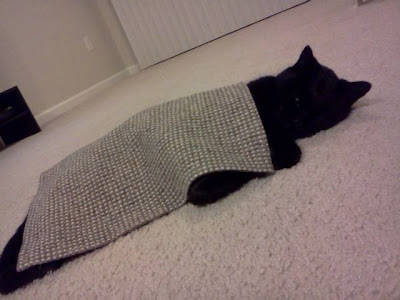 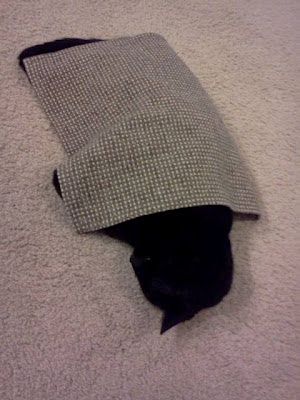 So the other night we're all watching t.v. and I'd had enough of dad's lap.  I hopped down and picked a good spot on the floor  in front of mom and dad, and it wasn't long before I was dozing off.  Well, apparently mom thought it would be funny to toss the thing from the back of the chair (I don't know what the hell it's called) onto me.  They do this occasionally, with tissues, napkins- whatever they 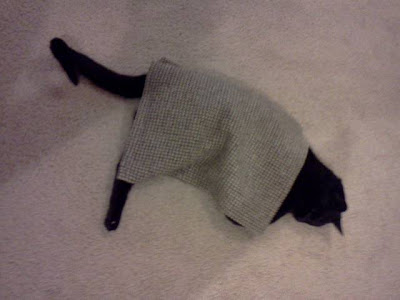 have at that given time that won't hurt me.  Apparently they think I'm here purely for their entertainment.  Anyway, she 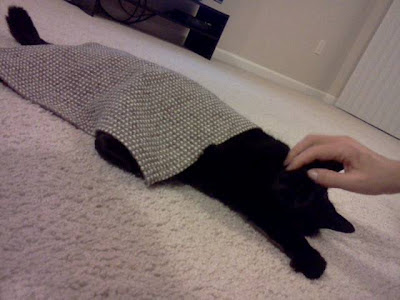 tossed that thing at me, and it kind of floated down and covered me like a blanket.  I thought she was being kind and sweet and loving, 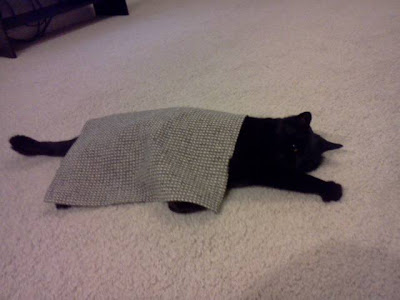 wanting me to be covered up nice and warm, so that's what I made them think, and I just laid there under that thing, all nice and warm and  cozy.  I put on a good show for them, relishing the oohs and ahhs and all sorts of "cute kitty" comments. 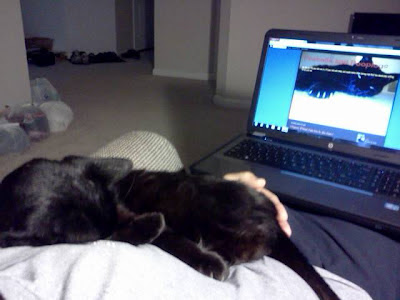 Okay, I'm going to expose a little lie here.   Since cats don't have fingers it's really difficult for us to type, so I thought I'd show how I'm able to pull off writing this blog.  As independent as I am I need dad's help to write this thing, and this is how we do it.  I climb up onto his lap and cover my eyes, and in a matter of minutes I'm sound asleep.

My thoughts slowly begin trickling out of my head and get absorbed by dad's belly, where they get transformed into words that flow through his fingers (even though, at this particular moment his left hand has to support my butt and his right the camera).

Just kidding.  I actually do my own writing.  This picture represents a typical early morning battle that I ordinarily lose, only this time I got my way.  I don't like sharing dad's lap with the computer, and he usually shoves me off when I try to sit with him, but he gave in, slid the thing down towards his knees and made room for me.  Do I call the shots here or what?!
Posted by Cleo's Dad at 6:10 AM 8 comments: 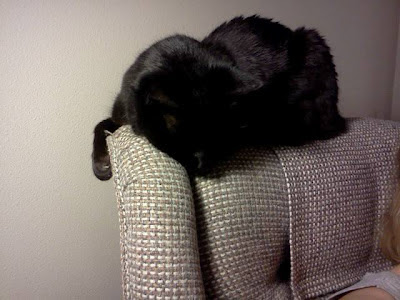 This is my imitation of dad.  I know it's hard to tell, but I fell asleep up here over mom's shoulder last night.  Dad falls asleep in his chair all the time, so I can too.  I was actually mad that mom wouldn't let me in her lap.  Usually when that happens I just climb up here and wait for my chance, but this time I guess I was a little too comfortable and just dozed off.  Poor woman- now she's got two old guys that fall asleep on her.  She's gonna get a complex.
Posted by Cleo's Dad at 6:39 AM 11 comments: 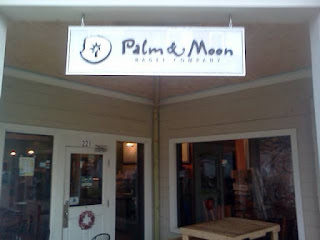 Mom and dad left the other morning to visit their newest favorite bagel spot.  It's right in downtown Beaufort, and they say that the Palm & Moon has the best bagels around.  They don't go out for breakfast often, but when they do they favor this place. 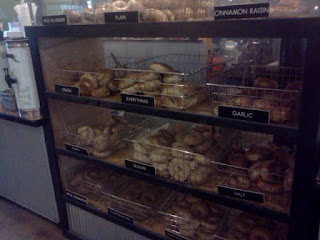 The bagel selection and the variety of cream cheeses is incredible.  They have breakfast sandwiches and monster muffins, too, but mom and dad go for the bagels.  Usually, they'll stop on the way so mom can get her extra large fountain Diet Coke, her lifeblood, but dad gets a hot coffee with his bagel. 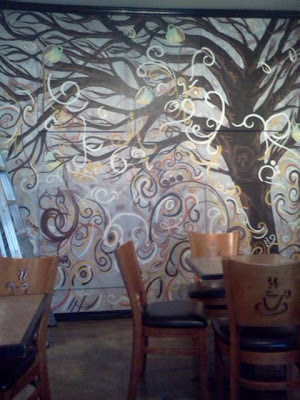 Besides the tasty array of flavors like garlic herb, maple walnut, spinach & artichoke, and veggie, dad says they offer lox cream cheese, and he'll probably try that next time.  I hope he'll bring some of that home for me!
This mural over here takes up one whole wall in the cafe, and is really cool.   If you ever find yourself in Beaufort make sure to stop by here for breakfast! 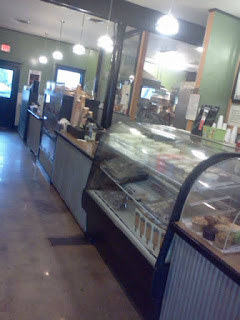 This is not a paid endorsement.  These two just know when they find a good thing, especially when it's a nice warm bagel, crispy and crusty on the outside and chewy and moist on the inside and smothered with zesty cream cheese...  Okay, time for breakfast!

The house in which I spent part of my youth now sits, as it has over many winters under a blanket of snow, which continues its vicious assault on parts of good old New England.
Watching the weather up in that neck of the woods got me reminiscing about those days, one of the last times I was an indoor/outdoor cat. There were three of four of us then, and we'd come and go as we pleased (actually, we had to be let in and out at their whim), sometimes disappearing for days at a time.
We shared the old homestead with a couple of dogs as well, who were also indoor/outdoor.  Unfortunately for them the outdoor portion of their lives had to be spent in a fenced-in area just off the rear of the eight-stall barn that took up the better portion of the back yard.
I watch the weather radar now and remember how dad was always afraid of the barn roof collapsing.  The barn was in rough shape, he'd always said, and for the years we lived there he'd always intended to shore up the sagging roof.
The barn survived our ownership, roof intact, but the year after we sold the place a good, heavy wet snow saw to it that the structure wouldn't survive another winter, and down it went.


As with everywhere I've lived we had the run of the place.  The kids each had their own bedroom, and the gently sloping ancient hardwood dining room floor opened onto one of two basement staircases that lead to the finished part of the basement, offering us plenty of space to run around and wreak havoc at night.  In those days I preferred exploring around the unfinished side of the basement, built of boulders bigger than dad and crumbling comfortably in spots.
That house always held such mystery and excitement for us, and with fifteen rooms and almost thirteen acres of fields and woods we never ran out of places to explore.  When dad and his then-wife bought the place it was painted New England red.  The rugged slate roof with intricate designs and ornate woodwork on the high trim combined to make this a Victorian classic, complete with high arched peaks stretching to the clouds.

They sure don't make them like that anymore.  One of dad's favorite places was the difficult-to-access attic, a space he remembers checking out right after we moved in.  Once he got his worklight and extension cord up there he marveled at the size of the rough-cut timbers that made up the skeleton of the house.  That attic was pretty much the only part of the house we felines didn't have access to.  I'll bet the mice and bats were plentiful up there!
The wraparound porch on the front was great for those lazy summer days, but my favorite place was the other porch that ran the length of the back of the house.  On the sunniest days we'd bask in the sun, snoozing on the wide half-wall that closed in the kitchen entrance and forgetting all our worries (Okay, we were cats.  We had no worries.). The last time dad drove up that way he was saddened to see that the new owners apparently found a sale on the ugliest sky-blue paint you'll ever see.  'nuff said.


Sometimes I miss that old place, but I sure don't miss the snow.  They can keep it up there.  Oh sure, we'll probably be dreaming about it once the humidity we keep hearing about sets in here, but that snow can still stay up north where it belongs.