The Cat Days of Summer

Since we're technically beyond the dog days of summer I can change things up a little.  Canines have their moment, but this is about cats, and that's that.
I know, I know- I'm a little slow returning.  I'm working on it.
Mom, dad and I live in a building with 8 apartments in it, and since we've been here there's been a cat hanging around the place.  I think I posted a picture or two of her a while back, taken from my front window.  Anyway, apparently she belongs to no one, and seemed to spend most of her time down at the other end of the building, where a young guy made sure she had food and water.
That guy moved out recently, so she's been kind of just hanging out on our end of the building.  Well, of course mom and dad felt bad for her, especially with some of the hot days we've been having, so mom started putting food and water out front for her.
She even went as far as giving the stray some of MY good canned food!  Now, I don't mind sharing, but I'd better not see this all the time.
So now, wouldn't you know, she's laying around right outside our front door... All The Time!
Dad held me up at the front door to get a glimpse of her, and I must say- She's quite the looker.  Those sleepy, squinting eyes, trembling whiskers and silent meows really got me going.  It was all I could do to keep from pouncing through the screen and going all Pepe Le Pew on her.  I gawked and stared for what seemed like hours, admiring her from inside, eager to get to know her. 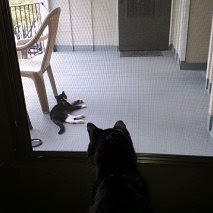 dad note: orbit looked at her from my shoulder for, as my wife would say, a nano second, then turned and wriggled to get down.  That's it.  No longer interested.

Time Flies When.., Oh, Whatever

Well it took a great deal of effort, but I finally got someone to get off his ass and help me update this thing.
Actually, it was the thunder and lightening that got him going this morning.  At three o'clock!  Poor old fart.  He's going to have a rough day, I can see it already.
Anyway, this new job he took on has been beating him senseless, and his inability to get a grip on it has mom and me pretty near at our wits' end as well, since he comes home and dumps on us just about every day.
Obviously, he hasn't been able to do much writing, or reading for that matter.  He did, however, manage to finish off "Silver Linings Playbook" (which only took him about a hundred years to read), and once he figured out that he wasn't going back to sleep this morning he decided to start "Forrest Gump", which mom picked up from the library.  Once I knew he was up to stay I convinced him, in my increasingly vocal way, to help me get a new post done.
On a different note, he's been giving me canned food more frequently.  It only took a day or so before I caught on that it would be a regular thing, and now I start with what he refers to as my incessant crying pretty much from the minute he gets out of bed until he sets the dish down on the kitchen floor.  Hey- I want what I want when I want it.  Get over it.
Apparently I'm not pooping all that well, and since I'm very old he and mom are concerned about my system not quite working the way it should.  Whatever.  I'll go if I have to, and won't if I don't, as far as I'm concerned.
Okay, I'm bored already.  And I want my food.  I'm done here.  I won't let up, and I can see the irritation boiling in his face.  Bye.