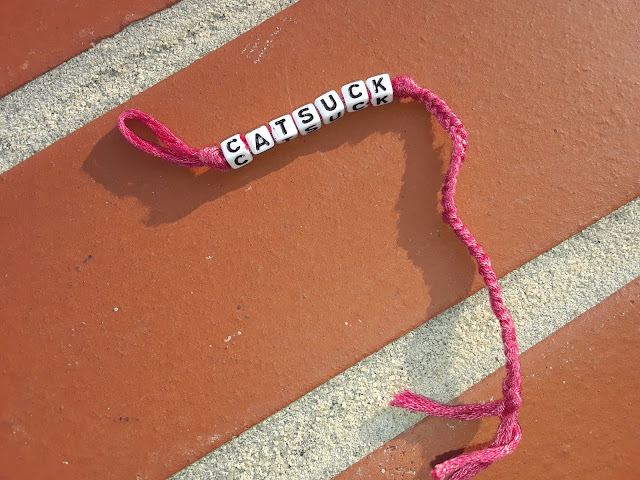 I don't even know what to say.  Dad found this on the ground at work the other day.  How DARE some human have the audacity to wear such a shameful piece of trash!
There's a Lost and Found bin in the office.  Dad did the right thing and promptly placed this in the garbage can.  I'm so disgusted I have no more words.

First off I'd like to thank Jan and everyone over at Mousebreath Magazine for publishing Cleo's interview, as well as all of you who read it and commented on it.  As if she didn't have enough attitude she now acts like she's some kind of diva.
Actually, come to think of it she's always been like that.  Anyway, I suppose I should now address the exposure of her playful addiction that she let on about during her interview.
Cleo's developed a handful of habits since she's been with us, and most often it's so funny to watch how she behaves in certain ways repeatedly.  Early on we had a small piece of carpet laying on the kitchen floor, and after sniffing it out initially Cleo just began her claw sharpening routine on that mat and has used it for scratching since then.
That is now her mat and it's been against one wall in our living room since then.  We've (almost) never had a problem with her clawing at the carpeting throughout the apartment since she somehow instinctively knows to scratch only on that mat.
As mentioned in older posts that's where we keep her assorted toys, and that is now also her home base of sorts.  An earlier play habit involved one of her fuzzy, jingly balls and a few butt spankings, which charged her into a playful frenzy.
Switching her gaze back and forth between the ball in my hand and the wall above her she'd wait with unbridled anticipation for me to toss the ball off the wall where it would bounce and fly across the room.  Now and then she'd run and plop down on the ball, but most times she'd pounce on it, then immediately run back to her mat and await the next spank and toss.
The old girl can get bored easily, and this play morphed into her current obsession.  She's enjoyed her brief spankings for a while now, but lately it's taken a turn.  I'll slap her hind quarters (not too hard, of course), pat her back a few times running a hand down the length of her tail, then get up and walk away, and she'll turn and lunge in my direction, letting out a growly cry and even taking a swipe at me as if to say "Hey, get back here!".
As soon as I stop and face her she turns and runs right back to the mat, flattening herself down in anticipation of her next spanking.  We've captured her routine on video, but the quality's not spectacular, so we'll try again later.

Cleo has been such a joyful addition to our home, and we've even gotten used to her often intense attitude common to her ilk.  As I tap out this post she's right here on the floor next to the chair, snoozing away.  During the winter months she chooses our laps, but while it's warmer the floor's her favorite spot.
Being Saturday I was supposed to try to sleep in this morning, but I woke at 4:50 to her sloth-like habit of walking from one side of the bed to the other in super slow motion, cooing like a pigeon.  She'll sit with her face right up to ours, and if mom doesn't wake she'll come around to my side and do the same, repeating this until one of us gets out of bed.  Sometimes she'll want fresh food, and sometimes she just thinks it's time to get up.  I wanted to catch up on some much needed sleep, but I'm okay with the quiet morning time with Cleo, even if she's just laying here by my side.  I'm glad at least she's sleeping.  Yeah...

Lacking creativity this morning (this week, actually) dad's decided simply to share our morning vibe today.  He and I are the only ones up at this hour every day, unless mom's had a restless night of sleep.
You know, for someone who delights in reminding me my brain's the size of a walnut you'd think he'd be able to come up with something a little more dazzling.  Have a wonderful weekend y'all.

As happens often, the large bespectacled one is getting scatterbrained and letting work- especially just back from vacation- wrinkle his brain and interfere with his "scheduled" blog time (come on dad, we all know you're not that organized).  He's been poring over his pictures folder titled "Cleo", of course, trying to determine which he's used for my posts and which he hasn't yet.
Now, I could tell him there are very simple ways of categorizing his pictures, but I know how well he listens (mom says "Can I get an Amen?!).  We'll just let him do what he's gonna do and not waste our breath.
So anyway, these were from a while ago, as mom would never have the afghan on the bed with the recent high temperatures (dad says "Oh yes she would!).  Okay, this is going in a direction it wasn't supposed to, so I'll just post the photos and be done with it for this week.
Obviously, someone's not in a place to work on a quality blog post with me, as if there are other, more important things in life!  In addition, Mr. Frazzlepants is dead tired because he didn't sleep well.  He woke during the night to mom hurling expletives at a human-sized roach in the corner (please bear in mind- mom's a meticulous cleaner and keeps our apartment nearly spotless, so I'm assuming the beast was looking for drier ground due to all this crazy heavy rain we've been getting).  The pest put up a fierce battle, but alas it was for naught as Dad the Conqueror snuffed its life with a Croc and a flush.
Okay, now that we've thoroughly gone off-track, here are the photos.  I'm not even sure what I was going to say with them at this point.  I gotta go eat, and I'm gonna try to convince Brian the Barbarian to close his eyes for a few before getting ready for work.  Bye.