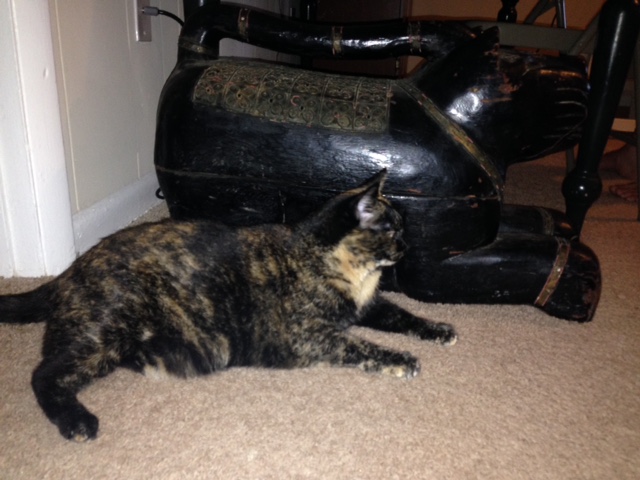 Dad found it amusing that I chose this spot and this position one day recently for a respite from my hectic daily schedule (really, Cleo?)
Some of you may remember this cat sarcophagus from Orbit posts from oh so long ago.  It's one of a few pieces from dad's eclectic collection of oddities (translated: a bunch of shit for which he had multiple excuses not to get rid of) that he would not part with way back when mom helped liberate dad from his inherited hording tendencies (so I liked to collect stuff).
Maybe I was just tired.  Maybe I was silently communing with Orbit and dear little Grayson, whose ashes rest within this hand-carved ten ton feline showpiece.

So with everything that's going on in the news these days it's gotten harder to keep the time set aside for things like posting here.  I've been instructed to write this so someone has an excuse for not posting anything for a bit.  Dad's usual reading & writing time has been reduced to a fraction of what it used to be because it's so easy to get caught up in the headlines.
Sure, he still finishes novels he and mom get from the library, but now a good chunk of his morning reading time is spent on the headlines, and before he knows it his morning's shot and it's time to get ready for work.
He pours his coffee, grabs the laptop and his phone, and immediately gets sucked into the news and self-set notifications on his damn phone.
My lap time with dad, when I choose to bless him with my presence, has taken a back seat, mostly because there just isn't enough room for the laptop and my... bulk (had to put that in there, huh dad?)
Will things ever calm down?  Will all the horrible, unbelievable, questionable ridiculous things we're seeing and hearing every day now ever subside? It's easy to get worked up about all the bullsh*t right now, so I'll leave it at that. 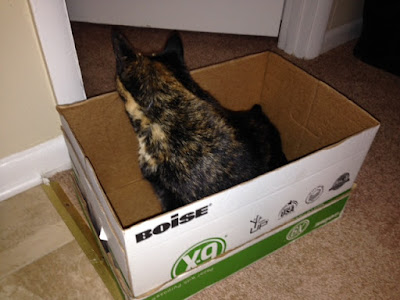 Anyway, as much as I'm a mature lady I still have a fun, curious, playful side.  Like many of my ilk I like boxes. 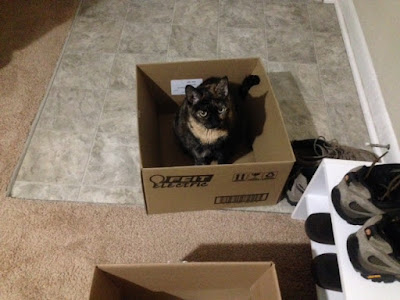 I love it when dad brings home boxes.  Often, mom needs boxes for packing gifts for the grandkids, putting away seasonal clothes and whatnot, and the minute dad sets the boxes down I can't resist hopping in (yes, I can actually hop.  You should see me jump from chair to chair!). 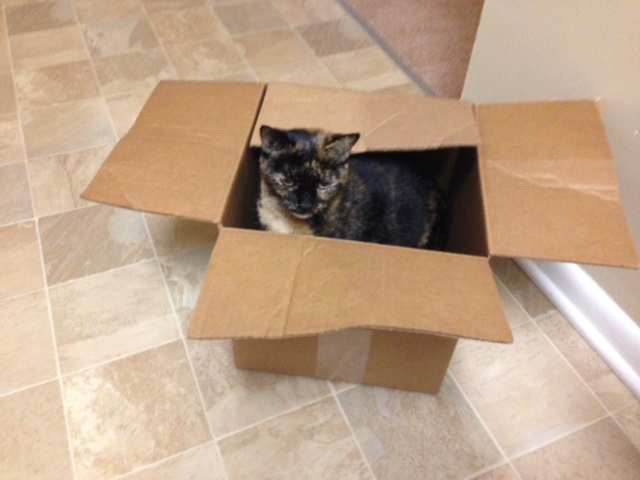 Boxes fascinate me.  I sniff every corner, every flap, rub my face on them, and jump right in, where I sit for, oh, about a minute.
And then I'm no longer interested.
Posted by Cleo at 4:34 AM 18 comments: 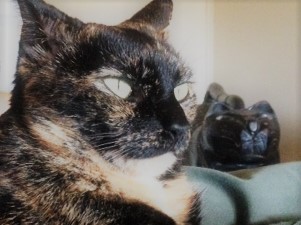 Me on mom's lap with the cat-sophagus in the background.
Posted by Cleo at 7:52 AM 14 comments: