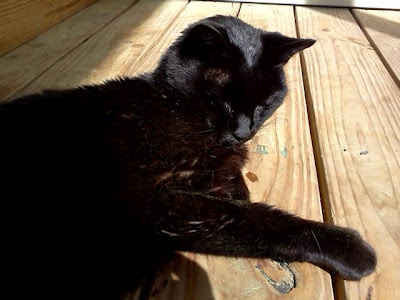 I like to sleep.  Plain and simple.  Statistics show that cats sleep anywhere from thirteen to twenty hours each day, and I can certain- 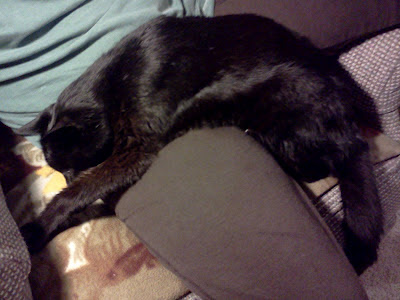 ly say I do my part to support those findings.  Out on the deck, as I've shown you before, is one of my newest places to snooze, and we 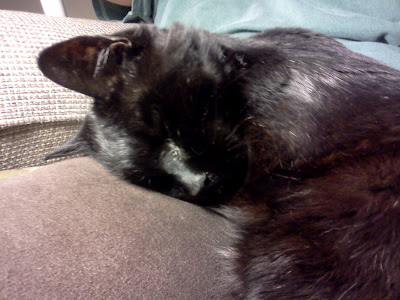 already know how much I love a good lap.  Mom says she can tell when I'm in a deep, deep sleep.  She says she can feel my full re- 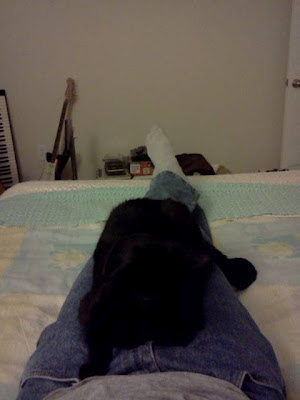 laxed weight, as opposed to when I'm simply napping.  Dad says he judges the depth of my slumber by the size of my drool spot.  If I had to pick a favorite, it would have to be their laps, paws down. 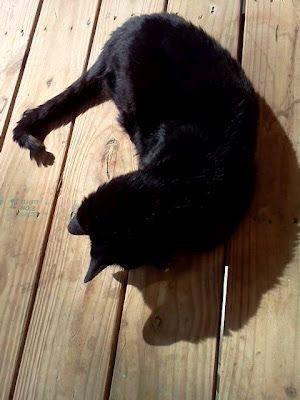 The other day I was out on the deck, trying to snooze, and something below caught my attention.  We are on the second floor, and I can see right through the boards.  The downstairs neighbors have a dog, and they occasionally let it out on their deck.  What a great, safe view I have from up here!
Posted by Cleo at 6:00 AM

How purrfect! You can spy on that woofie and he is none the wiser! HaHaMeow! We luf it!

There is no better thing as a good snooze :)

YIKES! A woofy would wake us up, too! We're surprised you're not puffed.

What a great spying spot you have there, Orbit!

It's good you can stay safe from him, Orbit!

Awww sleepy kitty! So sweet :o)
Luckily you were safe from that scary dog though! ;o)

Great spot to torment the dog from. Mom has 2 dogs. I just love messing with them.But I think they enjoy it too.My favorite spot to nap is mom chest. Have a great nap.