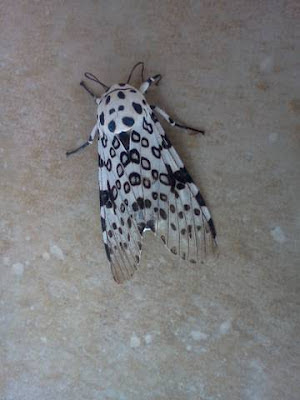 As interminably lame-brained as dad can be he does recognize beauty when he sees it (he married mom, didn't he?) (you owe me, big guy).  Oh- on that note, this past Friday was mom and dad's first anniversary!
Anyway, He found this black and white spotted leopard moth hanging out on the sidewalk when he went to work the other day. Amazing artwork, isn't it?
Posted by Cleo at 6:16 AM

Oh lovely Orbit! I think I read this one before? I remember the fabulous compliment for mum! And this moth is too adorable! yay!

The moth is beautiful!!! Happy anniversary to your folks :-)

What a pretty moth! My mom gets all excited to see pretty bugs; we just like to eat them. Usually.

Oh, and happy anniversary to your mom and dad!

That Mot was very botiful !
Have never seen anything like that before.

Happy Anniversary to your peeps! Hey, Mothra is beautiful!

Concats to the 'rents! Holy cod, we haf nefur seen a moth colored like that. Pawsome!

The Meezers or Billy said...

we think it looks tasty. the mom thinks it looks yucky. happy annifursary!

Happy Anniversary to your mom and dad Orbit. The Shepherd & I celebrated our 18th anniversary with a cold (him) and a tumble (me) - it's heck getting old - but I guess the minister did say in sickness and in health.

Glad things are going well at the Old/new job. It's nice to be back in familiar surroundings - enjoy yourselves! T.

Happy Anniversary. Orbit I am surprised Dad got a picture of the moth before you eat it. All three of my cats would of enjoyed it as a afternoon snack.