Well, here we are.  The end of one year, almost the beginning of the next.  This will be, lets see... somewhere around my twentieth or twenty-first year of existence on this planet (the old guy who, together with mom waits on me hand and foot, my companion for all but a few of those in between), and I'm thankful for the chance to live and be as healthy as I've been for this long.
Though I won't admit it out loud I'm grateful for the brief time I got to spend with that little tyke, Grayson.  I'll quietly admit he wasn't really that annoying.
I've seen and heard a lot in my twenty-whatever-the-hell years here, and I'll be grateful for however many more I'm granted. I've learned to live with less, learned to slow down some (although I can't really imagine I ever did anything at a pace different than that of my current way) and breath deep and enjoy what I have.
In the approaching new year I hold out great hope;  for the discovery of cures for diseases and pain that have caused suffering and death for too long; for more people to take a good, hard look at the way they live, what they have and what they really need; for loves lost and faltered relationships rekindled.
I have high hopes that a child I know of will change the way she feels enough to contact the parent she mistakenly believes doesn't know or love her.
I hope that the great (and some not so great) minds in Washington can get their shit together and come up with a solution to the looming mess we'll all have to pay for.
I long to see a family I know (several, actually) learn to be more forgiving and come to the realization some day that life is way too short to be so selfish (good luck on THAT one).
I hope a bulldozing canine I know someday realizes that bullying is neither effective nor attractive, and that such corrosive behavior can haunt like a rolled newspaper if left unchecked.
I hope dad will be able to adjust his daily schedule so that he can sleep past 5 a.m. and stay awake at least a little later than six-thirty in the evening.
I hope mom will learn to give up her dependence on Diet Coke. She's working on it.  Really.
I hope a cure will be discovered for a most common ailment- that of obsessive feline grooming- and its less than pleasant after effects.
In short (who am I kidding already?) I hold out lots of hopes- some beyond reach, I'm sure.
So anyway, Happy New Year.  I'm being forced to put this ridiculous f*cking picture in here for your amusement.  Certainly not mine.  Mom went and dressed me up for a card and made it look like I partied too much.  Whatever. May the coming year be good to you all... 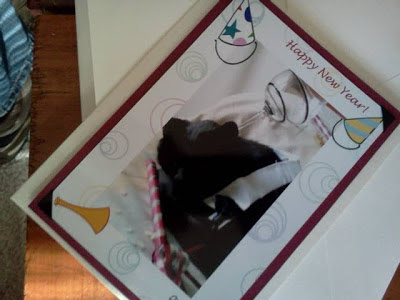 Awwww lovely Orbit!! You are so amazing!! We have everything crossed for all your hopes for this new year! Our hope is that you continue to be as you are! Yay! Happy happy New Year!! take care
x

LOVELY post Orbit !
Me hope ALL your hopes for the new year will come true !
Wish you and your peeps a HAPPY NEW 2013 :)

Awww.... I hope that ALL your wishes and dreams for 2013 come true. But first things first... no more embarrassing pictures, huh? purrs

Happy New Year, Orbit! We hold out lots of hopes for the new year, too. But if not for hope, what do we have? Not pee-diddly. We think your card is lovely. XOXOXO

20 something years? You are blessed my furiend, truly blessed! Hope all of your wishes for the New Year come true!

Lovely post, Orbit. We didn't realize you had that many years under your paws. Lookin' good! Here's to many more filled with good health, lap time and head skritches.

Well, you are a Cat, Orbit--aim high in your wishes! We hope this year brings you continued health and happiness.

Happy Mew Year from all of us at The Katnip Lounge!

Happy New Year! Hoping that you get some of your hopes at least 'cause we all thinks they're good ones. Purrs...

Aw, I bet you really *did* party too much and just got caught! Very nice year end post, Orbit. I hope they all come true for you.

Happy New Year, bud. And to your dad and mom, too. NY's Day calls for a trip to Wrightsville Beach!

We hopes 2013 sees all your wishes come true!

Have a great New Year!