This is me and dad, hard at work on a future masterpiece.  Notice how I tell his hand which keys to strike.  Notice, too, them damn sexy shiny blue shorts. And if I'm not mistaken-and for all his annoying teasing about my allegedly immense midsection- one can't help noticing that protruding little ridge of forested spare tire peeking out from the bottom of this picture.  Ha ha, gotcha Mr. Man-of-a-Thousand-Nicknames-for-Poor-Innocent-Plus-Size-Kitty! 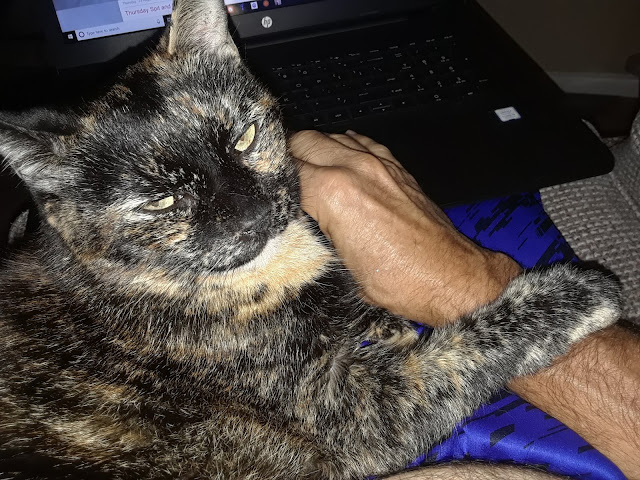 MOL MOL MOL forested spare tire. Oh Cleo that was a classic you must copyright that phrase!!! Love it
Revenge is comes to those who wait
Hugs madi your bfff

Way to go Cleo, you nailed it!

Good one Cleo, you are funny :)

What goes around comes around, right?

Cleo, you sure can dish it out! But can the human take it?

CLEO! PERFECT depiction/description of that forested spare tire just barely making it's way into view! MY brother, the other favorite one calls ME a POT ROAST! And a PYRAMID! HE has such an object he carries just above HIS shorts too! I only wish I had thought to describe HIS as such! They love saying things about us! XXXXX

pee ess, Cleo. You made our day here.

You got him back good, Cleo!

That will teach him to mess with you. Well played.

Have a purrfect day. My best to your peeps. ♥

I love that photo!

Cleo, it's time for you two to call it quits on all of that, doncha think? Ya know, the pot calling the kettle black, yadda yadda yadda. Just love each other as you are...

Pudgy humans should hesitate to comment about "well-midsectioned" cats!

Too funny. I can't talk. Before going out I like to put on a pretty corset! Be well, my dears.

You really are too funny Cleo. We didn't even notice the spare tire until you say something. Looks like you are a wonderful help when on the computer. Thanks for sharing the lovely photo. Have a great upcoming weekend.
World of Animals

I think it's funny that you cropped the photo just shy of excluding your Dad's little extra bit of "floof".