Well, they made it back, and found me almost a pound heavier than when they left!  I guess I was pretty well cared for while mom and dad were gone, and I think they're officially onto me.
You see, they've had this sneaking suspicion that they've gone overboard, spoiling me once they get a hint that I may not like a particular food.
I'm supposed to eat only a specific kind, because of my kidney issues, and I usually take a bite or two and that's it.
The stuff I ate while at the hospital did me just fine for those three days, but I won't eat it at home.  They've been going out of their way to try different brands/flavors/textures, which I've learned to take advantage of, but they realized that the stuff they left for the guy who took care of me to feed me was more than sufficient, and I even gained weight!
Anyway, I'm still kicking, but I tend to wobble more lately, and I'm not doing such a great job cleaning myself up after eating.
Mom and dad had a few days of fun and relaxation while down in Myrtle Beach, but this post is about me, not them.
I was happy when they walked in the door Saturday afternoon, and I couldn't wait to curl up on someone's lap once they got settled.  I'd kind of made a mess with my food, especially  the dry crap they make me eat, but once they got unpacked and cleaned up after me they focused on my comfort. 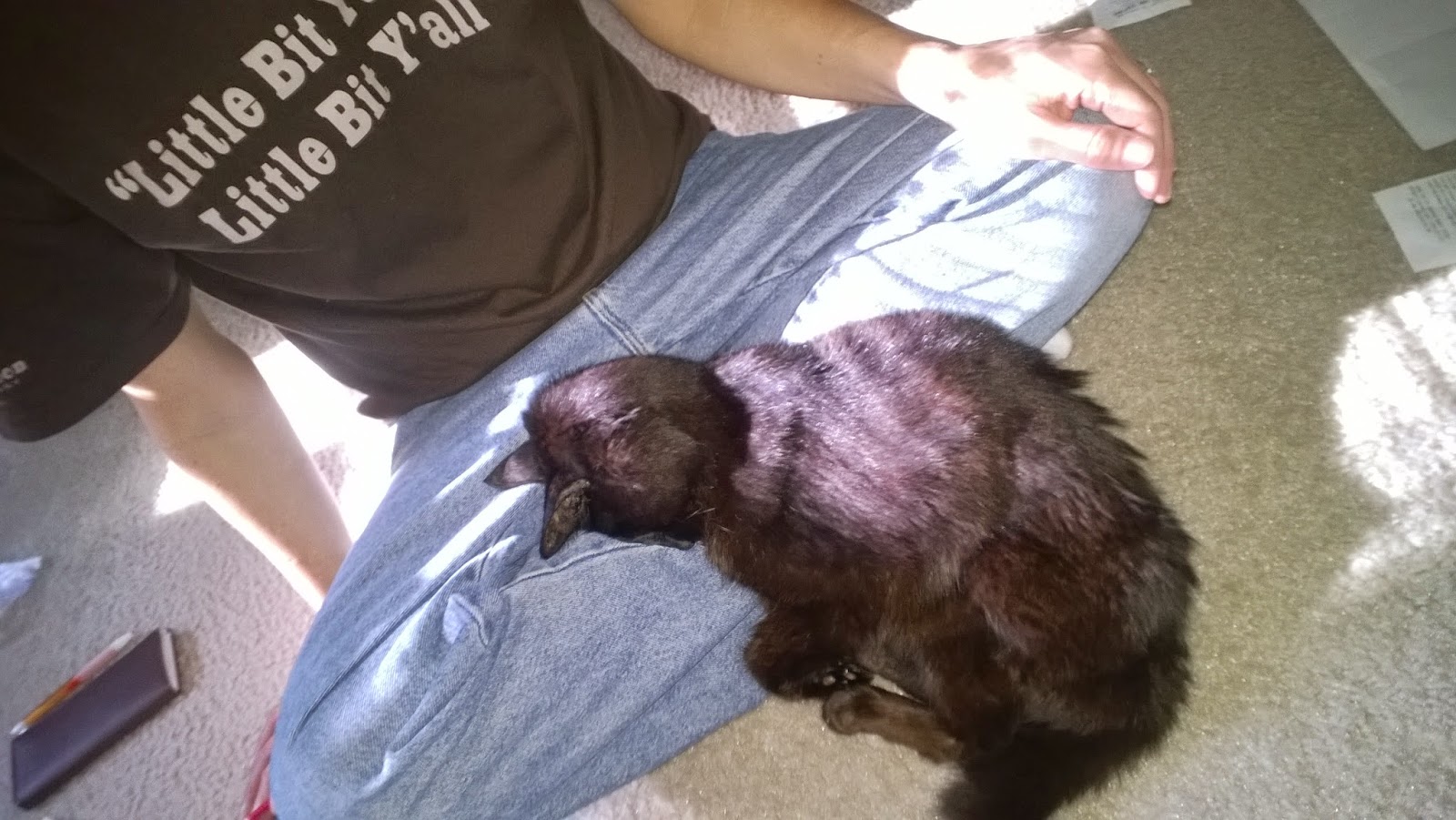 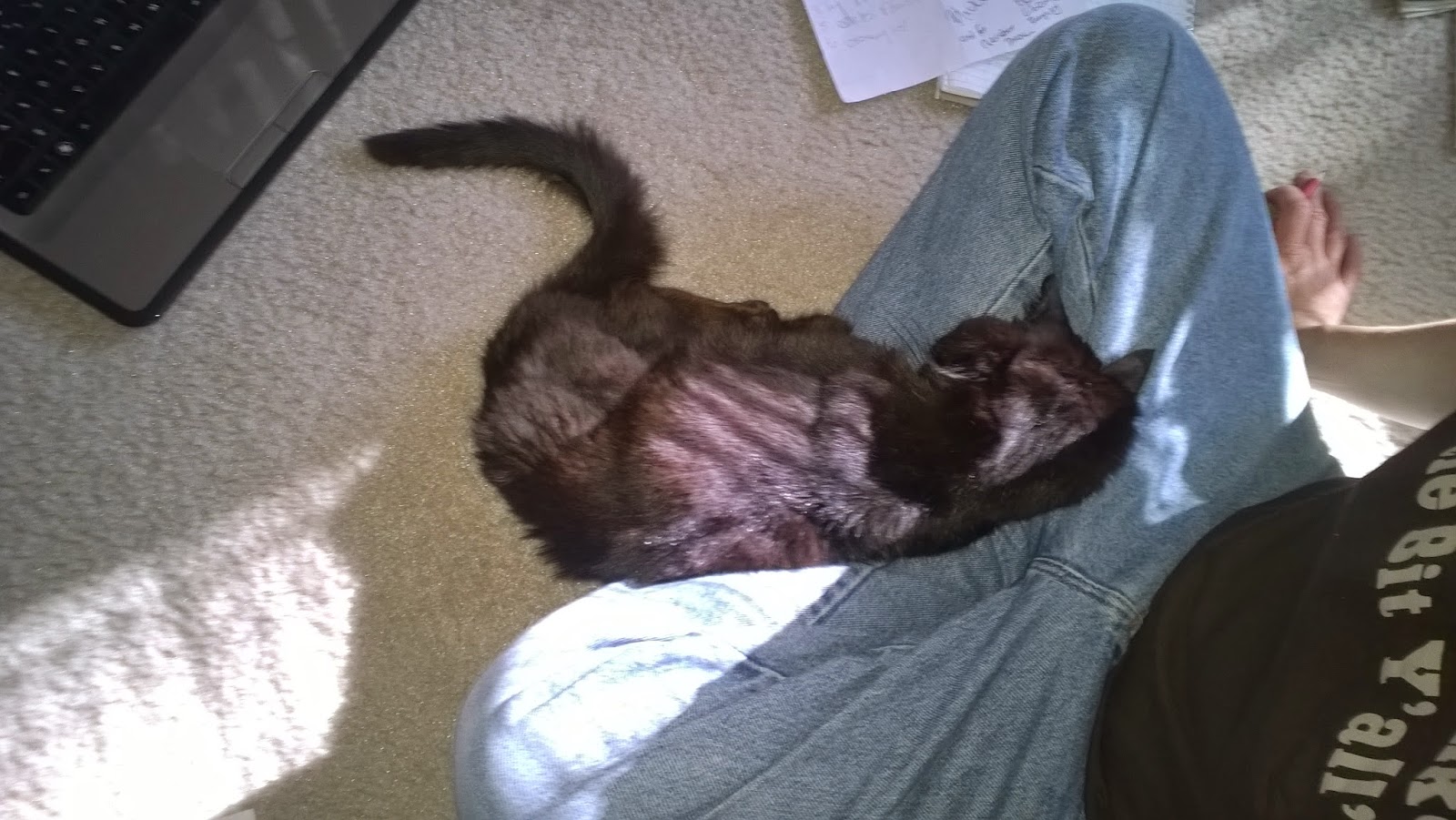 Mom had some organizational stuff to do (she's the brains that keep us running), and I just couldn't wait for her to finish, so she let me do my thing while she was working.
I got in my lap time with dad as well, but God knows you've already seen enough pictures of that.

Orbit, a whole pound! That's good news. Glad your peeps enjoyed their outing, now they can spoil you rotten...some more.

Well done dude! I won't say they should go away more often, but maybe you need to just eat all the stuffs. We know with Rilli and Monty - who both had dodgy kidneys - they were just allowed to eat whatever they wanted when we knew they were not going to recover *sob* but that made them enjoy their grub. And we then developed a taste for turkey, salmon etc.
But laps are the best!

We are glad to hear that you've put on weight! That is wonderful news.

When Jewel was going through her CRF, she refused to eat any of the kidney food, so we ended up feeding her whatever she wanted. My vet and I agreed it was better for her to EAT than to eat the kidney diet.

We hope you keep on eating well!

A pound! That is quite the accomplishment, Orbit! I really wish I could give you some of my weight, since my mom still has me on a diet. It would be a total win-win! I'll have to think about how to do that, but in the meantime, I need to nap.

Oh, and I'm glad your mom and dad had a nice time at M.B. Did they bring you anything good?

You are doing terrific on the food thing pal so please keep it up!

Wow, you did really well while the humans were away! Keep up the good work for as long as you can!

Orbit, we're so glad you did well while your peeps were away. Gaining a pound is great!

We are happy your folks enjoyed their time and you gained weight.
We think that it is important to eat any food you like . That will help you feel a bit stronger .
We purr you will feel OK for a while yet.
Purrs Georgia and Julie,
Treasure and JJ

A whole POUND! That's some serious eating, Orbit. We're glad you are doing OK, and that the peeps were able to recharge so that they can more fully serve you, MOL!

Good job on eating and packing on that pound! None of us ever liked any prescription foods so mom lets us eat normal food so that we're Happy. I hope you keep your appetite up.