Well it's about damn time!  The sun was shining, the window was open, and dad put my favorite pillow- the one with all my dried up drool spots- up on my perch.  He actually picked the pillow and this sleeping cat up off the futon as one and gently placed us on the perch.  The air felt great, though 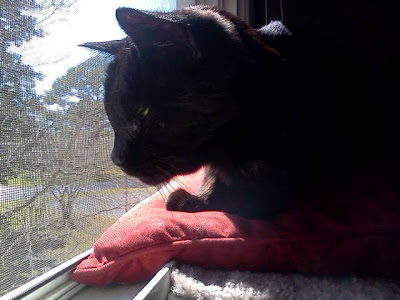 still just a little cool, and the sun was amazing.  A little later on in the afternoon the sun wasn't hitting quite the right spot, so I got down.  Much to my 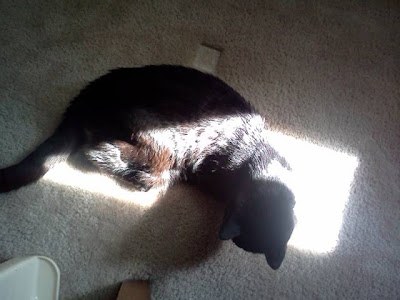 joy I did, however find a small spot of sun on the floor just behind the futon.  Being the sole reason for their existence I managed to get mom and dad to rearrange the furniture a little bit so that I could get to that sun spot.  You can see the square imprint from one of the futon legs by my back.
What these two won't do for me!
Posted by Cleo's Dad at 5:42 AM

Awwww it's because you are the Grand Vizier Orbit!! You need your comfort and your sun-puddle and have trained your pawrents well! Yay for you! Take care
x

Have a nice week.

Your humans are very well-trained, Orbit!

They should have been catering to you all along!

Nice service. You have them well-trained.