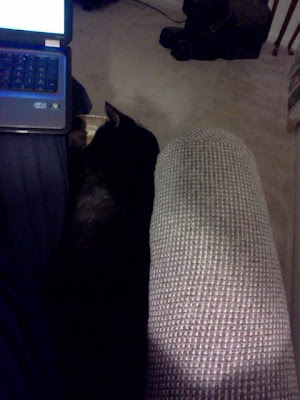 So this is where I usually end up on my mornings with dad.  He's up early every day, getting some writing done checking his emails, browsing writing websites, watching the weather, amusing himself with Craigslist's "Rants and Raves".  The day most often starts out with 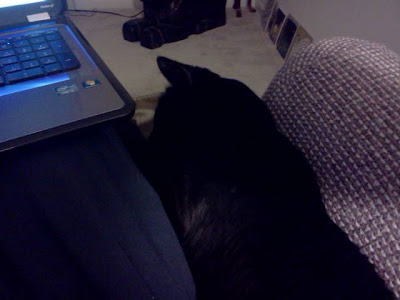 me on his lap while he reads for an hour or so, then he slides me off to the side and fires up the laptop for the previously mentioned activities. 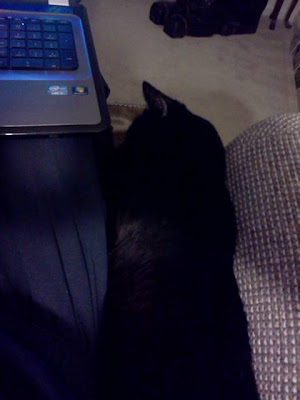 Sure, I put up a stink, letting him know what an A-hole he is for stuffing me off to the side, but what I don't let on is that it's actually quite comfortable.  The warmth is what I live for, and the tight space is pleasantly cocoon-like.  Within minutes I'm off in lala land, snoring away, a string of drool connecting my mouth to the chair cushion.

I think it look´s very comfy , but as you say you should never admit that so the humans hear it :)

Wonderful Orbit! You are too good with dad! LOL!

What a great life you live, but don't let the human know. You have to make them feel as if you are not content so they do everything they can to make you HAPPY! Stay warm and snuggly! Purrs and hugs from the kitties at The Cat on My Head, Lily Olivia, Mauricio, Misty May, Giulietta, Fiona, Astrid, Lisbeth and Calista Josette

You look totally comfy to me!

You don't look like you're bothered at all by being squished. :-) In fact, we bet it's quite cosy in that little space!

I bet your dad added that bit about drool at the last minute, Orbit. Everybody knows that's a human or dog thing.

I lubs to sit next to my mom like that too. It is so warm and cozy, but don't tell her that, MOL!