The Old Girl and the Bench

Dad here- first off, let me apologize for the poor focus of these photos.  It's hard to capture the old girl being still, so yeah, that's my excuse.
I know we've posted photos before of the Queen Bee on this bench, but that was a while ago. 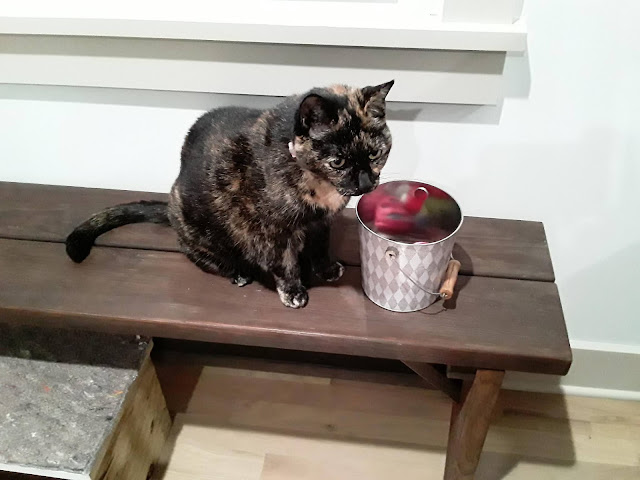 Since then- and especially over the past few months- we've had some concerns about her ability to climb, jump, etc. due to arthritis issues. She had a noticeable limp for some time, but her medication seems to be helping, and her limp is all but gone.  Between the various blocks, steps and ramps I've tried to fashion with my rough carpentry skills she's been able to get to most places easily enough with her ailing antique joints and all. She'd previously been able to jump up onto this bench with ease, but it had been quite a while since she even attempted it.  We've always tried to watch to make sure she doesn't jump, but she hasn't even shown interest in it.  Until the other night. We were sitting at the kitchen island and out of the corner of my eye I spotted large multicolored motion, and turned to see her perched on the bench behind us, just sitting there looking at us as if to say, "hey guys, whatcha doing?" 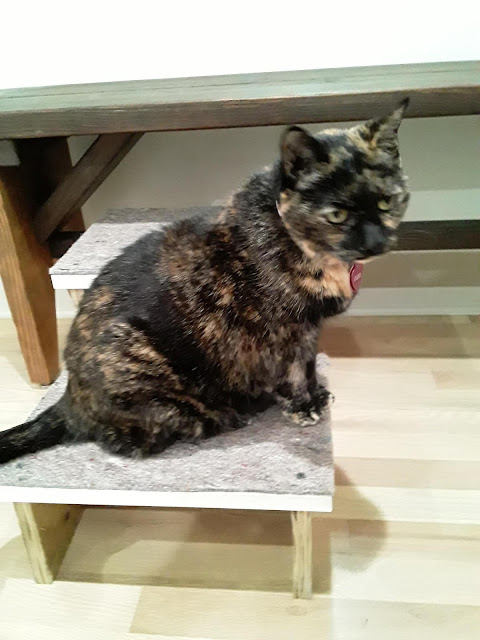 Even though we don't want her getting into habits that might aggravate her arthritis, we were happy to see her energy level returning.  I immediately ran to the basement to get the simple set of steps I'd made which we hadn't been using, and set them by the bench. 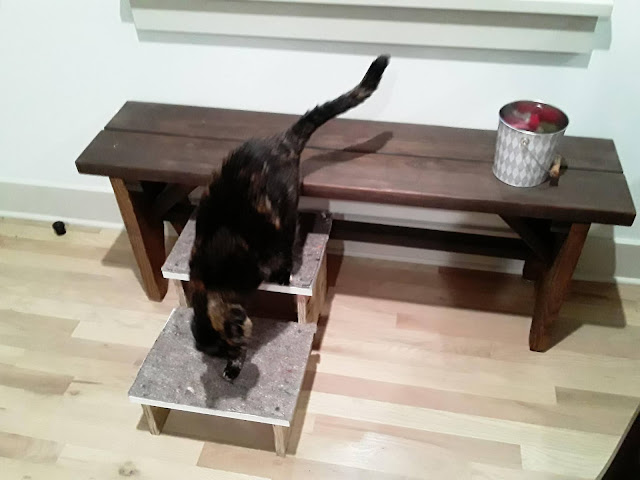 Sure enough, she stepped right down to the floor, and over the next few minutes went up and down them several times, stopping occasionally to bathe. 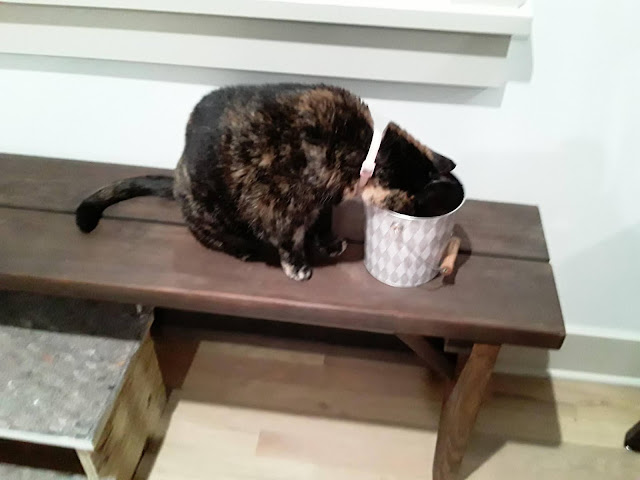 Her pail of toys was on the bench, and we caught her with her head in it once or twice, and she even showed brief renewed interest in Miss Ellen's handmande 'nip ball.

Anyway, I know this is nothing exciting to most of you, but to us it was gratifying to see Her Highness feeling better and somewhat back to her old self.  She's even gotten the zoomies these past few nights, scuttling back and forth behind the living room drapes, yowling like she's got a megaphone, her head zipping back and forth like she sees something we can't.  We know that, at 17 she'll continue to have joint, kidney and other issues, but mom and I are grateful to see her being more active again.

It's very exciting news to know that Cleo is using those new steps to get on her favorite bench. A little help from humans goes long ways and our kitties seem to appreciate it. Glad Cleo is feeling a little peppy right now.

Cleo, I think your steps are purrfect. I inherited antique steps made in 1992. I think that was before the Pilgrims landed. They belonged first to Peepers and then Seney trained on them as a kitten to the theme of Rocky. Me I use them if I feel like it and if I don't I just jump over them. Precious

That's wonderful to see! Purrs that Cleo has many more years of enjoying her bench and toys with a little help from her beans.

It is always exciting to see an older cat enjoying life and being active!
I am happy you are active and have a good appetite.
Those things are important!
Purrs, Julie

I'm going to show your steps to The Hubby; we need the same for our Sweetie.
We don't know how old she is, but having been an outside cat for at least 10 years, she's probably aged a bit faster, which includes unknown litters of kittens before we caught her.

Feeling better is a good thing. I so remember our Angel Little Bit having issues. It's good when they feel better. Good for you Cleo.

Have a purrfect day. My best to your peeps. ♥

You go girl, and don't let any human ever tell you you can't do this, that or t'other.
I am June, and I just fell off the microwave as Mom was reading me this post and I am not even 18 months old yet ... stuff happens you know! We miss align our jumps sometimes. Just remember that little engine that could ...

I'm so glad Cleo is feeling frisky enough to jump up on the bench. I have some arthritis too so I know how she feels. ~Ernie

We love these photos! Tama is beginning to get a little bit creaky and #1 has put a few steps in place here and there to help her. Of course, #1 is pretty creaky herself...

I am glad Cleo is feeling more active and able to get to places she hasn't managed for a while. I hope she doesn't proof read this post with the names and descriptions or dad is going to be in trouble!

I agree, that sweet mobility is pretty darn exciting, you go girl!

I am so happy she was interested in a toy that I made. :) Also happy she got on her bench and how clever she was to use the stairs. I have had many elderly cats so I understand the joy of seeing them do something again you though they never would.

How good to see her renewed interest - and to see all the love you have put into trying to make her comfortable !

I think it's really exciting! Binga and Boodie both had joint issues when they were Cleo's age, but they managed to get around and enjoy themselves regardless. And that's the important part.

Cleo Queen of Tortie-ness you are just beautiful and I declare your furs are aglow. You are also a genius to figure out the steps and Dad loving built for you. Angel Madi had a step stool. She too adjusted quickly to using it. Of course I had many conversations with her telling her I too had some achy parts too.
Hugs and Happy Fall in the glorious NC mountains
Cecilia

It is not fun being unable to do the things you want to do, so we are glad the steps helped make her life a little better.

It's wonderful that you've made sure Cleo can safely get up and down from some of her favorite spots. Getting old doesn't have to limit what she can dow.

It is wonderful to see that she is doing the things she loves to do! I understand your Joy! Cleo really looks like she is enjoying being able to do things again! We have her in our purrayers.

Not for nothing, but this is very exciting news, if you ask us. Thank you for loving Cleo so much, and helping her do the things she wants to do. We were thrilled when our (now angels) senior cats used the stairs we got them.

Cleo I came back by to check out your gorgeous header!!
Give the dad a high five!!
Hugs Cecilia

Charlee: "As we all know, highest cat wins. And any way up to a higher spot is legit in my book!"

Cleo, you are loved bunches and mom and dad are trying their best so you don't feel your pains and aches. My issue is vision. At least, that's it for now..when I catch up to you, I might have to have special steps and such to help me get up and around. ~ Meow!

So HAPPY to hear she is getting back to her old self and is more active. Good to know the meds are helping! So sweet that you do so much to make her more comfortable!

Good on you, Cleo. You are so loved. Our grumpy old Jezebel sends her best. ;) Though I enjoy writing in 'her' voice that way, she is actually quite enlivened by the juvenile kitties. Be well!

I'm so glad she's doing this well. ~hugs~ And those carpentry skills look quite good to me!