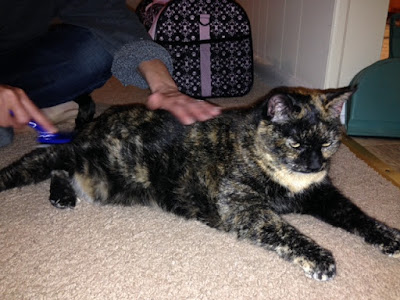 Wow, talk about a tough act to follow!  I guess that old guy was quite the presence.  But now it's about me. Hi, I'm Cleo.  I'm the most beautiful, playful, gorgeous, loving Tortie these two humans could ever be blessed with.
I've been here for about a week now, and so far I think I'm gonna like these people. According to "dad" (I guess that's his name because that's how he refers to himself) I'm a little on the heavy side.  He seems to be confused, though.  When he and "mom" came to adopt me they knew my name was Cleo, but he's called me everything from Big Girl to Two Ton Tillie to Patty McFatty. Oh, and he says I look like a big furry pear from behind when I sit.
Must be hard being perfect, huh dad?  Sucks to be outnumbered now, doesn't it? 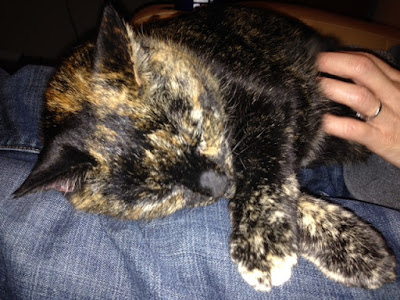 Anyway, as dad mentioned previously he and mom were out doing some errands, and they happened to drive by Orange County Animal Services here in Chapel Hill (yeah, that's right- they moved again.  And again).  To dad's complete surprise mom suggested they stop in to look at some cats.  Well, next thing you know, here I am!
I'm 13 years old, and I weigh in at about 15 pounds.  Overall I'm healthy, despite my weight.  I've overheard them talking about having to bring me to a new vet to get checked out, but besides my, umm, heft I'm sure I'll get a good report.
Mom worked wonders with dad's weight management, and I'm sure mine will be dealt with as strictly. 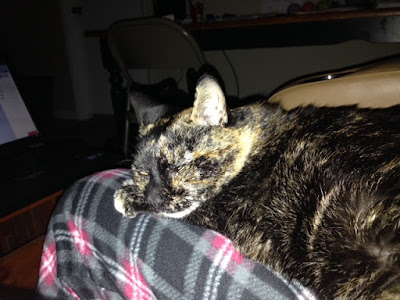 When mom and dad walked by and stopped at the glass door of my room they squatted and tapped at the glass, and I walked over to the door and started talking to them.  They came in to sit with me, and before long I had a pretty good idea I'd be going home with them.  They were extra surprised to learn that someone had already paid my adoption fee.  Isn't it amazing that there are people out there like that?  I'm so grateful that mom and dad picked me.  Dad says it's obvious I've been well loved and taken care of, and for an older mature girl I can still be pretty playful.  Well, dad says we gotta stop now.  Says no one wants to read an entire book.  There'll be more to come, including more of the gazillions of pictures they've already taken of me.  See you soon! 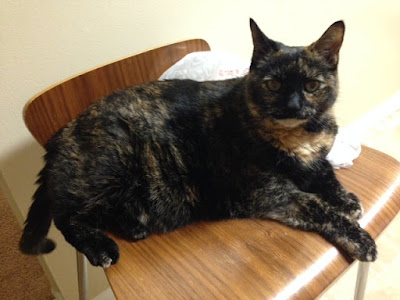 Oh Cleo!!!! Yes, you have a very tough act to follow, but somehow wethinks you are going to manage just fine. We are quaking already: a massive tortie torpedo, who manipulated her new staff into her pen as soon as she saw them... yeah, you have some talent there girl. And we bet if you have to go a, ahem, diet, you'll be yelling away in protest.

We are delighted to meet you. I shall try to be polite, but as a handsome orange mancat, I have to admit that torties are the bane of my life!

YAY!!!!!!!!!!!!! Hiya, Cleo! You are beautiful, and I know you'll whip your new dad and mom into shape in NO TIME! I am dancing up and down with joy for you and your new family; the humans were so sad for Angel Orbit, so now you will brighten up their lives, and ours too via blogsville! YAY!!!!!!!!!!!!

Cleo, you are a tortie, so you are special and beautiful no matter what you weigh. We are so pleased to meet you. Maybe you could join our Sunday Selfies blog hop this coming weekend and introduce yourself. Sending lots of love and luck in your new home. XOCK, Lily Olivia, Mauricio, Misty May, Giulietta, Angel Fiona, Astrid, Lisbeth, Calista Jo and Cooper Murphy

Welcome, Cleo! Binga says that since you are a tortie, you are already in charge of the house, and never forget that.

It is so nice to meet you Cleo! We are thrilled it all worked out just the was it was meant to be!

Well, hello, Cleo! It's so great to meet you. What a pretty girl you are.

A great BIG Blogville welcome to ya, Cleo! :)

Welcome Cleo, I am glad you got such a loving home. You are a cutie.

OMC, OMC! We wanted to comment on the previous post but our mom got stuck working and we didn't get to it, but this is so exciting that we're glad we waited for the surprise! We love torties and are so happy kismet intervened. (Mom is totally smitten, of course.) Welcome, Cleo! We bet that not only Orbit is celebrating over the Bridge, but our old bro William is also...he loved torties too.

Welcome Cleo to your new home! I am thrilled to see your photos and read a little of your story. (I might just enjoy a whole book about you!)

You are very beautiful and it is wonderful you have come to such a good home. May you enjoy each other thoroughly.

Love,
Lily with Tommy Kitty at my side

Cleo we are sure Angel Orbit steered Mom and Dad right to you and we have to give them a big YAY for adopting a, um, mature, lady cat.
All that meowed you are Beautiful! You are going to have a wonderful time with your new family and we can't wait to read your adventures!
Purrs
Timmy and Family

Cleo, you are exquisite and we are SO happy to meet you!!! We're big tortie fanatics at my house too so we can't wait to learn all about you!

Wow! I am so glad I never deleted this bloglink. I am delighted to meet you Cleo. Glad you picked your parents. They needs to be whipped back into shape. Welcome and I look forward to reading all about you