Yet Again, A Bucket 'o Meds and a Gazillion Dollars Later... 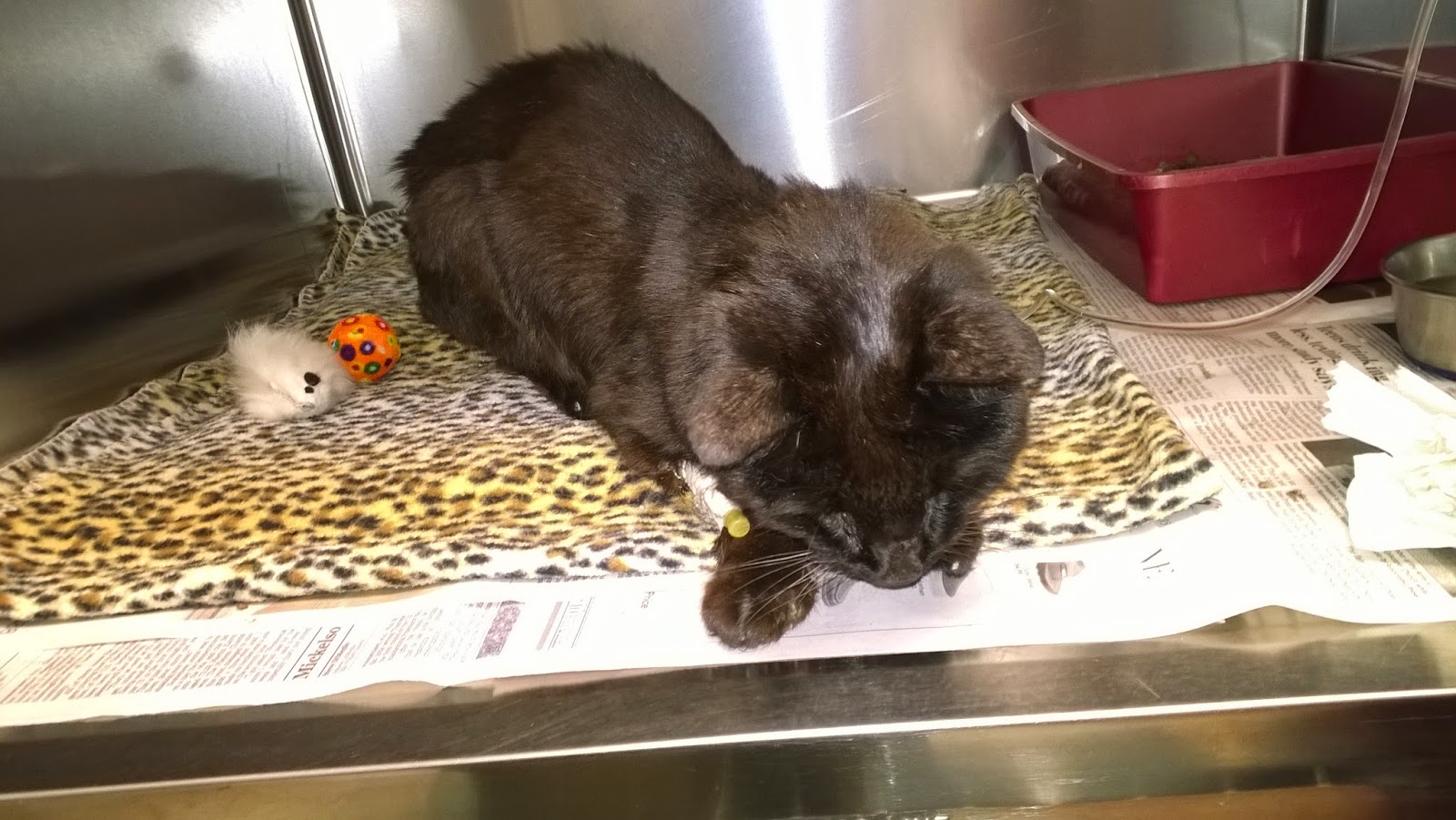 Once again, I'm back home.  Thanks for all your well wishes and comments.  I think three nights in the cage was enough.  See the toys they stuck in there with me?  Imagine that- me playing with such things. Bah!
Anyway, they told mom and dad I was doing probably about as good as I was going to, and I could begin recuperating at home.  Mom and dad were to call if things weren't working out, and last night mom typed up a schedule for the dizzying array of medications they sent me home with, most of which even I can't pronounce.
I was so glad to be back home, even though they took great care of me at the hospital.  Last night mom and dad slept out on the futon so I could sleep with them, which I haven't been able to do for a long time because of my stinky litter-tracking habit of late.  They've been keeping the bedroom door shut tight so they don't wake up surrounded by crunchy clumps and nuggets. You see, for some reason I have developed the bad habit of not covering my stuff, and when I step in it on the way out of the box it always ends up all  over the place.
The crack appetite stimulant they sent me home with has me bouncing up and down and shifting restlessly, but once that wears off I'm able to settle in and melt into their laps once again, and I did okay for my first night home.  Without skipping a beat I woke them up promptly at 4:15 this morning, yowling for food and attention.
Ahhh, it sure is good to be back home.

Welcome back home dude! They moved their sleepy time for you ? Brilliant. You rule! Keep taking the meds, and crack.

Andrea and the Celestial Kitties said...

Goodness! It must be wonderful to be back home and waking everyone at the correct time again! hope you feel better!

We sure are sending you lots of purrs pal and we know home is always the best place to be!

So glad to hear that you are back home and doing all right. We sure send many more purrs to you so that you can continue to get better. We have all our paws crossed for you too. Take care.

Sorry you had to go through all that, Orbit. You know, though, that your mom and dad only have your best interests at heart. And look at the bonus you got with the futon! Score!

Be well, my friend.

We are glad you are back home where you belong! Try not to be TOO despot-ish, although some is purrfectly fine!

I'm glad you're home, Orbit! Wow, getting old isn't for amateurs, is it?

Thanks, all! Glad to know I have so many friends pulling for me. I got to sleep with them again last night on the futon. I think I'm starting to feel better, though this medication schedule has me-and dad- shaking our heads and dizzy...

We are glad to hear you are home again. We sure hope the medications work and that you continue to heal. Those appetite meds sure make me (Carmine) hyper, too! But they do work. :)

Orbit! Hope you are feeling much, much better now...and your humans are waiting on you hand and foot! The world needs you, baby, so get 100% again soon!

dood...N just on general prince a pull, change all de clockz in de houz ta an hour earlier while mom & dad iz knot lookin....that way they iz up at 3:15 givin ya sum food...that'll teech em ta leeve ewe in lock down for 33 dayz....

Maybe try some shredded bank documents for litter? At least you are not stuck back there, horrors to that.
Purrs my furend from all of us here
Timmy and Family