Sorry, had to make a bit of fun of dad.  So Christmas Day here was a veritably joyous loungepalooza, stretching leisurely from the jaw-dropping glory of a brilliant western North Carolina sunrise-

- actually, let me back up a minute.  Dad took this next one Christmas Eve Day as he was zooming up the drive on the UTV, which didn't seem to bother them much as they just went back to grazing before loping off towards one of dad's trails.So back to the stretching leisurely thing:  Dad woke stupidly early as usual and on shuffling to his lifeblood machine to hit the brew button found my gift to him.  He relishes the addition of a little shot of "flavor" on special occasions, and me and mom knew this would do the trick on this special morning. 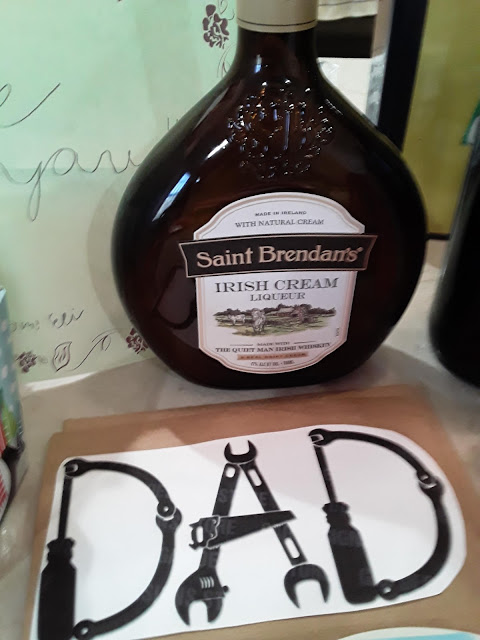 The gift-giving stretched on through the day, peppered with texts, calls and zooms with kids and grands, keeping the fireplace aglow, even though today was supposed to hit almost 70, and the occasional nibble of chocolate and a light breakfast. 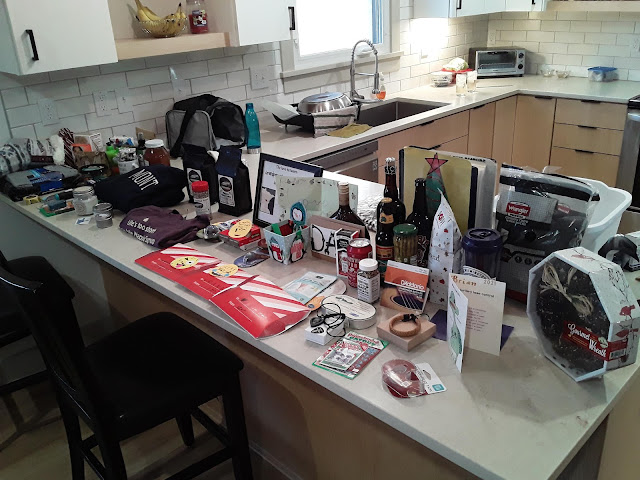 Mom laid out all the loot when all was said and done, and the overall themes became apparent; hers seemed to be a good deal about cosmetics, candles and clothes, food & beverages (mostly, anyway) for dad, and toys & treats for Yours Truly (and I'll grudgingly throw in a mention of the seed wreath there on the right end for our feathered friends from dad's work).  My Advent calendar is but a ghost of its former self, 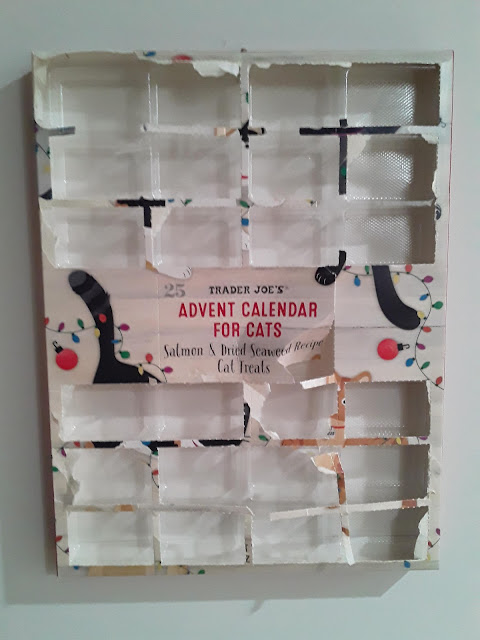 and this is a mug I got for mom.  Since I can't read (I know, I know- but I can write blog posts?) I trusted dad's assertion that it says "To the BEST Cat Mom in the World".  Dad found this compliments of Melissa & Mudpie's 2021 Holiday Gift Guide for Tortie Lovers. 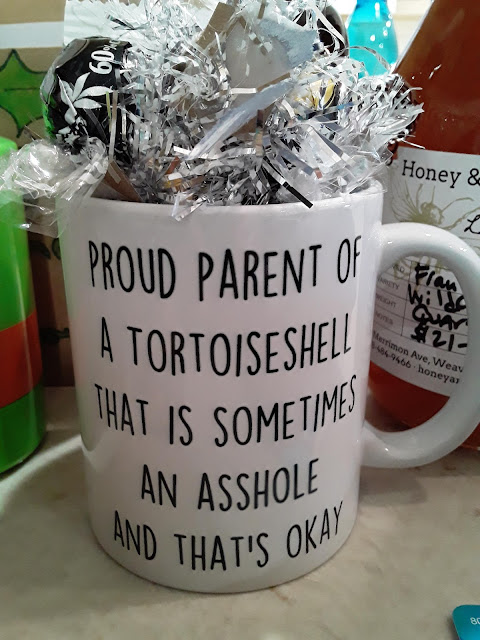 And then there's this stuff that mom got dad.  I don't know, I guess it's some kind of cologne or something.  Any guesses? 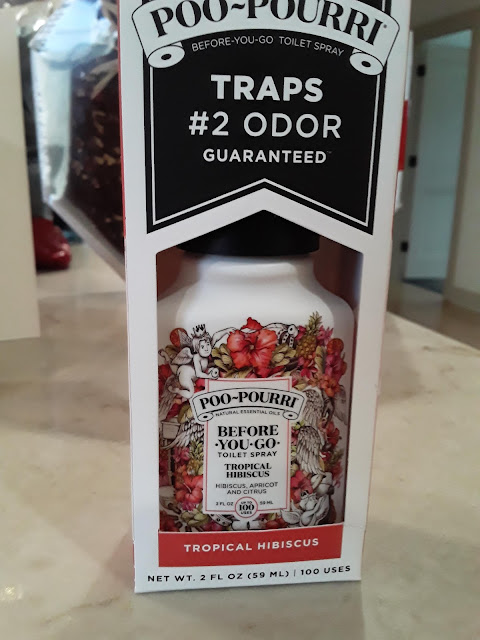 Dad says he can't even begin to pick a favorite, but these are right up there.  He's never been much of one for wearing any kind of "jewelry" except for the Libra pendant mom gave him eons ago, but he's always wanted a more natural wrist thingy, and he fell in love with this guitar pick-holder necklace mom gave him. 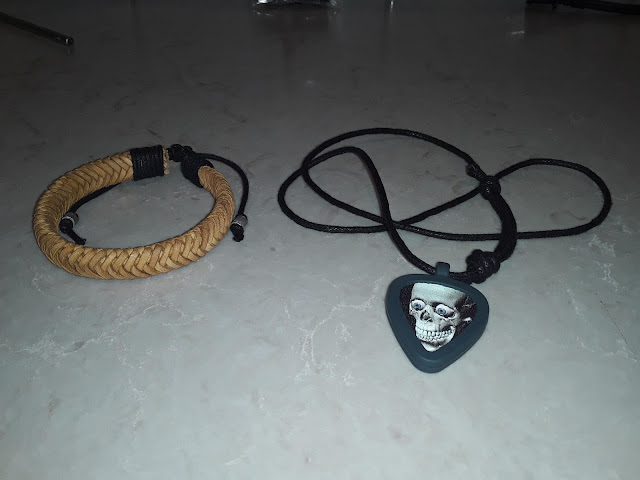 She put a special 3D pick in it that she gave him some years ago, and he says now he officially feels like the rock star he'd always dreamed of being.
As I said, dad cannot pick one favorite, but most certainly at the top is a binder mom says is a work-in-progress that she put together for him with all of the artwork and lots of photos of his grandkids from over the years.  This would be up there, too, 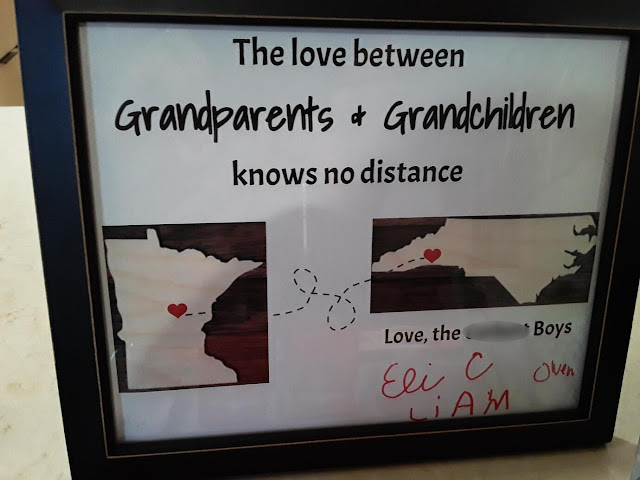 but the binder must've beat it because it made dad cry in front of me and mom.  If you remember, mom's sis up in NH had previously given dad a jug o' pure maple syrup since he's an addict, and when he opened this t-shirt from said sis he said he couldn't've said it better himself. 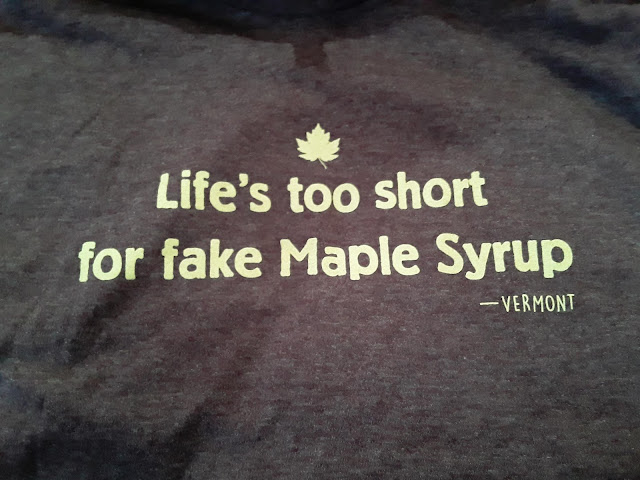 They wanted to do something a little different for Christmas dinner this year, so they'd decided on an easy, minimal prep all-in-one oven-roasted corned beef & cabbage feast, and they weren't disappointed, except for the fact that they thought there'd be more leftovers than there ended up being. 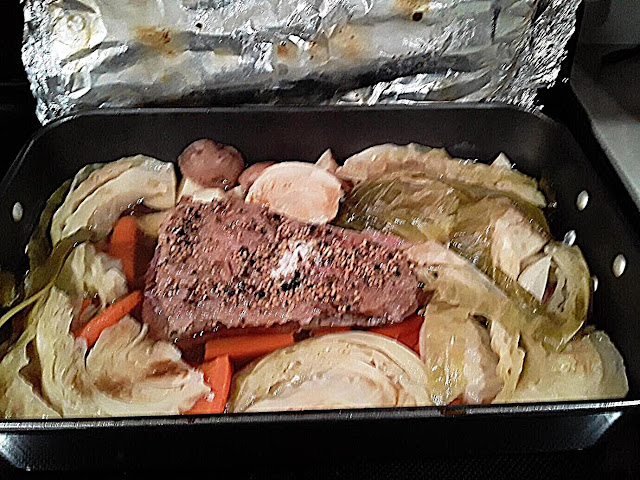 I'll apologize on dad's behalf for the poor focus here.  If I'm not mistaken, I believe he snapped this after a few rounds of the Saint Brendan's.  And finally, what's a holiday without beer?  Dad loves trying new ones, and mom didn't disappoint with this marvelous selection.
Now, you know how much I hate being left out of posts, so I'll end this one with me and dad working on our post-Christmas post post post thing, 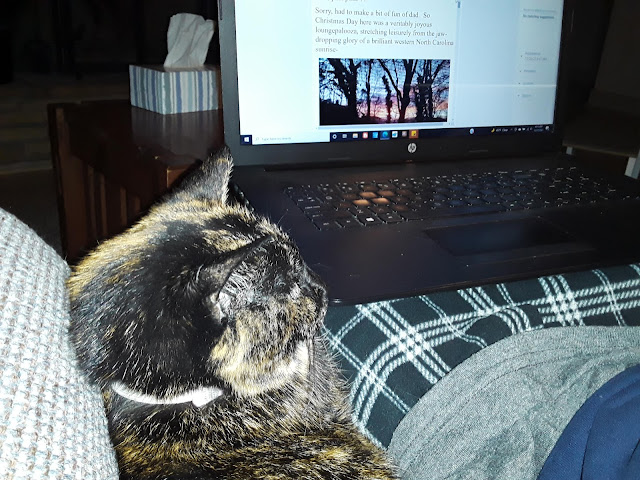 and our dorky group selfie.  They gave up after several attempts to get me to look at the camera which I fought because, well, cat . . .
Oh, and yes, that's that darn little Norfolk Pine, still kickin'!
Posted by Cleo at 5:24 AM

Cleo, what an absolutely marvelous Christmas weekend at your house. Wildlife outside and I don't know it looks like maybe wildness inside. Looks like it was a real Christmas Feast with lots of gifts and lots of food oh yeah and lots of drink. Now bring on the new year.

Cleo, we all know that you write blog posts by dictating it to your Dad and he types as a good assistant should! Reading/Writing is for lesser beings!
Merry Christmas as a happy new year!

I am glad you all had a lovely Christmas.

A fabulous Christmas you had. Thanks for sharing it with me and I love that cup. I laughed out loud.

Have a purrfect day, Cleo. My best to your fun peeps. ♥

Cleo do you think your Mom and Dad would consider adopting an old than dirt gal? OMCs you all know how to have fun and I do so love the mug. Corn beef is a favorite here. I normally cook it in the crock pot. Roasted looks divine.
Would your staff share the recipe?
Finally I love your family portrait.
candb214@att.net
Hugs Cecilia

We enjoyed your fun post sweet Cleo and I'm glad y'all had a mighty fine Christmas!

You guys had a wonderful Christmas! So did we.

Looks like you all had a wonderful Christmas. The "cologne" has been used by our Dad too. Actually, the need for it was a symptom of a serious health issue, and once that was taken care of, he didn't need the "cologne" anymore. So seriously, if that's something new for your Dad, he might need to go to the human vet. Hopefully it's just the beer & cabbage!

Those are all wonderful gifts. Poo pourri is cologne for the toilet- you spray it in before you go potty. They should make one for litter boxes. The grandparent gift is so sweet and true. Don't tell your dad, but I prefer fake maple syrup. :) Hope you and your folks have a happy and healthy new year. XO

It sounds like you all had a wonderful Christmas. Lucky girl to get your very own Advent calendar. The mom bean here doesn't find stuff like that but she did give me some real live dead chicken so there's that.

Oh and she says it's just as well you can't read Cleo. Who knows? Not me.

Aww, looks like a good time was had by all!
The Hubby watched sports on TV, and I read my book, so we had a humdinger of a day.

Cleo, it sounds like you, Mom and Dad had a most wonderful Christmas celebration! All those amazing and very special gifts -- that binder of the grands' art must be super awesome to make Dad tear up like that. Hugs to you all!

Smiling (a few turning into giggles) from top-to-bottom! With or without the cat who won't look at the camera, what an A+ 100% wonderful Christmas day in your home, even tho beginning before sunrise (and apparently Mom got up early on this one day? right?)
Put our names on the list as visitors next Christmas ... too much fun there to miss out on. No need to wish you all a Happy New Year, you've already got that nailed!

Wow, you did well! My two didn't get an advent calendar and I'm feeling a bit guilty about that now.

What a fabulous Christmas you all had. And Cleo...despite what that mug says...I don't think you're an a$$hole. ~Ernie

I'm so glad you had such a wonderful Christmas...and that our gift guide was helpful for you! MOL

Looks like you all had a most awesome Catmas, Cleo! (And our mom says "Mmmm, corned beef and cabbage!")

Charlee: "Hey look, Chaplin, it's a mug about you! Except that it says 'tortoisehell' instead of 'tuxedo' and 'sometimes' instead of 'always'."
Chaplin: "Ha ha ha very funny."

I did spot all four deer. :) And of course Wanderingcatstudio folks have it right. No self respecting (fortunate) kitty lacks a human servant.

Your family stories always make me happy. And that mug can... ahem... be suited for any (spoiled) housecat.

That looks like a fabulous Christmas, Cleo! The last two photos are our favourites, of course!

I am so sorry I am late reading this but it was well worth the wait!! OMG what a GREAT Christmas you had!!! Love that tortie mug (I have a Sheltie sweatshirt that says the same thing only obviously it's geared towards Shelties)....I also love something tasty in my coffee....Bailey's is my fave but I rarely have it anymore (other than last night lol).....love the photo of you both!! Sooo happy you had a wonderful holiday!